Support for State Question on Farming Rights Seems to be Slipping, Poll Suggests 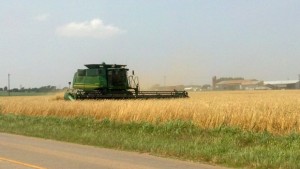 Support for State Question 777, which would make farming and ranching a constitutional right in Oklahoma, has slipped in recent weeks, according to a SoonerPoll survey commissioned by The Oklahoman.

Two weeks ago, the phone and and internet survey of likely Oklahoma voters found support for SQ 777 at 49 percent. Support now stands at 37 percent, the paper’s Ben Felder reports.

Forty-nine percent said they were against the state question and 14 percent remain undecided.

The survey suggests support for SQ 777 has eroded among Republicans, the paper reports:

“Based on the polling, you find that Republicans are beginning to abandon State Question 777,” said Bill Shapard, CEO of SoonerPoll. “We knew the Democrats oppose 777 because of environmental issues. But the polls shows us conservatives and Republicans becoming more against 777 because it establishes group rights and typically Republicans are for individual rights.”

The change represents the “most dramatic shift” in attitudes on state questions on the 2016 Oklahoma ballot, Shapard writes in a follow-up blog post, noting that SQ 777 “also has one of the highest percentages of those undecided at 14 percent.”

The measure amend the state constitution with language that would prevent the Oklahoma Legislature from enacting laws limiting livestock production, agricultural technology and ranching practices unless there’s a compelling state interest.

Shapard says groups urging a ‘no’ vote on SQ 777 are spending a lot of money. “He also said proponents might have waited too long to ensure their base as the campaign just recently came out with endorsements from Sen. Jim Inhofe and former Sen. Tom Coburn,” the paper reports.