The skies in the Oklahoma Panhandle are dark enough to view the Milky Way without a telescope. 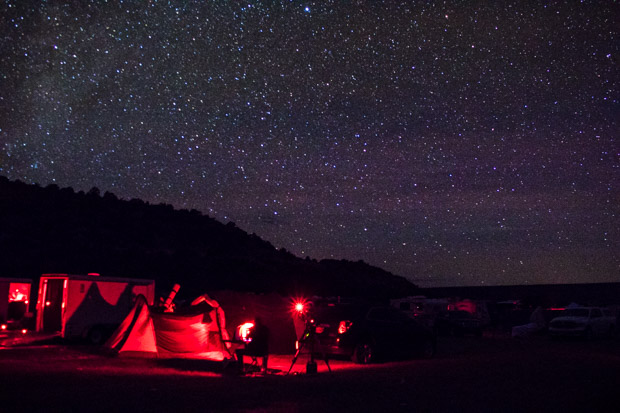 An amateur astronomer looks at chart on a red-filtered computer monitor at the 2016 Okie-Tex Star Party near Oklahoma's Black Mesa State Park.

The Oklahoma Panhandle is empty and hard to get to. The region attracts few people, very little industry and none of the light pollution that accompany both. It’s a remote location that’s earning a national reputation as the perfect spot to stare deep into space.

Terry Zimmerman adjusts the eyepiece on the 12.5-inch f5 Dobsonian he built from a kit — technical talk for a telescope that’s so tall, you have to climb a stepladder to take a peek.

“Right now I’ve got it set on M13,” he says, focusing the scope on the globular cluster of stars in the constellation Hercules. “It looks like a snowball or a popcorn ball.”

Zimmerman is from Amarillo, Texas. He and other members from his local astronomy club drove to the far northwestern corner of Oklahoma’s panhandle for the Okie-Tex Star Party. The week-long event continues through this weekend near Black Mesa, the state’s highest point.

Zimmerman says the plateaus in the desolate, shortgrass prairie near the tiny town of Kenton are the perfect environment for stargazing.

“You get away from the city lights, the light pollution,” he says. “The nice thing about here is you can get to see the stars, a lot of them, naked eye. You can even see some of the galaxies naked eye.” 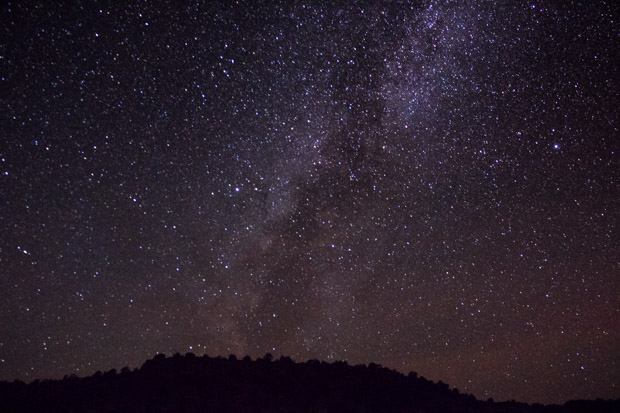 The skies in the Oklahoma Panhandle are dark enough to view the Milky Way without a telescope.

The starlight is immersive. It’s so bright, attendees can walk around at midnight without a flashlight — which is good because flashlights are banned because they disrupt night vision unless they’re outfitted with a red filter.

Fred Gassert, an elevator contractor from Wichita, Kan., who also serves as president of the Kansas Astronomical Observers, has set up his stargazing gear at the of a row of observers. The club brought several large telescopes, and Gassert pointed one at a low angle and focused on the fuzzy-edged Andromeda Galaxy.

Gassert turns his head and asks the shadowy figures behind him, “How far is Andromeda?”

Okie-Tex attendees were excited to let strangers look through their scopes and eager to lead the uninitiated through a deep space show and tell.

“It’s just to have fun, to enjoy the night skies,” Gassert says.

The people stretch the definition of “amateur” astronomers. They set up arrays of cameras with special lenses for astrophotography, unpack trailers and assemble banks of monitors and computer-guided telescopes, and camp in sleek RVs outfitted with red-filtered lights and blackout shades. 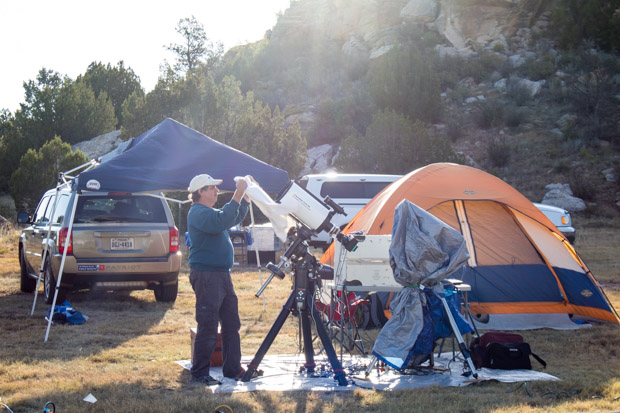 An amateur astronomer covers up his telescope shortly after sunrise at the 2016 Okie-Tex Star Party.

About 500 people registered for Okie-Tex 2016, including visitors from Australia, Canada and France, says Chairman Mike Dennis with the The Oklahoma City Astronomy Club, which organizes the annual stargazing event.

Gassert says the dark skies in Oklahoma’s panhandle, the clear weather and the 4,000-foot altitude around Black Mesa combine for the ideal setting.

“I would put it in one of the top star parties in the world,” he says.

In a nearby section of the campground, John Diller is swapping out eyepieces on his scope. Diller says he was retired when he took up amateur astronomy. He says he had to get a part-time job to help pay for his growing telescope addiction.

“We just like to spread the wonders of seeing the wonders of the universe,” he says, training his scope on a bright object known as the “Blue Snowball.”

The glowing flare is a glimpse of a violent cosmic past.

“It’s a so-called planetary nebula,” he says. “Basically, it’s a solar type star that gone through its evolution and puffed up and blew off its outer shell and that’s the outer shell that you see here. “

Diller, who drove in from Pittsburgh, says the popularity of the Okie-Tex Star Party is starting to create a bit of a catch-22. The setting is perfect because it’s empty and unspoiled by people — a quality that’s attracting large crowds.

“It’s pretty packed,” he says. “We came over the rise there right around noon and it looked like a small-scale city.”

Dennis, with the Oklahoma City Astronomy Club, says the group is planning to expand the footprint of the site for the 2017 event — a move that will give everyone more space to see space.

“It takes some special equipment to get the new area cleared, due to the presence of some particularly tenacious native cactus,” he says.