The Oklahoma Scenic Rivers Commission and audience members listen to a presentation on right-to-farm at the April 19 meeting in Tahlequah, Okla. 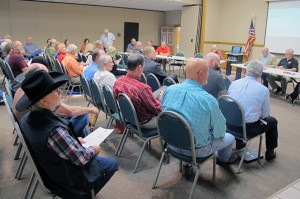 The Oklahoma Scenic Rivers Commission and audience members listen to a presentation on right-to-farm at the April 19 meeting in Tahlequah, Okla.

City leaders in Edmond adopted a resolution urging citizens to reject State Question 777. Their counterparts in Choctaw appear likely to do the same, and the Norman City Council has booked a presentation from an organization fighting against the question, which would amend the state constitution to include the “right-to-farm” and prevent lawmakers from passing legislation impeding farming, ranching and agriculture.

Choctaw Mayor Randy Ross told the Journal Record’s Brian Brus why he’s urging his residents to vote no on SQ 777 when they vote in November:

City leaders aren’t as interested in aspects of the ballot issue related to agriculture as they are in residents’ water resources and zoning, he said. The question has been framed by its proponents as protecting a right to farm; Ross sees it as a protection of local governance.

“Whether you’re rural or a city, you’re concerned about the impact of having no control over what’s happening within your city limits,” he said. “Under this state question, the city would lose all control over what happens to that property.”

The Oklahoma Municipal League, an organization that promotes laws and policies that preserve the authority of towns and cities, is urging local governments to oppose SQ 777.

John Collison with the Oklahoma Farm Bureau, one of the principal proponents of the right-to-farm amendment, “said he doesn’t understand why cities or the OML is even interested in the issue,” Brus reports:

When asked if any Oklahoma towns had come out in support of SQ 777, Collison referred The Journal Record to Guymon Mayor Kim Peterson, who is board president of the Mayors Council of Oklahoma and active in the OML.

Peterson, however, was reluctant to commit to one side or the other.

“To be honest, we’ve been approached, but we haven’t had a discussion about it and I doubt that we will,” he said. “We will mostly likely stay neutral.”