Oklahoma Department of Transportation engineers are testing an LED interchange light tower in the parking lot of its Oklahoma City headquarters.

As Cities in Oklahoma Update Streetlights With LEDs, Doctors Warn About Road Ahead 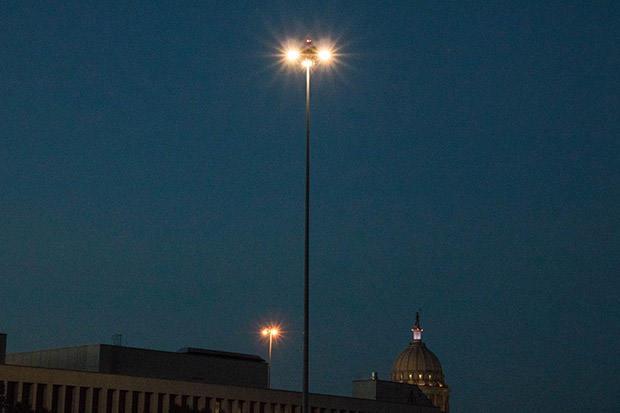 Oklahoma Department of Transportation engineers are testing an LED interchange light tower in the parking lot of the agency's Oklahoma City headquarters.

Cities across the state are hoping to cut down their electricity and maintenance bills by updating street and highway lights with new technology. LEDs save energy and money, but doctors say the lights could have unintended health and environmental consequences.

David Glabas opens the door and squints his eyes. At the Oklahoma Department of Transportation, the laboratory is outside.

Glabas, the agency’s assistant chief traffic engineer, cranes his neck and points to a tall tower. During daylight hours, the silver pole looks just like scores of others that light up state highway interchanges across the state. But this highway light is different.

“Well we’ve got three heads up there, and each head has got nine segments and each one of those segments has multiple LEDs inside of it,” says Glabas, the agency’s assistant chief traffic engineer.

LEDs — short for light emitting diodes — are a relatively new form of lighting technology. The state agency is testing the technology because cities are asking for them. Local governments pay for the power and maintenance of highway lights once they’re built, and city officials are turning to LEDs for the same reason residents and business owners are: They save money.

“It’s so good, I don’t believe it,” Tom Baker, director of the Downtown Coordinating Council in Tulsa, says about the energy savings of LED street lights.

Last year, the council installed LEDs in three street light pilot projects in Tulsa’s downtown corridor, including a mix of business and residential areas, and around the Blue Dome entertainment district.

But there’s a hitch.

“There’s a lot of discussion about the temperature,” Baker says. “We chose the 4000K.” 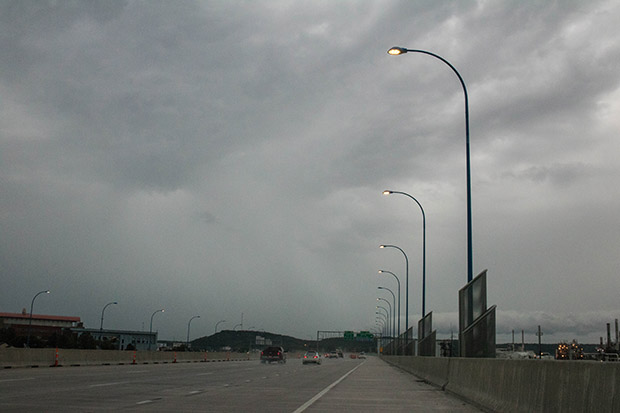 Tulsa has installed LEDs in the downtown area and along a handful of highways, including a section of Interstate 244 over the Arkansas River.

Motta is a medical doctor who has studied how lighting affects human health. He’s also an avid amateur astronomer who has researched the environmental effects of light pollution. Motta helped author guidance recently issued by the American Medical Association. The country’s largest organization of physicians now urges cities to avoid LEDs on the blue end of the color spectrum.

“It’s bad for human driving. It’s hurtful to the eye. It actually causes pupillary constriction, so you see worse in the dark,” Motta says.

“They’re sold as very energy efficient, eco-friendly, green because they use less electricity,” Motta says. “But as soon as they’re put up, the complaints start roaring in.”

LED street lights have received fierce backlash around the country, from Seattle to Brooklyn. The city of Davis, California, paid $350,000 to replace hundreds of LEDs with warmer units residents could live with.

City traffic engineering manager Kurt Kraft says Tulsa has been installing the bluer-hued LEDs — in both the downtown area and a handful of new highway projects — but said officials would consider changes if new science comes in.

“I think the consensus is more research needs to be done in looking at the longer term health effects and the exposure from street lights in particular,” Kraft says.

The AMA’s LED guidance has received pushback from industry groups, including the Illuminating Engineering Society and the the National Electrical Manufacturers Association, which responded with a statement, noting that “… spectral content should be one factor in effective lighting for outdoor installations. However, a single solution is simply not appropriate for all situations.”

The U.S. Department of Energy responded, too, noting that LEDs aren’t unique in emitting blue-spectrum light:

And as the potential for undesirable effects from exposure to light at night emerges from evolving research, the implications apply to all light sources – including, but by no means limited to, LEDs. Further, these research results are often also relevant to light we receive from televisions, phones, computer displays, and other such devices.

StateImpact surveyed several communities in Oklahoma where LED lights have been installed. Tulsa, Oklahoma City and Norman are all using units that exceed the AMA’s blue light threshold. Municipal adoption of LEDs for street and highway lighting is relatively new in Oklahoma, and isn’t yet widespread. Complaints and concerns from the public are minimal or nonexistent, officials say.

Dr. Motta hopes cities take their time. Since LEDs don’t burn out like regular light bulbs, cities might not change them for 10 to 15 years — or longer.

“It’s a decision that cities will have to live with for a very long time,” he said.