Fire crews work to reduce wildfire danger by clear brush through a prescribed burn in northwestern Oklahoma in April 2016. 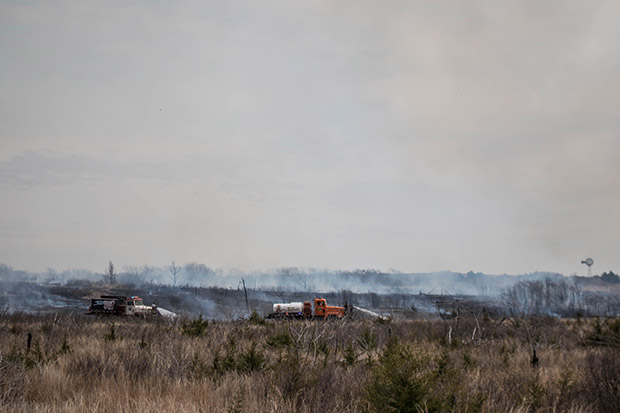 Fire crews work to reduce wildfire danger by clear brush through a prescribed burn in northwestern Oklahoma in April 2016.

Fire crews worked for nearly a week to contain a wildfire that started on March 22 and torched 574 square miles of land near the Oklahoma-Kansas state line, where it destroyed homes, killed livestock and damaged thousands of miles of fence.

But the Anderson Creek fire “cleared out more eastern red cedars in a week than local efforts to eradicate the invasive species could have accomplished in decades,” conservation experts tell the Associated Press.

“This was an ecological cleansing for the environment,” said Ken Brunson, wildlife diversity coordinator with the Kansas Department of Wildlife and Parks. “That’s mixed-grass prairie down there. Prairie survives with fire.”

Red cedars, also known as junipers, are fast-growing, drought-resistant trees that are useful for erosion control along canyon edges in the region’s Red Hills. But they’re a nuisance on prairie land because they crowd out native grasses, suck up moisture from the soil and reduce the amount of forage area for wildlife and livestock.

The prairie grasses rebounded quickly thanks to spring and summer rains. Conservation officials estimate it would have cost property owners $56 million to remove the number of red cedars eliminated by the wildfire.

At current budget levels, it would take 17 years to get it done.

Conservation officials are now urging residents not to squander the wildfire head-start and work to keep invasive red cedar growth at bay.