Bison on the Tallgrass Prairie Preserve near Pawhuska, Okla. 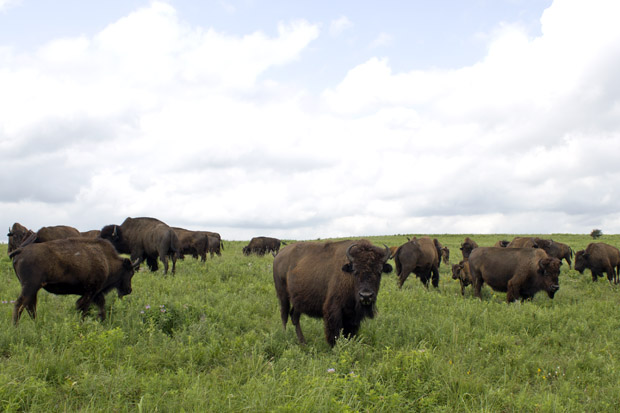 Bison on the Tallgrass Prairie Preserve near Pawhuska, Okla. The nearby ranch the Osage Nation is purchasing also has bison.

Osage Nation Principal Chief Geoffrey Standing Bear is on a mission. He wants the tribe to buy back as much land as possible in Osage County, where it owns less than 10 percent of the nearly 1.5 million acres it did in the early 1900s.

The latest move in that effort is a big one. As the Tulsa World’s Michael Overall reports, the Osage Nation reached a deal to purchase Ted Turner’s 43,000-acre ranch near Pawhuska:

The tribe paid $74 million for the property, where the media mogul experimented with environmentally friendly ranching methods and raised more than 3,000 head of bison as well as cattle.

…In a letter to Standing Bear, Turner said he was hoping all along that the tribe would become the new owner when he put the property up for sale.

“It is my sincere hope that our transaction is the last time this land is ever sold,” Turner wrote, “and that the Osage Nation owns this land for all future generations.”

Standing Bear hopes so, too. And he wants to keep adding to the Osage Nation’s real estate empire, with the tribe planning to launch a new effort next week to buy up small parcels of land from tribal members who can no longer live on or take care of their properties.

“We’re going to buy as much land as we can,” Standing Bear said, “and get back what has been lost.”

There’s also quite a bit of controversy over wind farms in Osage County. The paper reports the ranch is near the massive Osage Wind project, which the tribe tried to keep from being built. Ted Turner never allowed wind turbines on his ranch, and Standing Bear has also vowed to keep turbines out:

“The whole point is to preserve the land,” he said, “for our children and the future.”