Earthquake activity cracked a wall of a workshop used by monks at St. Gregory's Abbey in Shawnee, Okla. 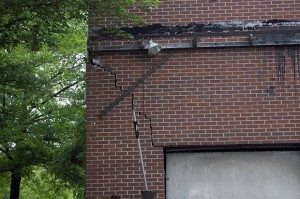 A wall of a workshop used by monks at St. Gregory's Abbey in Shawnee, Okla., shows cracks from nearby earthquake activity.

The U.S. Geological Survey on Monday released new maps and models showing Oklahoma has the highest risk for potential shaking from human-triggered earthquakes.

The first-of-its-kind report was based on information on the frequency and intensity of earthquakes throughout the country, but the analysis didn’t include data on the injection of wastewater, the oil-field practice scientists have connected to the upsurge of shaking in Oklahoma and other states.

The USGS report also does not “include changes to policies or wastewater injection rates,” either stemming from the state’s regulatory response or a slow in activity due to low oil prices, The Journal Record’s Sarah Terry-Cobo reports:

“It’s quite important to point out what the hazard is, but quantitatively, (the analysis) it is no longer relevant,” Zoback said.

Oklahoma Geological Survey Director Jeremy Boak said the USGS report is still valuable, even if it doesn’t reflect “a decline in earthquakes in the last half of 2015,” Terry-Cobo reports:

He said he’s interested to compare the next year’s report, which could reflect how policy and economic changes reduced earthquake levels.

“It will help regulators know where we stand and this is the risk we’re trying to mitigate by our actions,” Boak said.