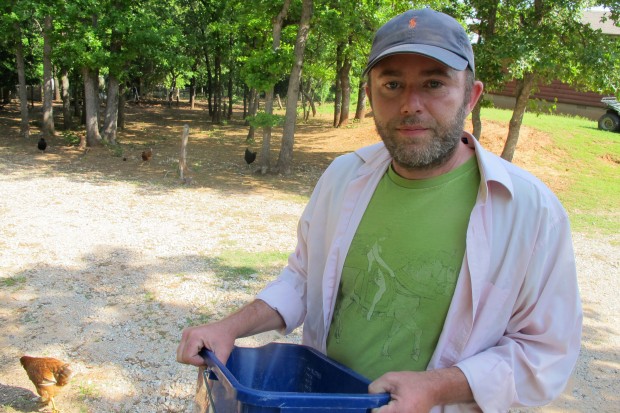 Dustin Green, owner of 10 Acre Woods farm near Norman and right-to-farm opponent, feeds a few of his 400 or so chickens.

Will Oklahoma be more like Missouri or North Dakota?

In Missouri, Right-to-farm — a constitutional amendment that broadly protects the agricultural industry from future laws and regulations — was a contentious fight that pitted farmer against farmer and forced a recount of the statewide vote. But in North Dakota, Right-to-Farm passed by a 2-to-1 margin.

Early indications in Oklahoma seem to show a big battle brewing. Rep. Jason Dunnington, D-Oklahoma City, two private citizens, and the water advocacy group Save the Illinois River filed a lawsuit March 1 challenging the constitutionality of the state question before it even gets to a vote of the people in November.

In a press release, the coalition bringing the suit says State Question 777 would equate farming and ranching practices to fundamental rights like freedom of speech and religion, and allow “Big Ag” to run rampant.

“State Question 777 amounts to a massive giveaway to corporate agriculture in a truly unprecedented way,” Save the Illinois River President Denise Deason-Toyne says in the release. “Oklahomans have a right to clean water, clean air, and food safety. This ‘Right to Harm‘ amendment strips them of those rights in favor of an industry that cares on about its bottom line.”

StateImpact has reported about how right-to-farm is really a fight between the Humane Society of the United States, which pushes for stronger animal welfare laws, and Farm Bureaus across the country, which push against those kinds of laws. Oklahoma is just the latest battleground.

The right-to-farm amendment is also being opposed by the Oklahoma Conference of Churches, the Oklahoma chapter of the Humane Society of the U.S., and the Oklahoma Stewardship Council, where former Oklahoma Attorney General Drew Edmondson serves as chairman.

“The world of industrial agriculture is changing with chemical additives to feed, growth hormones and genetic modifications,” Edmondson said in a statement announcing his opposition to SQ 777 in November 2015. “I can understand why they want to be free from scrutiny and regulation, but I cannot understand why we should let them.”

“These radical environmentalist groups have been defeated at the state Capitol and know they will be defeated at the ballot box,” Buchanan said in a statement after learning of the lawsuit. ““Water and its quality are of utmost importance to our state’s farmers and ranchers, as their livelihoods depend on it. Why would we support any measure that would jeopardize our state’s water?”