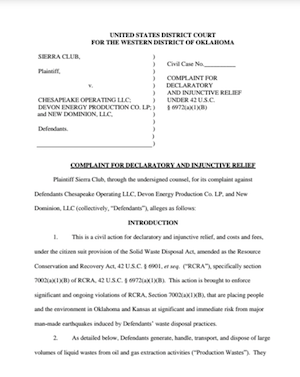 The lawsuit, filed in the U.S. District Court for the Western District in Oklahoma City, accuses Chesapeake Energy, Devon Energy and New Dominion of operating wastewater injection wells that have contributed to a massive spike in earthquakes in Oklahoma and Kansas.

The environmental group wants the court to order cutbacks at injection wells and force oil companies to reinforce vulnerable buildings. The suit also seeks the creation of an independent earthquake monitoring center.

The shaking is the subject of several lawsuits at the state level, but this is first action filed in federal court.

“People’s houses have had walls collapse, somebody’s had bricks fall on them, a tower fell down,” says Richard Webster, an attorney for Public Justice who’s representing the Sierra Club. “There’s not only potential for endangerment here, there is actual and large endangerment.”

Scientists say the industry practice of pumping oil and gas waste fluid into underground disposal wells is responsible for Oklahoma’s earthquake boom. The process is a government-approved process designed to lock toxic, briny “produced water” under layers of protective rock.

Representatives for the three oil companies declined StateImpact’s request for comment. A fourth energy firm, SandRidge Energy, was named in a November letter warning of potential legal action — a requirement for lawsuits under the federal Resource Conservation and Recovery Act — but the Oklahoma City company was not named in the Feb. 16 filing.