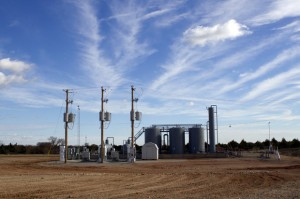 Fourteen Edmond residents filed a lawsuit Monday against a dozen oil and gas companies, “claiming their saltwater disposal wells were in part to blame for earthquakes that hit central Oklahoma in recent weeks,” The Oklahoman‘s Paul Monies reports.

The lawsuit, filed in Oklahoma County District Court, said the companies acted negligently and their use of disposal wells constituted an “ultrahazardous activity.” The nine homeowners said disposal wells operated by the companies “caused or contributed” to earthquakes.

The lawsuit stems from widely felt 4.3 and 4.2-magnitude earthquakes that struck near Edmond on Dec. 29 and Jan. 1 near Edmond. In their petition, the companies of operating disposals near Edmond and Oklahoma City “under conditions that Defendants knew or should have known would result in an increased likelihood that earthquakes or other adverse environmental impacts would occur, thereby unreasonably endangering the health, safety and welfare of persons and property, including Plaintiffs and others.”

The lawsuit seeks a permanent injunction to stop the use of 16 saltwater disposal wells operated by the energy companies.

“Mother Earth has spoken, and Oklahoma is in a dangerous, dangerous position,” said attorney Garvin Isaacs, who represents the Edmond-area homeowners along with David Poarch. “We must address this.”

Scientists say most of Oklahoma’s earthquake surge is linked to wastewater pumped into disposal wells.

The lawsuit adds to a growing list of quake-related court actions in Oklahoma, including two cases making their way through state courts: a personal injury and a property damage case stemming from the 5.6-magnitude quake near the town of Prague in 2011.