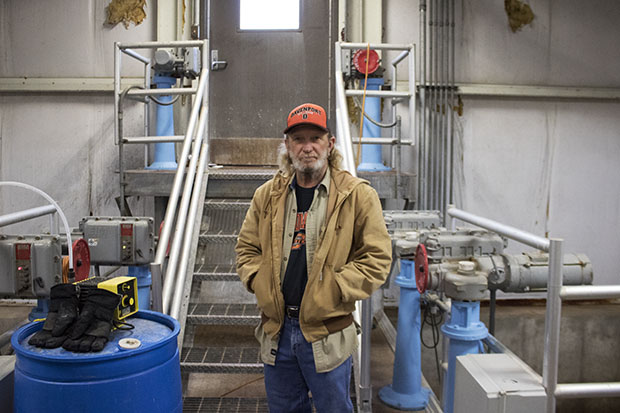 Many of the programs protecting Oklahoma’s air and land are paid for with fees and federal dollars. Oversight and inspection of local water systems, however, are funded by state revenue that has dwindled — and failed.

Chandler, a city of about 3,000 residents, like many small communities in Oklahoma, has struggled with deteriorating pipes and pumps, limited funding to make repairs and upgrades, and increasing demands to provide clean water to more and more customers.

The Chandler treatment plant provides water to its municipal customers, but the plant has also been tapped to deliver water to three rural water districts and residents in the nearby town of Davenport, says Chief Operator Tim Cross.

“We’re stretched out,” he says during a routine Department of Environmental Quality inspection conducted in January 2016.

Chandler has something else in common with a lot of small communities across the state: This water treatment plant is under a consent order from the Oklahoma DEQ — a type of legally binding improvement plan for local regulators struggling to meet federal water quality standards. There are 101 public water systems and 132 municipal wastewater systems under such consent orders, records show.

DEQ regional manager Vance Pennington led the inspection of the Chandler water plant. Pennington supervises a team of staffers who make sure local water regulators like Cross follow the rules and verify that water is safe to drink, and that wastewater discharged into streams and rivers isn’t polluted

Pennington records sensor readouts, asks questions and examines equipment. He checks out a room where hazardous chlorine gas is fed into pipes. The room’s exhaust fan and lighting pass muster, but he found a propped up wooden board filling in for a broken door latch.

“That’ll be a maintenance issue,” he says. “It’s a small thing, but it’s something I’ll have to make sure they fix.” 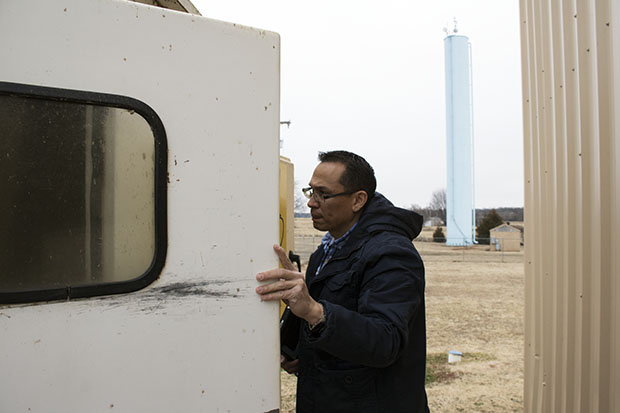 Vance Pennington, a regional manager for the Oklahoma Department of Environmental Quality, inspects a chlorine treatment system at a water treatment plant in Chandler, Okla.

DEQ, like many government agencies in Oklahoma, has faced years of cuts to its state appropriation and revolving funds. Federal money and fees provide most of the funding for DEQ’s air and land-protection divisions, but programs designed to regulate local drinking water and wastewater operations are funded primarily through legislative appropriations that have declined by roughly 30 percent since 2009.

“What will suffer in the longer term if we continue to receive general revenue cuts, is our ability to do some of the things that especially the smaller communities rely on the most,” says DEQ Deputy Director Jimmy Givens.

That stream of general appropriations has shrunk from tax cuts and structural changes to the state budget, and pushed to the brink by crashing oil prices. In December 2015, state finance officials declared a revenue failure and predicted a nearly $1 billion budget gap. Things could get worse next year, finance officials say.

Givens says, so far, the impact of the appropriation cuts has been “modest.” The agency used to have 39 field offices around the state; it now has 22. The number of staffers charged with local inspections and responding to complaints has dropped from 89 to 58. DEQ has managed to keep alive its most critical water programs, but Givens says it could be hard to continue to do so if state funding keeps decreasing at the same time federal water mandates are increasing.

“The EPA has the residual right to come in and do enforcement,” Givens says. “Nobody particularly wants that.”

Back in Chandler, supervisor Pennington has moved down the road to inspect the city’s sewage treatment plant. Once treated, the water from the smelly sludge in a series of waist-high concrete vats will be piped into a nearby stream.

A loud whooshing sound grabs Pennington’s attention and he runs his hand underneath a tangle of pipes. “It’s a small leak, but it needs to be looked at,” he says.

Pennington records the violation, like he did earlier when he found the faulty door at the water plant. He will return to make sure the operator makes the repairs, but Pennington says fining the small city won’t help it fix the problems.

“Small towns have small budgets. That’s a lot of the reason for the problems with their systems,” Pennington says. “We do issue fines when we need to, but we’re usually more focused on working with them to get things up and running.”