Hochatown, Okla. resident Charles Benton retraces the footsteps of a Bigfoot encounter he says he had five years ago.

Bigfoot is Scaring Up Stories and Tourism Dollars in Southeastern Oklahoma 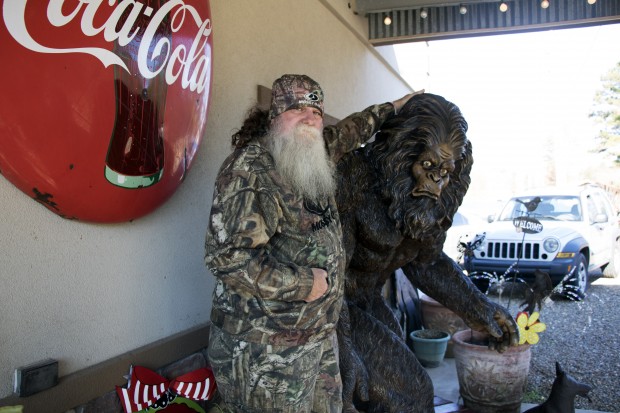 Charles Benton, who claims to have seen Bigfoot, stands with a statue of the creature in front of Janet's Treasure Chest in Honobia, Okla.

The stories go back for generations. Reports of something not quite human in the wooded hills of far southeastern Oklahoma. The legend of Bigfoot is growing in McCurtain County — and attracting tourists.

Charles Benton says he knows what he saw five years ago a few miles north of Broken Bow, deep in the woods near Hochatown. It’s where he says a turkey hunt turned into the scare of a lifetime.

“Behind me I could hear this moaning, this grunting. And I could feel it almost,” Benton says.

He’s tall, burley, with a weathered face and a long white beard — not Bigfoot, Charles Benton.

“I was on my all fours there for a minute,” Benton says, describing the experience. “When I got back to my knees and was getting up — see the trees that make kind of a ‘V’? Right there. In between those two trees, down there in that creek.”

He says the creature turned and looked right at him.

“I Ran up this hill, ran past my blind, my tent and all my camping stuff. Ran to my truck and never came back,” Benton says.

His equipment is still there, the colors of the collapsed tent and empty soda cans faded from years of sitting in the sun. And after chatting with people in Hochatown, it’s clear Benton’s story isn’t unique.

There are Bigfoot stories that go back generations in this area. There was even a low-budget 1972 horror movie called “The Legend of Boggy Creek” about a creature across the border in southern Arkansas.

It’s easy to find skeptics, too, like Michele Finch-Walker, who runs a winery in Hochatown. She works part time for the state forestry department, and isn’t convinced about Bigfoot.

“I don’t know. I really don’t think so,” she says. “But I hate to say that. It’s more fun to say you believe the legend.”

The curious come to Hochatown

Sharon Hill runs a blog called Doubtful News that puts a critical eye on monster stories, UFO sightings, and false-flag conspiracy theories. She’s seen this kind of thing before — like ghost tourism, or UFO attractions in places like Roswell, N.M.

“These small towns want a way to have a celebration and bring out people and help their businesses. So it’s definitely gaining popularity,” she says. “Dark tourism is big — some things on crime and death. And then there’s strange tourism when there’s like mystery spots, or anomalous lights, or new-age energy vortexes”

Hill has researched most of the country’s monsters.

“There’s Mothman. There’s also Lizard Man in South Carolina. In Wisconsin or in Michigan there’s the Dogman or the Wisconsin Werewolf,” she says. 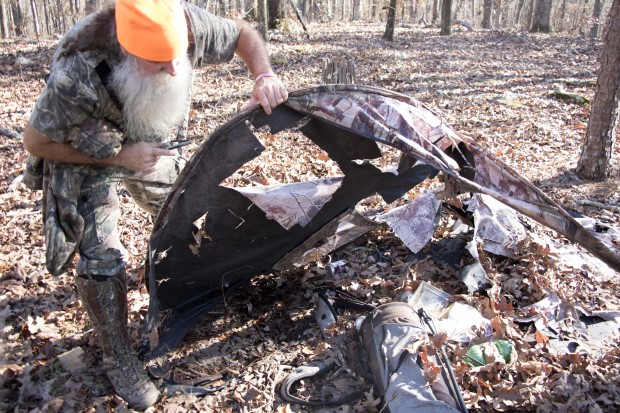 Charles Benton examines the destroyed campsite he says he ran from after seeing Bigfoot.

They all have one thing in common: They bring people to those places, like Janet’s Treasure Chest in Hochatown. Janet Cress runs the gift shop, as well as high-end cabins near Beaver’s Bend State Park.

She says someone comes to her store looking for Bigfoot trinkets everyday. The giant Bigfoot statue in front of the store draws them in.

“They’re either believers or nonbelievers or someone in their family or somebody at work, somebody they know believes in Bigfoot, all the time,” Cress says.

In Hochatown, there’s Janet’s shop and a new business called Bigfoot Jeep Rentals, and an annual Bigfoot festival in neighboring LeFlore County. Bigfoot marches in Broken Bow’s Christmas parade — or someone dressed like Bigfoot does.

This is a beautiful part of the state, with many attractions beyond Bigfoot. But real or not, the creature is leaving an economic footprint in southeast Oklahoma.