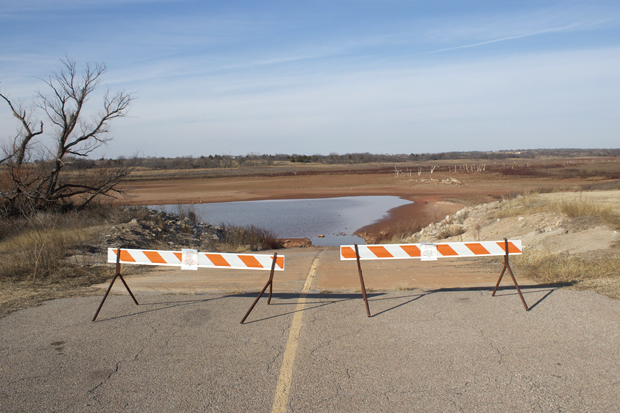 The biggest news out of the Oklahoma Governor’s Water Conference Dec. 1-2 was Governor Mary Fallin’s announcement of a working group to find alternatives to injecting produced water from oil and gas drilling deep into the ground. The goal is to reduce earthquakes, but also save water.

“El Niño probably helped in the spring, and is definitely aiding us now,” McManus said.

The state got a break with the ongoing ‘Godzilla El Niño’ in 2015, but McManus made it clear Oklahomans shouldn’t get too used to all the precipitation.

“Ocean patterns are favorable for now, but uncertain in the long term,” McManus said. “If we start to go into that pattern with lots of La Niñas, drought can come back in less than a year’s time.”

The conference included updates on how different regions of the state are planning for water sustainability, like in southwest Oklahoma, where communities that have relied on lakes for water for decades are turning more toward groundwater.

Groundwater got a lot of attention. The idea of pumping excess water into aquifers for later use is just now gaining traction in Oklahoma, but places like El Paso, Texas and Wichita, Kansas have been doing it for years. It’s called ‘aquifer storage and recovery,’ or ‘ASR,’ and it basically means storing water in underground reservoirs instead of lakes on the surface.

The environmental, regulatory, and financial hurdles are daunting, but not as daunting as building new lakes on the surface.

“[Surface reservoirs] tend to be expensive — a lot of upfront capital costs.” ASR expert Dr. David Pyne told the audience. “They have tremendous losses to evaporation and transpiration. … And these dams and reservoirs these days, they attract a lot of environmental opposition.”

The Oklahoma Water Resources Board organized the conference, which included discussions on climate change and reusing treated wastewater, and has several presentations posted on its website.