Pope Francis during a 2014 visit to the European Parliament in Strasbourg. 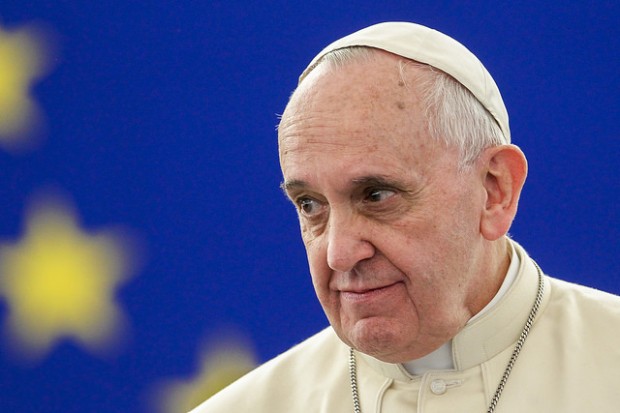 Pope Francis during a 2014 visit to the European Parliament in Strasbourg.

In a 184-page encyclical assigning moral responsibility to the fight against climate change, Pope Francis in June urged the world to phase out its addiction to fossil fuels.

But “in the heart of U.S. oil country” Catholic institutions “are leasing out drilling rights to oil and gas companies to bolster their finances,” Reuters Richard Valdmanis reports:

And in one archdiocese — Oklahoma City — Church officials have signed three new oil and gas leases since Francis’s missive on the environment, leasing documents show.

In Oklahoma and Texas, Reuters found 235 oil and gas leasing deals signed by the Catholic Church since 2010.

None of the Texas leases in the review were signed after the pope’s encyclical.

Those two states have been at the forefront of a boom in U.S. energy production in recent years, often through the controversial hydraulic fracturing production method, known as fracking.

It was not clear whether production on the Church leases was through fracking – a process that involves injecting sand, water and chemicals underground to crack open rock formations — or more conventional drilling methods.

“There may be some kind of inconsistency here between what the pope has said and what the Church is doing in U.S. oil and gas country,” said Mickey Thompson, a consultant and former director of the Oklahoma Independent Petroleum Association.

He added that since the Church often acquires its mineral rights through donations from parishioners, there could be “legal or fiduciary reasons” it has sought to lease them out. It was unclear if that was the case with the leases signed by Church institutions in Texas and Oklahoma, including the three leases signed in Oklahoma since June.

U.S. Catholic institutions have millions of dollars invested in energy companies, Reuters reports. However Bishops, not the Vatican, control investment decisions at individual dioceses in the U.S.

But the Church’s direct links to the fossil fuels industry through the Oklahoma and Texas lease deals highlight a potentially deeper moral dissonance in the wake of the pope’s unambiguous attack on human-caused climate change.

Oklahoma City Archbishop Paul S. Coakley signed the most recent deal on Sept. 3, giving privately held oil company Comanche Resources rights to operate on 160 acres in Major County in exchange for 18.75 percent of the value of the oil and gas produced.

An official at St. Gregory’s said the university had been given significant mineral rights by donors, adding that the royalties collected had averaged about $405,000 over the past three years, or 3.7 percent of revenue. The official asked not to be identified.

A review of audited statements issued by the Archdiocese of Oklahoma City between 2010 and 2013 showed that the oil and gas royalties made up 2 percent of total revenue, or $1.6 million, over that period. That share peaked in 2012 at 5 percent, or $704,399, according to the audited statements. The other Oklahoma institutions did not provide data.