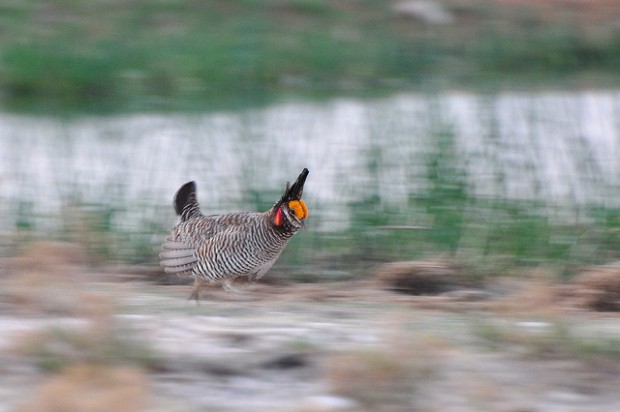 The ruling is a victory for the oil and gas industry, which “argued that conservation efforts are working,” the Associated Press reports:

The Permian Basin Petroleum Association said regulations would impede operations and cost hundreds of millions of dollars in oil and gas development in one of the country’s most prolific basins.

The birds live in the Panhandle and western parts of the state, a habitat shared with the oil and gas and wind energy industries. Oklahoma officials filed a lawsuit over the bird’s endangered listing.

The lesser prairie chicken is particularly sensitive to “habitat fragmentation,” and has been designated the species with “the greatest conservation need in Oklahoma.” Two million lesser prairie chickens used to roam throughout Oklahoma and four neighboring states, but in recent years, the population dropped to about 17,000, Allan Janus with the Oklahoma Department of Wildlife told StateImpact last year.

But now it appears the lesser prairie chicken populations are rebounding. From the AP:

… the Western Association of Fish and Wildlife Agencies says the population increased by 25 percent this year to 29,000 birds.

Opponents of the bird’s endangered listing said the resurgence was evidence that voluntary conservation efforts were working and that drought conditions, which have ended throughout much of the habitat, were one of the main reasons for the bird’s recent population decline.

The ruling is significant. The U.S. Fish and Wildlife Service will make “dozens of significant listing decisions over the next few years” and industry’s primary means to preempt those decisions is pushing for “voluntary” measures like the five-state conservation program, Lowell M. Rothschild, senior council for the National Law Review writes:

Many – like those for the sage grouse – are enormous undertakings involving millions of acres. It will take time to get these efforts negotiated, subscribed and implemented. Judging these efforts by a forward-looking examination of their potential success rather than a backward-looking review of their actual success will mean that they have a much greater chance at successfully fending off listings and should incentivize industry to keep creating and participating in them. And that’s good for both the species and for industry.