Workers harvesting wheat on a farm near Altus, Okla., in June 2015. 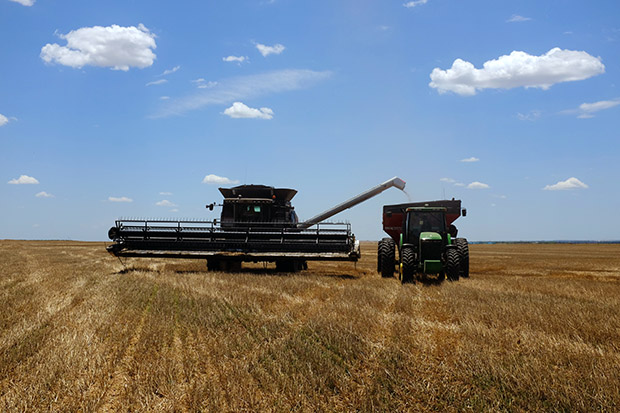 Workers harvesting wheat on a farm near Altus, Okla., in June 2015.

The decades-old embargo on trade with communist Cuba cuts U.S. goods off from what would be one of their nearest international destinations. That could be changing now that the two countries are restoring diplomatic relations.

While everything is still up in the air and nothing can be quantified, [Mark Hodges, contractor with Plains Grains Inc. and Oklahoma Genetics Inc.] predicts one-third or more of Oklahoma’s wheat production will get to Cuban soil if the embargo is lifted.

“We have high-quality wheat,” Hodges said. “When you look at logistics and quality, I would think we would be very high on their list of states to work with, and they’ve worked with us before.”

Currently, the wheat has to go through a third party country to get around the embargo, which makes trading wheat with Cuba too expensive, aside from the handful of times Cuba has imported U.S. wheat during emergencies.

With U.S. wheat not an option, Cuba gets it from France, but the paper reports French wheat is wet, clogs mills, and that Cuba would love to have access to the drier winter wheat that comes from Oklahoma. But problems would remain, even if the embargo ends:

American farmers say the main problem the U.S. runs into is providing credit upon arrival to Cuba. And in reforms President Barack Obama introduced in December 2014, that wouldn’t change.

“We’ll have to compete when it comes to price, but strategically it’s easier for us because we’re closer than any other country,” said Keith Kising, a member of the U.S. Wheat Advisory Committee.