The U.S. Army Corps of Engineers' Tulsa office snapped this photo of the Webbers Falls Lock and Dam in late May 2015. 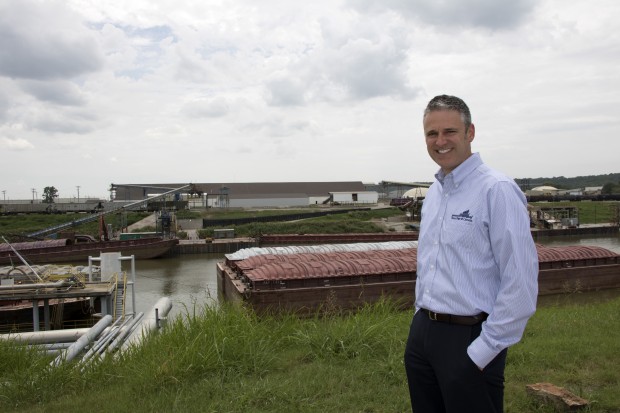 Port of Catoosa Deputy Director David Yarbrough stands at the across the the port's main dock, where a barge is being unloaded.

Two and a half million tons of wheat, fertilizer, steel, and manufacturing goods pass through the Port of Catoosa each year.

But not in 2015. The nation’s most inland seaport, located near Tulsa, shut down after historic spring rains and is still struggling to rebound.

From the Port of Catoosa, barges makes their way down the Verdigris River, to the Arkansas River and east to the Mississippi along the McClellan-Kerr Navigation system, Oklahoma’s water link to the Gulf of Mexico and river towns to the east like Pittsburg and Chicago. The waterway was the most expensive civil works project the U.S. Army Corps of Engineers had ever built when it opened in 1971, and it was pushed by powerful Senator Robert S. Kerr, of Oklahoma.

“There’s over a billion and a half dollars of private investment, just at this port,” says David Yarbrough, the port’s deputy director. “Eight thousand maritime jobs in Oklahoma.”

Navigation on the waterway stopped around May 15, Yarbrough says.

“We had several tow boats that were stranded,” he says. “They had come upstream with barges, and they weren’t able to go back because it wasn’t safe.”

The port remained closed until earlier in July. Even now, barge traffic is barely a trickle.

“Never in the history of our waterway have we had a shutdown that lasted like that,” Yarbrough says. 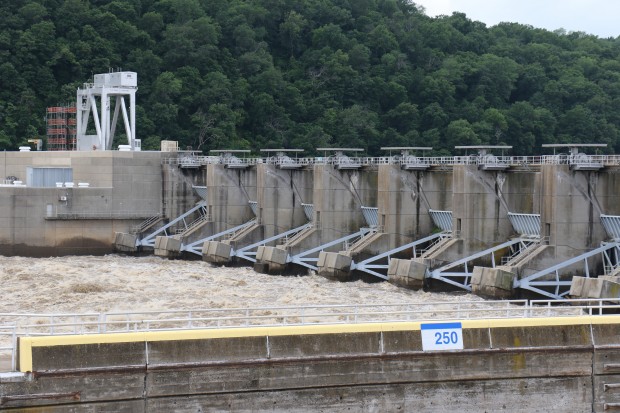 The U.S. Army Corps of Engineers' Tulsa office snapped this photo of the Webbers Falls Lock and Dam in late May 2015.

“A lot of our customers were reluctant to buy, because they didn’t know when the barges were going to show up,” Guettermann says. “Right now it’s recovering. We’re able to ship out now. Looking forward to hopefully a good fall crop.”

A few hundred yards away from Gavilon is CF Industries, which exports ammonia and liquid fertilizer. Plant manager Clint Herring worries the impact of the shutdown will still be felt by farmers later this year.

“It could really see impact on pricing, as well as availability of fertilizer,” Herring says. “But I also think the grain guys are going to have some issues getting material out. But they have alternative like we do.”

Those alternatives include shipping products by truck or rail, which is a lot more expensive.

The shutdown hurts these companies economically, but navigation is only part of what the waterway does.

At the Muskogee Port, which is downstream of Catoosa and also along the waterway, Port Director Scott Robinson says the primary purpose of the KM is flood control. When reservoirs like Lake Eufaula get too high, water is released into the river system, and that’s what makes the rivers unsafe for barges.

“Eufaula was the early onset problem in the navigation system. They had to release out of Eufaula, and the releases were so strong that it really halted traffic everywhere,” Robinson says.

But without flood control, the last couple of months would’ve been a disaster for eastern Oklahoma. And the flooding brings up an uncomfortable point:

“Maintenance needs of the system, particularly critical backlog of maintenance, are in the $100 million range,” Robinson says.

‘Critical’ means there’s a 50 percent chance that equipment could fail within five years, which could create costly, time-consuming delays at port operations.

“That sounds pretty scary to me and to others along the system,” Robinson says.

With an estimated daily economic impact of about $2 million, industries that rely on Oklahoma’s Port of Catoosa need drier weather and an infusion of money from the federal government, Robinson says.

Back in Catoosa, David Yarbrough says if the waterway is going to meet flood control and shipping needs in the future, U.S. Congress needs to fund its upkeep.

“Now we’ve gone from preventative maintenance to fix as fail, which is a bad way to be when there are no contingencies for one of our locks going out of business,” Yarbrough says. “We can’t detour around it. That’s it. And we’re headed toward failure to fix, because of the budget issues.”