The meeting was plagued by large crowds and problems with the sound system, and many residents left frustrated. 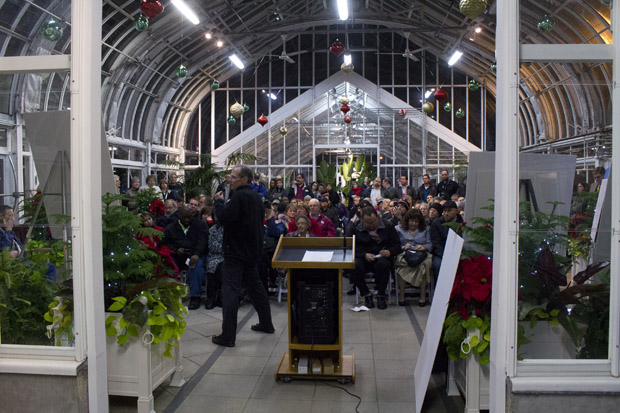 A representative for Pedestal Oil Company explains the Lake Hefner drilling proposal to a crowd gathered in the Ed Lycan Conservatory at Will Rogers Gardens. 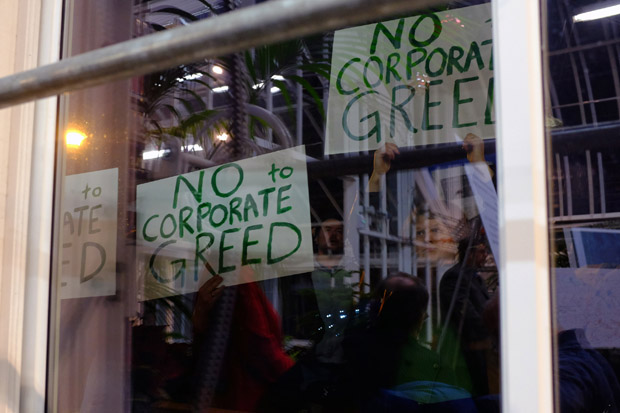 Protestors outside the meeting held signs and chanted “Stop fracking now” and “No more drilling.” 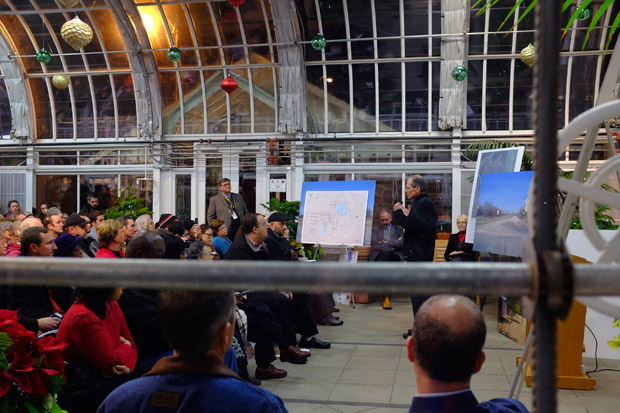 The conservatory was too small for the crowd. A second overflow meeting was held immediately following the first meeting. 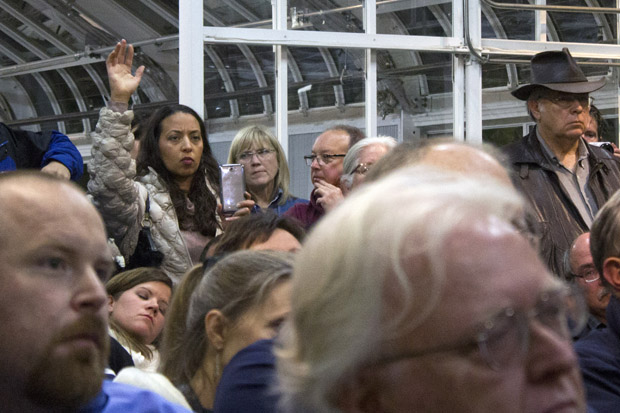 Attendees had questions and concerns about water and air pollution, truck traffic and noise, and earthquakes. 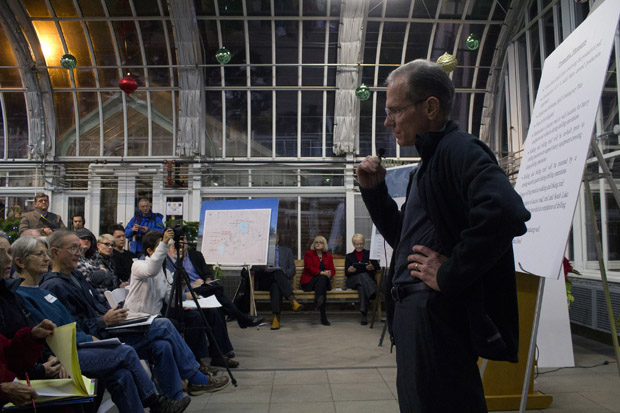 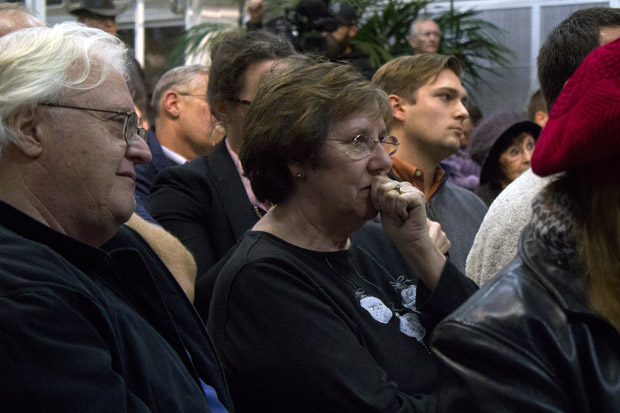 The meeting was plagued by large crowds and problems with the sound system, and many residents left frustrated.

A rowdy crowd of concerned residents shouted at city officials and questioned representatives of an oil company at a Thursday night meeting about a proposal to drill near Lake Hefner in Oklahoma City.

Hundreds showed up for the meeting, which was held at the Will Rogers Conservatory, a venue that was too small for the crowd. People formed a long line and waited in the rain to attend a second overflow meeting held immediately following the first meeting. Protestors gathered outside the building, chanting “Stop fracking now,” and “No more drilling.”

Many attendees were worried about possible contamination of the lake, as well as air pollution, while others were concerned about noise and increased truck traffic near popular paths used for running, walking and cycling. Some asked about the potential for earthquakes, which have shaken other parts of the state, and have been linked to disposal wells used by the oil and gas industry.

Many worried residents, like Holland Vandennieuwenhof, who lives in The Village, left the meeting frustrated with unanswered questions.

“I was particularly insulted that they did not handle it professionally, which gives us no confidence in their ability to run a more complicated operation like a drilling operation,” Vandennieuwenhof said about Pedestal Oil Company. “They can’t run a room with 50 people in it.”

Pedestal Oil Company wants to drill and, possibly, frack, to tap potentially rich oil and gas deposits that could be trapped more than a mile below Lake Hefner, which supplies drinking water to about 100,000 people.

The suggested drilling site is on the south side of the lake, on city-owned land near Stars and Stripes Park. A draft of the drilling proposal would pay the Oklahoma City Water Utilities Trust a 21 percent royalty, which would fund recreational improvements to Hefner and two other city lakes, Draper and Overholser.

City officials and representatives for Pedestal said the well pad would be cordoned off by a 6-foot high chain-link fence and would be isolated from the lake by an earthen berm. A security guard would be stationed near the site during drilling operations to manage truck traffic and park pedestrians.

Drilling in the City

Oklahoma City has more than 1,000 active oil and gas wells operating within the city limits, city records show. Operators have to follow state regulations outlined by the Oklahoma Corporation Commission and more-stringent city rules. This isn’t the first time Pedestal has approached the city about drilling near Lake Hefner; in 2011, the company made a similar proposal, but “several groups organized in opposition to the plan,” The Oklahoman‘s Paul Monies reports.

City officials are still gathering public comments on the drilling proposal, which would have to be approved by the Oklahoma City water trust and city council.

Pedestal’s president, David Singer, said his company has an “impeccable safety record,” and has drilled and operated oil and gas wells in Oklahoma City and other cities like Edmond, Mustang, Newcastle and The Village without incident. Singer also told the audience his home backs up to the lake.

“We use the walking and running trails and other features around the lake just like everyone else here tonight,” he said.