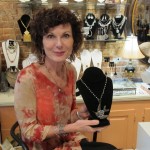 Assiah Russell started her jewelry business after getting lost in New York City in 2003. “I was in a jewelry district, took a look around, and thought it was quite wonderful to be lost there, and went into a store to buy some jewelry,” Russell says. “And they said, ‘Well no, no, no, you can’t be here! You have to be a wholesaler!’ To which I quickly replied, ‘Well, I am, and you’re my first vendor!'” 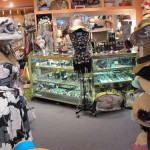 After a few years of selling jewelry out of her home and at special parties, Russell moved to her tiny shop on State Street. Five years later, she decided to move to the high rent Market Street. “I felt like my business had grown even during a recession. So I felt that the signs, for me, were pointing to making the move,” Russell says. 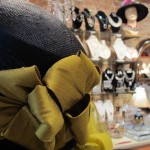 “It was a rather astronomical leap to move from State Street to Market Street,” Russell says. “The move has certainly allowed me to spread out and show my inventory better. I’m right in the center of the fashion district of Portsmouth. I’m hard to be missed.” 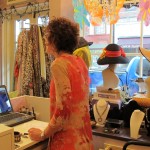 “It’s always a struggle,” Russell says. “I’m not trying to suggest that the streets are lined with gold. I think there is a recession and I think people are mindful of what they’re spending and how much they’re spending, to be sure.” 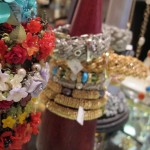 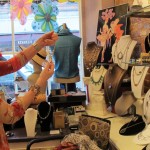 Although her first year on Market Street has been a good one for Russell, it, “Struck terror in my heart,” she says. “It was a calculated risk, along with a leap of faith. And when I got here, I think the exposure helped with the recession. I’m seeing more people here.”

As part of our weekly “Getting By, Getting Ahead” series, StateImpact is traveling across New Hampshire, gathering personal stories from the people behind the economy.  In our fourth installment, we visit a bustling boutique in the Seacoast region.

Walk down Market Street in downtown Portsmouth, and you’ll see clothing boutiques, a kitchen store, a toy shop. Then there’s Puttin’ On The Glitz.  And the name says it all.  Inside, 60-year-old owner Assiah Russell is fussing with mounds of jewelry resting on her countertop, preparing her window displays.

“Eventually everything will have a home,” Russell says, laughing.  “I just got done doing this window this morning.  I had to get up at five o’clock to do it, because I like to have it done before the store opens.”  Hands full of bracelets and necklaces, she gestures toward the finished product: Brightly painted mannequin heads sport wide-brimmed designer straw hats with pink, orange, and turquoise flower cut-outs dangling overhead.

But she’s not done yet.  Russell points to the far side of the store.  “Then this afternoon, because it’s a rainy day, perhaps I’ll get a chance to work on that window,” she says.

Russell’s store is a cacophony of color—with sequins and feathers covering every surface.  And as you would expect from a woman who makes her living selling accessories, she has the look of someone who has carefully thought about what, exactly, she planned to wear today.  And it just so happens to coordinate with the new plans for her window.

“This month, I want to show a lot of orange and a lot of turquoise, the colors for this summer,” she explains.

Russell first opened Puttin’ On The Glitz six years ago.  Until last year, the store was located in a tiny, 225-square foot space on a side street off of Market Street, the city’s main drag. Despite a couple of years of heavy construction right in front of her store, she saw her little business grow.  “And during that time,” Russell says, “I always kept my eye out for every space that came available in Portsmouth.”

Last year, she spied a promising space on Market Street.  In the world of Portsmouth real estate, that is a big deal.  The city’s colonial downtown is bursting with restaurants, shops, and a thriving arts scene.  It draws travelers from all over the world.  And one place where everyone goes when they visit Portsmouth is Market Street.  And the city’s landlords know it.  Russell says rents in the heart of this retail district are “going to the moon.”

Like many business owners, Russell doesn’t want to reveal her rent payment.  But high downtown rents are a controversial issue in this Seacoast city.  According to long-time downtown realtor Bill Mouflouze, it is not uncommon for retailers to pay anywhere from $40 to $65 a square foot on Market Street.   Those rents rival Newbury Street in Boston.  If you figure a Starbucks at about 1,000 square feet, that could mean up to $65,000 for a year’s lease.  Compare that to Concord, a city twice the size of Portsmouth, where a Main Street retail space downtown is leasing for $12 a square foot.  For the same Starbucks, that is a small fraction of the Portsmouth rent.

Despite a relatively healthy economy compared to the rest of the country, many New Hampshire downtowns have taken heavy hits.  Across the state, a number of businesses have drifted away from downtown cores and toward city outskirts, in the hopes of keeping more of their profit margins.  During a tough economy, Russell’s decision to expand might seem counter-intuitive.  And she admits, moving to Market Street last year was a big gamble.

“I had about three days to make the decision about whether or not to make this move,” Russell says.  “And I felt like, it was now or never.”  Then she pauses, conceding the risk. “The economy wasn’t necessarily the right time to do it.”

Since the economic downturn, Russell says she has noticed individual customers buying fewer items.  But she has still been able to make a living in her new shop.

“I think that the move has certainly allowed me to spread out and show my inventory better,” Russell says. While she’s waiting on the official word from her accountant, Russell has a hunch that her move paid off.  “This is the end of my first year here,” she says, “but I’ve certainly more than doubled my business in just making that move.”