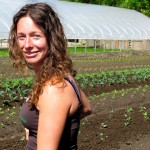 At 34 years old, Tracie Smith runs one of the larger farms in the Monadnock Region using the community supported agriculture model. “I started on a small scale, and over the last 15 years, I built it up each year,” she says. “But all of it was with the aim to follow my passion and grow good food. I’ve always been an idealist at heart.” 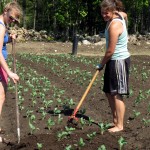 “We’re aiming every year to be able to keep our employees and pay them more and look into health insurance,” Smith says. “You can’t have a sustainable business if you’re losing people because you can’t offer them enough.” 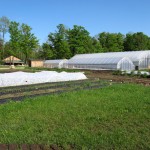 “By the time I pay for all the overhead, supplies, and just the pay that I’m paying them–which isn’t even enough, in my opinion–insurance is a tough thing,” Smith says. “It would make it almost not profitable for me. That’s my goal, to get to the point so they can justify coming back every year.” 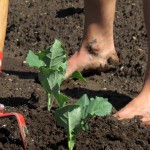 “Everyone was talking about universal health care, and it would be helpful to small businesses, I think, because it’s a huge cost,” Smith says. “But it doesn’t look like that’s happening, so I’m bound and determined to figure it out.” 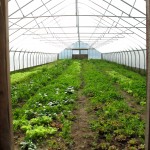 Since I spoke with Smith, she’s figured out how to pay for about half of her returning employees’ insurance premiums. “Whether we have to grow the business, which I keep doing, in the aim to make it more sustainable, financially, that’s what I’ll do,” Smith says.

As part of our weekly “Getting By, Getting Ahead” series, StateImpact is traveling across New Hampshire, gathering personal stories from the people behind the economy.  In our second installment, we visit a small farm in the Monadnock Region.

Tracie Smith has been selling mixed vegetables and herbs at farmers’ markets since she went to college.  At UNH, she studied environmental horticulture.  Today, at age 34, she still looks the part of a college hippie farmer, with her long curly hair and grubby jeans.

But as she inspects the crops at her farm near Jaffrey, it’s clear her casual looks shouldn’t fool you.  Smith is a determined businesswoman.  For the past 15 years, she has run a farm that uses a model called “Community Supported Agriculture,” or CSA for short.  It’s a kind of subscription program where customers buy a bulk “share” of Smith’s vegetable harvest during the spring, summer or fall.  And business is booming.

“This year we had about 30 spring shares, 320 summer shares, and last year we did 88 fall shares.  We’re aiming to do more this year,” Smith says.  “We also have a farm store onsite, where we sell items in abundance, as well as local goods.  And then we have a farm stand out front where we sell transplants.”

Smith is doing well enough that she’s expanding her farm.  Standing inside her newly built greenhouse, she points out some of the last crops to be harvested for her spring shares, which were mainly lettuce and bok choi.

Smith’s growing operation is a good example of what is happening across the Monadnock Region.  Situated away from any busy interstates, this rural corner of southwestern New Hampshire is relatively isolated.  That’s created a strong sense of localism among residents.

The area is well known for its strong Buy Local movement, and its growing demand for locally sourced food.  According to the latest Census of Agriculture, between 2002 and 2007, the number of farms in Cheshire and Hillsborough counties grew by about 30 percent.  Most of those are small farms, and many of them are CSAs, like Smith’s.

“Fortunately, the local movement sort of grew with me, just on accident, I guess,” Smith says. “It felt like more and more people, as I got bigger, were getting into it, so every year, the word spread that we were doing a good job here, and the farm just kept growing.”

Smith’s business model is simple.  “Every year, I have a new goal for the farm,” she says.  Five years ago, that goal was moving off her dad’s land and getting 33 acres of her own land that became Tracie’s Community Farm.  But now, her goal is to be a better employer. Smith has six employees who help her plant, hoe, and harvest her crops, do maintenance on the farm, and help her stock the store. She wants to offer her workers benefits.

“We’re aiming every year to be able to really keep our employees and look into health insurance.  That’s kind of our big goal right now,” Smith says.  “I really want this farm to be sustainable, and you can’t have a sustainable business if you’re losing people because you can’t offer them enough.”

A big obstacle for Smith is the high cost of insurance in New Hampshire.  Premiums here are among the highest in the country.  Since I spoke with Smith, the U.S. Supreme Court ruled the Affordable Care Act is constitutional.  But while many business owners were nervously anticipating the ruling, she decided not to wait for federal action.

“I don’t want handouts.  I really don’t,” Smith says. “That’s my job.  I’m not going to expect anyone else to figure it out for me.  I have to be able to figure out how to make the business be able to afford health insurance.”

Smith’s not yet in a position to pay the full cost of health insurance.  But what she can do is pay half her employees’ premiums–if they come back to work for another season.  For her part, Smith hopes this move will help keep her farm, and her workforce, sustainable in the coming seasons.

“That’s my goal, to get to the point so they can justify coming back every year.  And I think health insurance would be a big piece of that, since it’s such a huge cost for people,” Smith says.