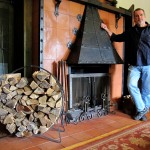 Ed Butler bought the Notchland Inn with his husband, Les Schoof, nearly 20 years ago. “It’s supposed to get easier as you get older,” Butler says. “But that has not been the case here.” 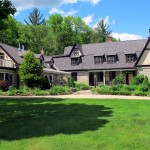 The Notchland Inn was built in 1862. It is a classic Mount Washington Valley business: Small, independent, and catering to a niche market of elopements, newlyweds, and romantic getaways. 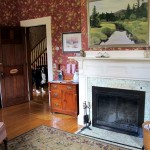 “There are some who succeed better than we have, who do have a little more breathing room as their businesses mature,” Butler says. “We are continuing to grow our bottom line. It’s just tougher doing it.” 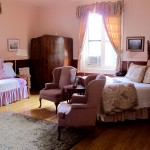 With the inn’s unpredictable bottom-line, it’s becoming more difficult for 62-year old Butler and Schoof to plan for retirement. “There are ways to survive, and we will survive, and eventually, not have to be here forever,” Butler says. “Or, if we are here forever, then we’ll eventually become gentlemen innkeepers, because after awhile, you can’t do all the physical work you did 10, 15 years ago.” 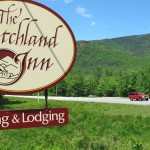 “The real challenge, I think, is that the national chains can take a hit if the economy is slow,” Butler says of the chains that have sprung up in the area over the past few years. “They can actually come in and invest money in ways that family-owned businesses can’t, necessarily, because we only have one business. We don’t have dozens.”

As the country continues to struggle with high unemployment and a lackluster economic recovery, New Hampshire is doing surprisingly well.  Unemployment is at five percent — much lower than the national average.  And more people are starting small businesses.  In our weekly “Getting By, Getting Ahead” series, StateImpact is traveling the state, gathering personal stories from the people behind the economy.  For our first installment, we visit the White Mountains, where independent country inns that have drawn tourists for more than a century face new competition.

Somehow, the Notchland Inn at Hart’s Location manages to be both sprawling and homey.  After 150 years — and some modernization — the big house still looks good.  It is one of numerous country inns, B&Bs and mom-and-pop motels that help make the White Mountains’ economy tick.  Surrounded by well-kept gardens dotted with purple lupine flowers and looking out on the green forested mountains, the inn provides its visitors an idyllic setting.

Ed Butler and his husband, Les Schoof, first came to the inn about 20 years ago.  They left New York City with one goal in mind: to be innkeepers at a romantic, upscale bed and breakfast.  They got involved in the community, and Butler served a couple of terms in the state legislature.  And they bought the giant Bernese Mountain Dogs that are a Notchland signature.

Until 2008, Butler says, things had been going rather well. Then the recession hit and the number of visitors from the Greater Boston area plummeted. “For the past several years, there has been a downturn in the economy that has affected our occupancy,” Butler says. “We haven’t raised our rates in, God…five years, at least.”

At first, Butler was able to stay afloat by cutting benefits for his housekeeping and kitchen workers and laying off a couple of staffers.  To make Notchland more competitive, he’s begun offering online deals through Groupon and Living Social.  It seems to be working.  Last year, profits went up nine percent.  Compared to some other innkeepers in the area, Butler has been fortunate.

“There have been several B&Bs and inns that have not been able to survive,” Butler says. “And there are some that have walked into the bank and left their keys.”

The White Mountains have a rich history of inns.  A century ago, a number of grand hotels also dotted the landscape.  And for a long time, they weathered economic ups-and-downs.  But now, Butler says, there’s a different dynamic at play.

“There are national chains that are coming to this area that weren’t here ten years ago,” Butler says. “And it has become much more of a competitive market.”

Take Memorial Day weekend. Notchland was busy, but not nearly as in-demand as it used to be. “In the past, we would have been filling up and referring people to other inns because we were full,” Butler says. “That doesn’t happen anymore.”

The chains have brought more jobs to the White Mountains, but for Butler, they’ve added more uncertainty.  He’s 62 years old, and wants to retire in a few years.

“The next generation of innkeepers are going to be less likely to take on a challenge like this unless they feel like the economy is rebounding.  And the question is, when the economy, and the business, will be ready for that,” Butler says.  “And you know, when someone walks through the door and says, “We love Notchland, and we want to live here!  We’ll talk.”

If they can’t sell the inn, Butler says he and Les will eventually have to hire more staff to deal with the daily work.  But to pull that off, they’ll need more revenue and a more stable bottom line.