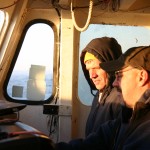 Ed Eastman (L) and Jim Pasnar (R) study a map to determine where they will drop the net for a three-mile trawl. 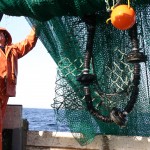 Jim Pasnar guides the 100-foot net onto its spool. Jim is attentive as he works in order to avoid entangling himself in the gear. 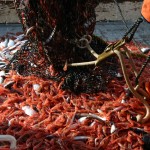 A mediocre catch of 150 pounds of shrimp pour onto the deck of the Sweet Carolyn. Eastman and Pasnar say it’s difficult to predict how good a trawl will be. 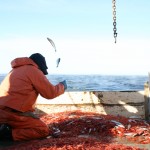 Pasnar spends about an hour on his knees sorting herring from shrimp. The sorting is all done by hand. 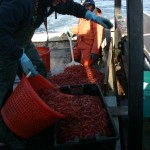 Ed Eastman pours shrimp into 100-pound buckets as Jim Pasnar shovels the catch off the deck. On a good day, they would pull in 12 to 15 buckets. This day only yields six buckets. Eastman needs to fill three buckets just to pay for the day’s fuel. Jim’s salary is 20 percent of the catch. 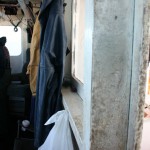 Ed Eastman speaks to his wife, Carolyn, on his cell phone while Pasnar minds the high-tension cables. 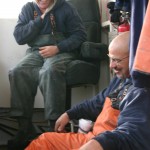 Eastman and Pasnar take a break. There is little downtime in their 14-hour work day. 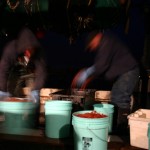 This week, commercial fishermen began trawling the seafloor off New Hampshire for cod and other signature New England catches. But Ed Eastman, who has been groundfishing off the coast for 31 years, was not among them. Regulations governing groundfishing became too burdensome, he says, and he could no longer earn a living wage.  Last year, Eastman sold his groundfishing permit and moved on to other fisheries, like shrimping.

It was a decision years in the making.

In 2009, when Eastman was still groundfishing, his wife Carolyn pushed the family into a community-supported fishery. CSF’s are modeled after community-supported agriculture.  That’s a system in which farmers sell local customers a farm “share” at the beginning of the growing season, and in return, they get weekly batches of fresh produce. Fishermen in Port Clyde, Maine, borrowed the idea in 2007, and since then about a dozen CSF’s have popped up in New England.

Why Commercial Fishing’s An Endangered Industry

This system inverts traditional fishery economics. Instead of selling his catch to the local cooperative for a non-negotiable price, Eastman says, he was charging a premium to 500 shareholders. The couple’s income tripled–but so did their expenses and workload. They could no longer rely on the market to process, distribute, advertise and sell the catch.

“We had to go to a bigger scale or stop,” Eastman says. “We couldn’t do it anymore.”

Nowadays, Carolyn Eastman does her best to ensure that her husband squeezes every penny he can from every pound of seafood he catches. “My wife can sell anything,” he says of the woman he named his boat, Sweet Carolyn, for. Though they quit the CSF last year, Carolyn kept the contact information of the 1,000 shareholders and customers she met at farmers markets. So while Ed is out on the ocean, Carolyn lures customers to meet him at the dock after sunset and sells the catch directly to the public for a higher price than they could get wholesale.

But the big factor working against Eastman’s groundfishing business was the change in federal regulations.  Under the old “days at sea” system, fishermen were given a set amount of time to basically catch what they could.  But since 2010, the federal government has regulated groundfishing through a sector management system. Groundfish are a diverse group of fish that live on the bottom of the Gulf of Maine. Many of their names are familiar, like cod, haddock, pollock, flounder, and halibut.  Others are less well-known: Plaice, whiting, redfish, and ocean pout.

“We had to go to a bigger scale or stop. We couldn’t do it anymore.”–Ed Eastman
Under the new system, fishermen are pooled into groups, or sectors, and there is a quota for each species in that sector.  Toward the end of his groundfishing days, Eastman was permitted to catch a certain weight of halibut, haddock, and so on. His cod quota was determined by the amount of cod he had caught between 1996 and 2006. Those were very poor fishing years for Eastman, and they came back to haunt his business later.

“In the fishing industry everyone is in a state of flux,” Carolyn says. “No one can afford to fish only one fishery anymore. It’s obsolete.”

But catching shrimp, as Eastman did this winter, is not paying off. The catch is unpredictable. This income must cover fuel, gear, permits, and the wages of his sternman. At the end of the season – after five or so weeks on a temperamental sea – Eastman just broke even.

Niaz Dorry, the Coordinating Director of the Northwest Atlantic Marine Alliance, says sector management squeezes small-scale fishermen out while permits are collected by larger boats. “The fishermen with the smallest ecological footprint are left out,” Dorry says.

Small boats receive small quotas – too small, in Eastman’s case, to make a living. It’s called consolidation, and Dorry says it’s happening in New England. Between 2007 and 2009, the top 20 percent of groundfish boats earned approximately 77 percent of the industry’s revenue.

“If you have any kids, you want them to stay away. Send them to college.”–Ed Eastman
In 2010, the year sector management began, the top 20 percent of boats earned 86 percent of the revenue.

But there is more at work than changing regulations. A couple generations of overfishing are not helping, while shifting reports keep fishermen skeptical of scientific stock assessments. In 2008, fisheries scientists said the cod stock was doing pretty well. Then last fall, they estimated that the 2008 assessment had been off – by 68 percent. Scientists say the change was due to new data and new modeling techniques, but that’s a bitter pill for fishermen to swallow. Based on the new assessment, federal regulators cut the upcoming season’s cod quota by 22 percent.

Fishermen are bracing for steeper cuts next year because the cod stock is supposed to be rebuilt from overfishing by 2014, a mandate of the Magnuson-Stevens Fishery Conservation and Management Act. “Rebuilt” means there must be a certain amount of breeding adults in the population. The target is 62,238 metric tons. “The important thing to note is that spawning stock…has not approached even half the target since 1982,” says Teri Frady, a spokeswoman for the National Marine Fisheries Service.

The cod stock has increased a bit in recent years, but it is still only about one-fifth of the way to being considered “rebuilt.”

No Future In Fishing?

Ed Eastman predicts the next few years “will tell the tale.” With groundfishery open, commercial fishermen will trawl the seafloor. Cod will be netted with the pout, flounder and halibut, and many fishermen will be forced to stop fishing for all species once they hit the cod limit. That’s why cod is called a “choke species.” Some fishermen will opt to sell their permits or lease their quotas to others who can afford it, increasing consolidation in the fishery.

As for the Eastmans, selling their permit for groundfishing earned them about $475,000 – a significant portion of which went toward the boat mortgages. Now Eastman has no debt, a milestone for a New England fisherman. Since he only broke even shrimping, he is now focusing more on lobster and herring, which he uses to catch lobster. He’s also running charters for tourists.  Eastman is not certain about his future as a fisherman, but he is quite clear on the future of New England’s fisheries.

“If you have any kids, you want them to stay away,” Eastman says. He and Carolyn have three children. “Send them to college,” he says.