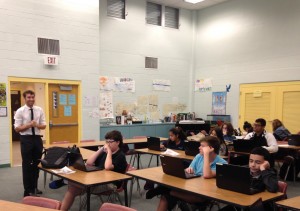 But while that effort is being debated, a computer science advocate in the Keys isn’t waiting for the state to pass a law. He’s putting his own money into the push for computer literacy.

The coding/foreign language bill is not without opposition. State Senator Jeff Clemens summed it up this way:

Miami-Dade Schools Superintendent  Alberto Carvalho is also an outspoken critic, telling the Miami Herald that, in his view, coding and foreign language are not interchangeable.

Carvalho says the bill would put college applicants at a disadvantage. While the bill requires state colleges to accept the coding credits in lieu of foreign language, most other colleges would still be expecting to see that students had taken a foreign language.

But the bill’s sponsor, Senator Jeremy Ring of Margate, says computer science is a basic skill that every student must have. “You can not do a job in this world — construction, media, politics, law, medicine — whatever it is, unless you have an understanding of technology, or you will be left behind,” Ring said.

John Padget of Key West agrees. Padget is the Vice Chair of the state Board of Education and founded a program called Monroe Computes, in which he pays kids in Monroe County to take computer classes.

Padget says Florida lags the rest of the country when it comes to computer science,  and Monroe county, he says, in behind the rest of the state. He says he felt he had to do something.

“We saw a real opportunity to jumpstart computer science and coding learning in Monroe County, and we’re doing it,” Padget says.

Padget and his  partner Jacob Dekker put $100,000 towards the program. They’re paying students up to $500 to finish a Microsoft Office specialist certification. He concedes that Microsoft Word or Excel are not really coding courses — but says it’s a place to start, and are sparking interest in going further.

Keys Collegiate Academy Senior Ryan Sziko took Padget up on his offer, and lists the reasons why.

Padget  says coding is a crucial skill and he encourages any initiative to develop computer science learning in Florida. But when asked about the  lawmakers current proposal, and whether coding could be considered a substitute for a foreign language, Padget says ‘no.’ It can’t replace foreign language, he says, which is a window to the wider world.