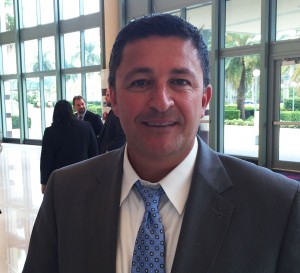 For weeks now, Palm Beach County schools have struggled to get students to classes on time.

Bus routes have been redrawn. And the district sent up flares, looking to hire anyone who wants to drive a bus.

It’s the first crisis new superintendent Robert Avossa has had to face since taking over the job in June. And he says it could have been avoided if district leaders had listened.

“The lesson to be learned is that our bus drivers, right? Sort of the low man on the totem pole,” Avossa told a gathering of business leaders last week, “were waving the big red flag to the management over in transportation saying ‘We have a problem.’ And the management decided not to listen…That’s problematic.”

Avossa has traveled all over Palm Beach County to find others with similar advice about how to run the district.

In July, he met with teachers, principals and social workers to figure out what to do about bullying. People worked together in small groups, and at the end of the afternoon, sent Avossa a list of ideas. He’s met with charter schools leaders and held events for parents and students across Palm Beach County.

But while he’s listening, the 43-year-old Avossa is also bringing plenty of big ideas with him from his previous job in Fulton County, Georgia.

“Incremental steps are not going to help Palm Beach County schools become the best in the state,” Avossa says.

Avossa says a priority is making sure students aren’t struggling just because their family makes less money or the student doesn’t speak English.

Born in Italy, Avossa had to learn English when he arrived in Florida. So he understands the added challenge students learning English face. Like many Florida districts, Palm Beach County schools have seen a surge in immigrant students – particularly from Central America.

More than 100 languages are spoken in the homes of Palm Beach County students.

Avossa tackled graduation rates and SAT scores in Georgia. By the time he left — both improved.

And big ideas sometimes means being disruptive. He fired, forced out or reassigned dozens of principals at low-performing schools in his old district.

In Palm Beach, Avossa is already talking about principals as a way to improve schools.

And like in Georgia, Avossa will ask lawmakers for a new state law to allow his district to ignore some state education laws. Imagine taking five hundred pages of rules and throwing half away.

Schools would probably still have testing and state grades, but each Palm Beach County school could pick and choose what works best for them.

Both of his kids go to Palm Beach public schools, and Avossa wants students to have classes as unique as the personalized Nikes his son orders online.

“In five minutes he designs his own shoe. It’s at my house from China in two days,” Avossa says. “That same child who has that customized world at home then comes to the school house and sits in perfect little rows. Asked to open up a book…and read what everybody else is reading.”

In other words, no summer vacation. But he thinks students who have the lessons down cold should be able to move faster. Let Florida’s brightest students move as fast as they can. Maybe graduate early.

And as if all those issues aren’t enough, Avossa says Palm Beach County has another problem: affordable housing. It’s one reason why the district is having trouble finding enough bus drivers. And thousands of school district employees can’t afford to buy a home.

“A lot of people say that they’re going to reach out,” she says. ‘My first hundred days I’m going to talk to a hundred people and find out what the real problems were.’ He counts the people that he’s spoken to in the thousands…I mean his capacity is huge. I’m amazed at what he’s done in his first three months here.”