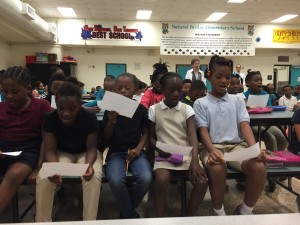 As soon as the fourth and fifth graders at Natural Bridge Elementary were handed the lyrics to Amazing Grace, they were ready to sing out.

But first, they needed a lesson in the four voice types of a choir – bass, tenor, alto and soprano.

One by one members of the group added their part while the students waited to sing the melody. Finally, it was time to add soprano Sara Guttenberg

The students are ready. They join in before the conductor gives them their cue.

Natural Bridge Elementary has maintained its music classes even as schools across the country have eliminated them.

In Miami-Dade those decisions are made by each school.

For this school in North Miami, music is important. Many of the students are Haitian or Caribbean immigrants and still adjusting to school in the U.S. 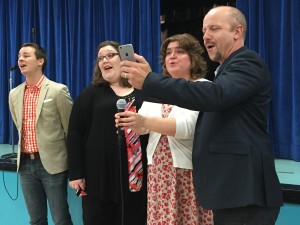 And principal Frank MacBride says he can connect with almost every student through song.

“The kid may not be straight As,” he says. “The kid may not speak English, but he may know “Amazing Grace” from sitting in church. And he can sing. And he may want to try to sing.”

In past years, MacBride encouraged dozens of Natural Bridge Elementary students to join the Miami Choral Academy. Seraphic Fire taught choral music and theory to Miami students through the program.

Students rehearsed after school and put on a performance at the end of the program.

And he says they became better students in general.

But this year the Miami Choral Academy lost their grant — and the full-time staff that helped students rehearse and put on a concert.

So the two-time GRAMMY-nominated group figured out a way to keep working with students. 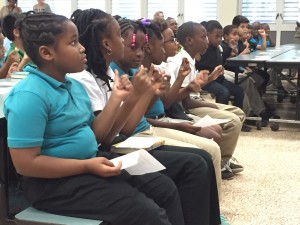 They plan on giving lessons to about a thousand Miami-Dade students — which is actually a lot more than could join the Miami Choral Academy.

It’s not their first time in front of a classroom. All four Seraphic Fire members visiting Natural Bridge Elementary have been teachers – from elementary through college.

“The one thing you learn right away when you teach that age,” he says, “is you can’t have dead air. You must keep the activities going.”

The four Seraphic Fire members run through songs with the students for more than hour.

They start with some call and response sounds to warm-up the vocal cords.

“TSH! TSH!” the students call back.

They lead the students through more call and response to a summer camp tune before moving to the harmony lesson of “Amazing Grace.”

Before ending the lesson, Bass asked students what they like about singing the songs.

A student raises his hand.

“It made me feel confident,” he says, adding it’s fun to sing loud.

“Because you’re not put on the spot,” she says. “You don’t have to be the one everyone’s listening to. You can just be part of a group and so you can be a little bit safe, but you’re immediately engaged.”

When Seraphic Fire performs a concert in December, these students will be in the audience.

And in January, Seraphic Fire members will be back at Natural Bridge Elementary to talk to students about what they heard.