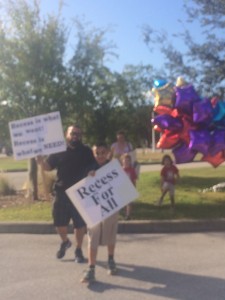 Remember recess? When you knew that if you just sat still for a couple more hours, you and your friends could go racing out to the merry-go-round or the hopscotch court for a daily dose of fun? In many public elementary schools in Florida, recess has become a thing of the past. And parents are not happy.

Five year old Garrett Hoskins goes to Highlands Grove Elementary school in Lakeland. He’s in kindergarten, and he loves recess. He’s kind of an authority on the slides.

“The slide I like is the bumpy one,” Garrett says. “I like the circle one because that one has sides. The other one doesn’t really have sides. Just short sides, to keep you safe.”

Garrettt goes to recess once a week, on Fridays, for 20 minutes. His mom, Stephanie Hoskins, says that’s not enough.

“Not for bustling five year olds, no,” she says.

They were at a community meeting recently, organized by Polk County school Superintendent Kathryn LeRoy. LeRoy  was responding to a growing and increasingly vocal demand by parents to give kids a break during the school day.

At the meeting, the frustration was palpable. Parents were supposed to ask questions by writing them down on a card and turning it in — but one mom, sitting in the audience, couldn’t contain herself. She said her eight-year-old son hates to go to school.  “He loves being outdoors and he gets no time,” she said. “He has to sit in a classroom from 8:30 until 3 o’clock. He goes to lunch and they’re not allowed to  talk at that time either.”

It probably came as no surprise to these parents when LeRoy presented the research showing the recess is important to kids in lots of ways, physically, socially and cognitively. The American Academy of Pediatrics calls recess crucial to child development.

Superintendent LeRoy told the crowd that she’s all in favor of recess. She said she was forming a county-wide committee to come up with recommendations, and she’d take them to the school board for a vote. But, she said, it’s not as easy as it once was to send the children out onto the playground.

Pointing to the wording of a state education statute that she’d projected up on a screen, LeRoy said, “The reason I am showing this to you is because I want you to get a sense of the magnitude and mandates that are laying on top of us….We are required to teach reading, writing, math, science, social studies, art and music (those are electives), and physical education.”

There’s also a requirement of 90 minutes every day for reading instruction — and more for low performing schools.

The state has made no policies regarding recess, leaving it up to the individual school districts. Some districts have no recess in schools. Others, like Miami Dade, require it for Pre-K through 5th grade. Miami-Dade even has a recess manual, that describes how to teach Double Dutch and hop scotch!

Time for recess has been squeezed out in recent years, but now social media is helping parents, such as Lakeland mother Amanda Lipham, organize recess supporters.
Lipham says she organized the push for recess in Polk when she saw changes in her five year old son.

“He was losing his enthusiasm for school,” Lipham says. “His attitude was changing. I could see his spirit being broken.”

First, Lipham handed out flyers in the car line at her son’s elementary school, and she spoke out at a school board meeting. Then, she formed an online petition that garnered thousands of signatures.

Now parents are creating similar online petitions around the state. More than 2200 people have signed a petition to make recess mandatory in Pinellas County, This fall, Parents in Osceola County also started a petition demanding recess. And a similar effort in Orange County last year led to a school board resolution recommending that schools provide the breaks.

And that’s the way change might happen, says Judy Stockman, who teaches at Sykes Elementary school in Lakeland — when parents get involved.

“Teachers have already voiced their opinions about this and nothing happened,” Stockman says.

The state does require every school to provide PE for 150 minutes a week. But Stockman, like the Superintendent and the parents at the meeting, say that’s not the same as recess.

“PE doesn’t count,” Stockman says. “That is structured. What I’m seeing lacking is time for social skills and social development. and that type of thing. Just to go and explore on your own.”

LeRoy said some school districts, like Orange county, have adopted Resolutions in favor of recess. But LeRoy said she wanted a policy for schools to follow.

The Polk County school board will take up the committee recommendations on recess at its Dec. 8th meeting.