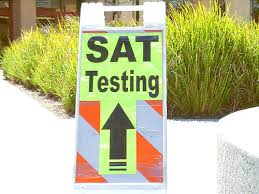 Like many parents of high school juniors, I’m getting anxious about upcoming college applications and what it’ll take to get in, such as doing well on the SAT. Adding to the uncertainty is the fact that the College Board, creator of the SAT,  is debuting a new test in March and these are the first changes in more than a decade.

But I’m not sure my son Daniel is worried about it enough!  He’s a student at Harrison School for the Arts in Lakeland, and he was doing homework in front of the television when I decided to speak to him about what he’s doing to prepare for the entrance exams.

His app is called “Daily Practice for the new SAT.”  It’s put out by the College Board, and a company called Khan Academy. The College Board has contracted with Khan Academy to provide SAT test preparation to anyone, online, free of charge. That’s something new, and it’s an attempt to level the playing field between families that can afford to hire expensive testing tutors — and those who can’t.

I’ve heard several counselors say the Khan Academy prep is very good. But wouldn’t face to face coaching be even better? I thought I needed to talk to a highly regarded testing tutor in St. Petersburg, and see what he said about the revamped SAT.

Richard Estren has been preparing students for these tests for around 25 years. Among the many postcards tacked on his wall, I saw a graduation announcement for Stanford, one of  several of his students that he said was admitted to that elite school.

One reason that the College Board is making changes to the SAT, said Estren and others I’ve talked to, is because the other college entrance test, the ACT, has been taking over the market share in the past few years. In response,the new SAT is taking its cue from the ACT in its changes, and becoming more aligned with what kids should be learning in class, including common core standards.

One of those big changes on the way is those esoteric SAT words, like “lachrymose” or  “raconteur,” going away in favor of more commonly used words. There’s no penalty for guessing now. Also, the essay is becoming optional.

Reading passages — not just math sections — will include charts and graphs to interpret.

“I’m guarded about the new SAT,” Estren said. “I think it will be harder for many students. It’s going a little more analytical in its approach. They’re raising the bar, they’re raising the bar. And that’s okay, I just don’t think a lot of students are quite ready for that yet.”

Estren said he’s advising kids to skip the March SAT and wait for later sittings,or just stick with the ACT. But he said the College Board did a “great thing” by providing free Khan Academy training to any students that want it.

The key, he said, is what he calls “P3.”  Practice, practice practice.

I asked my son Daniel about that. He said so far he’s just been trying to keep up with his schoolwork, sports and extra-curricular activities.

Me: “So you mean you feel like there’s not a lot of time to  study for these tests, is that what you’re saying?”
Daniel:  “I pay a lot of attention to my classes. So I guess I haven’t paid attention a lot to the SAT or ACT. I try not to be overwhelmed about it.”

Oh, well. Maybe Daniel is right not too stress over the tests so much. He’s a good student, and he’ll be fine. Estren said he has faith that most  students wind up where they belong. And anyway, at last count, almost 900 colleges are making the tests optional for admission.