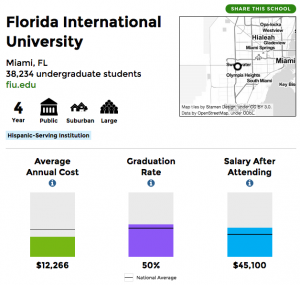 A snapshot of data for Florida International University.

Lots of schools promise to train students to be nurses, technicians or other in-demand medical careers. But a new federal database shows that isn’t always the case.

At some schools only a small percentage of students who attend using federal grants or loans earn more than a high school graduate a decade after enrolling in college.

The data links students who received federal financial aid to what they reporting earning on their tax forms a decade later.

Jacksonville’s Chamberlain College of Nursing and Orlando’s Adventist University of Health Sciences had the highest percentage of students earning more than a high school graduate — and some of the highest average earnings of any Florida college. 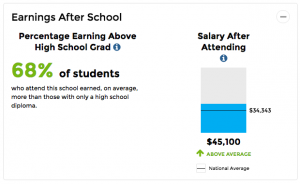 This graphic shows what percentage of students who took federal financial aid earned more than a high school graduate 10 years after enrolling in FIU.

And some schools focus on low-income students, students who have dropped out or others who have traditionally struggled in school. So using only earnings to compare schools may not be fair.

The database has also added lots of demographic data, so you can compare the student bodies at similar schools.

The new federal database is part of a broader effort to help students make more informed college decisions. The Department of Education planned Consumer Reports-style ratings for colleges, but abandoned the idea because of the complexity of the data.