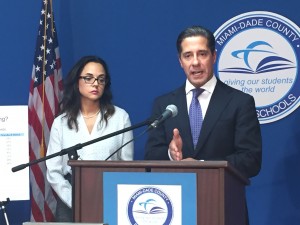 The superintendent of Florida’s largest district says an outside review of the state’s new test shows that Florida students weren’t being tested on what they were expected to know.

Miami-Dade Superintendent Alberto Carvalho says a review of the Florida Standards Assessments released today shows that on some exams as many as one in three questions weren’t testing Florida standards. That’s because Florida hired a contractor, the American Institutes for Research, which repackaged test questions originally written for a Utah exam.

Standards outline what students should know at the end of each grade.

Carvalho says that and other problems identified by an outside reviewer, Alpine Testing Solutions, are enough reason for the state to not issue A-to-F school grades this year. Carvalho was backed by the Florida Association of District School Superintendents. The group issued a press release saying it still had “serious concerns” about the Florida Standards Assessments.

“Now all Floridians can share my confidence of the assessment,” she said during a press conference.

This chart shows how well questions on six exams match up with Florida's standards, according to Alpine Testing Solutions.

Students in 3rd grade could be held back for low test scores and 10th graders must pass the exam in order to graduate high school.

Both Carvalho and the state superintendents association said this year’s test scores should not be used to calculate school grades or teacher evaluations, which help determine teacher pay.

This year’s school grades come with no consequences from the state, but Carvalho said grades still matter to the public. It’s not fair to put a grade on school performance when it’s unclear how dependable the test scores are.

Carvalho also noted that while Alpine Testing Solutions said a small percentage of students had trouble with the exam, those problems were not equally distributed throughout the state. Some districts were likely to have more problems — and therefore more questionable test results — than other districts.

In its report, Alpine Testing Solutions recommended the state phase out items designed for Utah students.

“While alignment to Florida standards was confirmed for the majority of items reviewed via the item review study,” the firm wrote in its report, “many were not confirmed, usually because these items focused on slightly different content within the same anchor standards. It would be more appropriate to phase out the items originally developed for use in Utah and replace them with items written to specifically target the Florida standards.”

The state has a three-year contract with AIR with three one-year options. The total contract is $220 million. Florida’s contract with AIR says that all test questions should be written specifically for the Florida Standards Assessments when students take the exam in 2016.

For the 2015 Florida Standards Assessments, the state leased items from an AIR test written for Utah. Florida Department of Education staff reviewed the questions to make sure they were appropriate for the Florida exam.