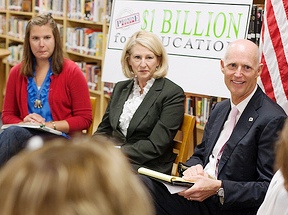 A review of Florida’s new statewide test has found the exam is valid and the results can be used to judge teacher and school performance, the Florida Department of Education announced.

But the review also found that after problems with computerized testing, “scores for some students will be suspect.” The reviewers recommend that state test scores are not the sole basis to determine whether students graduate or if they are placed in remedial courses.

Lawmakers ordered the review of the Florida Standards Assessments after testing problems this spring. School districts around the state reported students had problems logging into the exam and some students were kicked out while taking the test.

The state hired Alpine Testing Solutions to conduct the review.

“This is welcome news for all of us,” Education Commissioner Pam Stewart said of the results. “Now all Floridians can share my confidence of the assessment.”

Stewart said any disruptions to testing are unacceptable and the state department of education will work with the testing company, American Institutes for Research, and school districts to try and prevent future problems.

Legg said between 1 percent and 5 percent of test-takers’ scores were affected by technological problems.

“Above the range that is acceptable,” he said. But Legg said the review found the test valid in six of seven categories.

“I don’t think it puts into question the whole test,” he said.

The state’s largest teacher union, the Florida Education Association, jumped on a conclusion that Florida Standards Assessments results should not be the sole factor in determining whether students graduate high school or are placed in remedial courses.

“We agree w/ study – FSA shouldn’t be sole factor in deciding if students graduate,” the FEA tweeted. “DOE claims it isn’t, but it sure trumps everything else.”

And the National Center for Fair Testing called on the state to suspend the use of test results and seek a refund from AIR.

Third grade English language arts exam results are used to determine which students move to fourth grade. But those tests were taken with pencil and paper, and Alpine Testing Solutions said there were no problems with those results.

In addition, lawmakers granted school districts more flexibility in deciding which students move on and which students repeat third grade. Superintendents in some of Florida’s largest districts said they were less likely to retain students this year.

In high school, students must pass the 10th grade English language arts and Algebra I exams in order to graduate. Stewart said students who didn’t pass the exams this year will have other chances to retake the test, or use results from another approved exam.

The review also found that the majority of questions on the exam measured Florida standards. Much of the Florida Standards Assessments was adopted from a test designed for Utah. Some school leaders and parents were concerned questions designed for Utah students might be unfair for Florida students.

Florida’s contract with AIR says that all test questions should be written specifically for the Florida Standards Assessments when students take the exam in 2016.

Florida has a three-year contract with three one-year extensions with AIR for the exam. The total contract is worth $220 million.