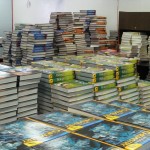 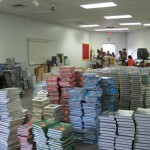 The Broward County Public School District instituted a new barcode system to keep better track of textbooks and make sure students return them after the school year. South Borward High’s textbook coordinator estimates the new system has saved the school up to $50,000 in unreturned textbooks. 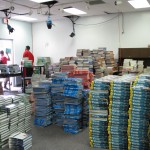 The video production equipment in the MTV classroom at South Broward High was replaced by stacks and stacks of textbooks after the video production program was cut last school year because of shrinking budgets. Some of the equipment, like the stage lights, were left behind. 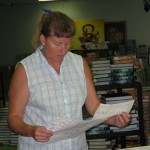 Debra Hixon has taught at South Broward High for the past 17 years as a marine science teacher. But before and after school, and during the lunch period, Hixon also works as the school textbook coordinator in order to earn extra income. Broward County teachers are the lowest paid teachers in the state. 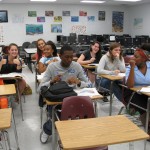 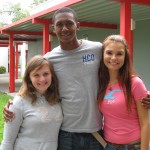 Taylor Drake, Kevius Morgan and Cristinne Paneit, seniors at South Broward High, say some teachers give them extra credit for bringing in items like markers, rulers, paper and tissues. All three say their final grades increased by a full letter in at least one class. “A lot of teachers do it,” Drake said, whose C grade increased to a B after she brought in classroom materials. “If they see that you’re trying and you’re still struggling and you bring in those items, it will boost you a lot.” Paneit says “its like a raise” for working hard in class. 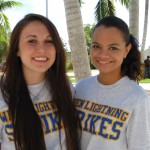 Kayla Kervin and Elinor Taieb are seniors at Cypress Bay High School in Weston, Fla. where 40 teachers were cut this school year. Taieb says, “some teachers actually request if you can bring some paper in for them because they are limited,” but she says students don’t get any credit for it.

Every school district in Florida is dealing with layoffs and budget cuts. But Broward County in South Florida is facing the largest budget deficit in the state—more than $140 million. And its forced teachers and students in the nation’s 6th largest school district to get creative about spending money.

Now the room is a maze of lime green, red and purple textbooks. Stacks and stacks of them. More than five feet high.

But the school’s textbook coordinator, Debra Hixon, has a method to the chaos.

“In the front is the math books, then it goes science after math and then social studies and then foreign language,” she said. “And English would be to the left side of the room. We have to leave a path for the computer carts to zoom by through here.”

There are no bookshelves because the county can’t afford them.

“Honestly there’s no point in spending money on bookcases when there’s not really a need to use them,” Hixon said.

This year the district eliminated the jobs of 1,400 teachers and about 1,000 other district employees.Though some have been re-hired.

That’s more than any other county in Florida.

And Broward teachers are now the lowest paid urban teachers in the state.

In the last three years, their salaries have been cut by 16%. Compare that to the 6% pay cut in the next worst district, Desoto County.

And with budgets for classroom supplies shrinking, underpaid Broward teachers are recruiting students to help stock their classrooms.

It’s nothing new for teachers to ask students to bring in school supplies. But South Broward High senior Kevius Morgan says his art teacher gave the class an irresistible incentive.

“The teacher was like, ‘Okay, I’m running out of paper towels and I don’t know how you’re going to dry your hands after you clean them, so if you bring in paper towels you get a letter grade up,” Morgan said.

His final grade increased by a full letter grade, he said.

“It saved me,” said Taylor Drake, a senior who was given the same option in her Algebra II class last year. “My final grade… increased from like C to B,” because she brought in markers, rulers and scrap paper.

The principal of the school, Alan Strauss, said he didn’t know this was going on. But he said it doesn’t surprise him.

“Because of the difficult budgetary times,” Strauss said. “But we don’t encourage it to be for extra credit because that could be seen as a socioeconomic advantage. So I’m not a big fan of that.”

Strauss says five years ago this wouldn’t even be brought up in the classroom.

The Broward school district is trying to rebound from a statewide Grand Jury report that blasted the School Board, calling it inept and corrupted by contractors and lobbyists.

“I’m hoping this year was our toughest year.”

If it were legally possible, the grand jurors said they would fire the entire board.

But the tumult at the top hasn’t hurt student performance—at least not yet.

Broward County is one of four finalists nationwide for the Broad Foundation Prize, which recognizes student achievement in large urban schools. The recognition is based on standardized test scores and demographic data, not just class grades.

What’s To Come In Other Districts?

“I think eventually, if these reductions continue, you know it’s hard to teach in a classroom with 65 students, or 30 kids, or whatever they turn out to be,” McMahan said. “I’m hoping this year was our toughest year.”

Other districts could have their toughest time next year.

The Broward County school district spent all its federal stimulus money last year, when other districts like Palm Beach and Miami-Dade held on to some.

But that stimulus money is likely to run out for them this year.