Republican Tom Corbett served as Pennsylvania’s 46th governor from 2011-2015. He lost his bid for reelection in 2014 to Democrat Tom Wolf.

Before his election in 2010, Corbett served two stints as Pennsylvania’s Attorney General. In 1995, Governor Tom Ridge appointed Corbett to serve out Ernie Preate’s term, after the Republican AG was convicted on corruption charges. Following Pennsylvania tradition, Corbett declined to seek full term in 1996.  He ran in 2004, though, winning a close race against Democrat Jim Eisenhower.

Corbett gained public attention in 2007 by launching an investigation into corruption at the state Capitol. Dubbed “Bonusgate,” the probe led to the arrest of six state representatives and 19 staffers. Four people, including former House Minority Whip Mike Veon, have been convicted, six have pleaded guilty, and two have been found “not guilty.”

Corbett ran for reelection in 2008, and won a decisive victory. He announced his campaign for governor in late 2009, and defeated Representative Sam Rohrer by a 38-point margin in the May 2010 Republican primary.

Corbett has lived most of his life in Shaler, Allegheny County. He’s married to Susan, and has two children: Tom and Katherine. Corbett graduated from Lebanon Valley College and St. Mary’s University School of Law in San Antonio. He served as United States Attorney for the Western District of Pennsylvania in the late 1980s and early 90s.

Despite building his reputation on fighting public corruption, StateImpact Pennsylvania uncovered two instances where Corbett failed to file ethics reports properly. In 2012 Corbett was six months late filing a required disclosure about a free vacation on a yacht he took from a friend and wealthy campaign donor. In 2013, he failed to disclose buying an out-of-state property in South Carolina.

Corbett flat-out opposed a severance tax – in fact he promised to forgo all tax increases throughout his tenure as governor. He did, however, support the “impact fee,” included in Act 13. Since the law was enacted in 2012, the impact fees have brought in an average of $210 million annually. 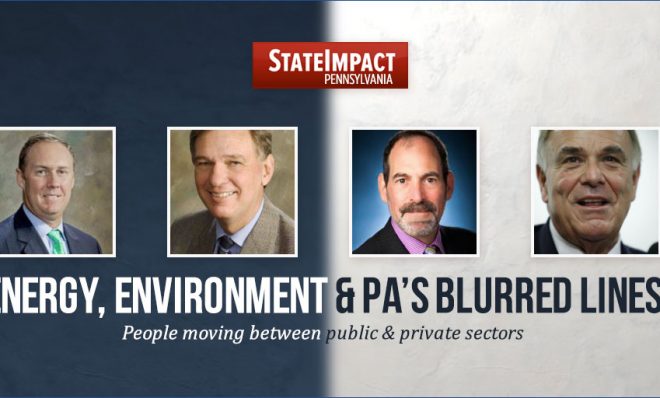 Where are they now? Track top state officials with Pennsylvania's Blurred Lines

What Wolf's win means for energy and the environment