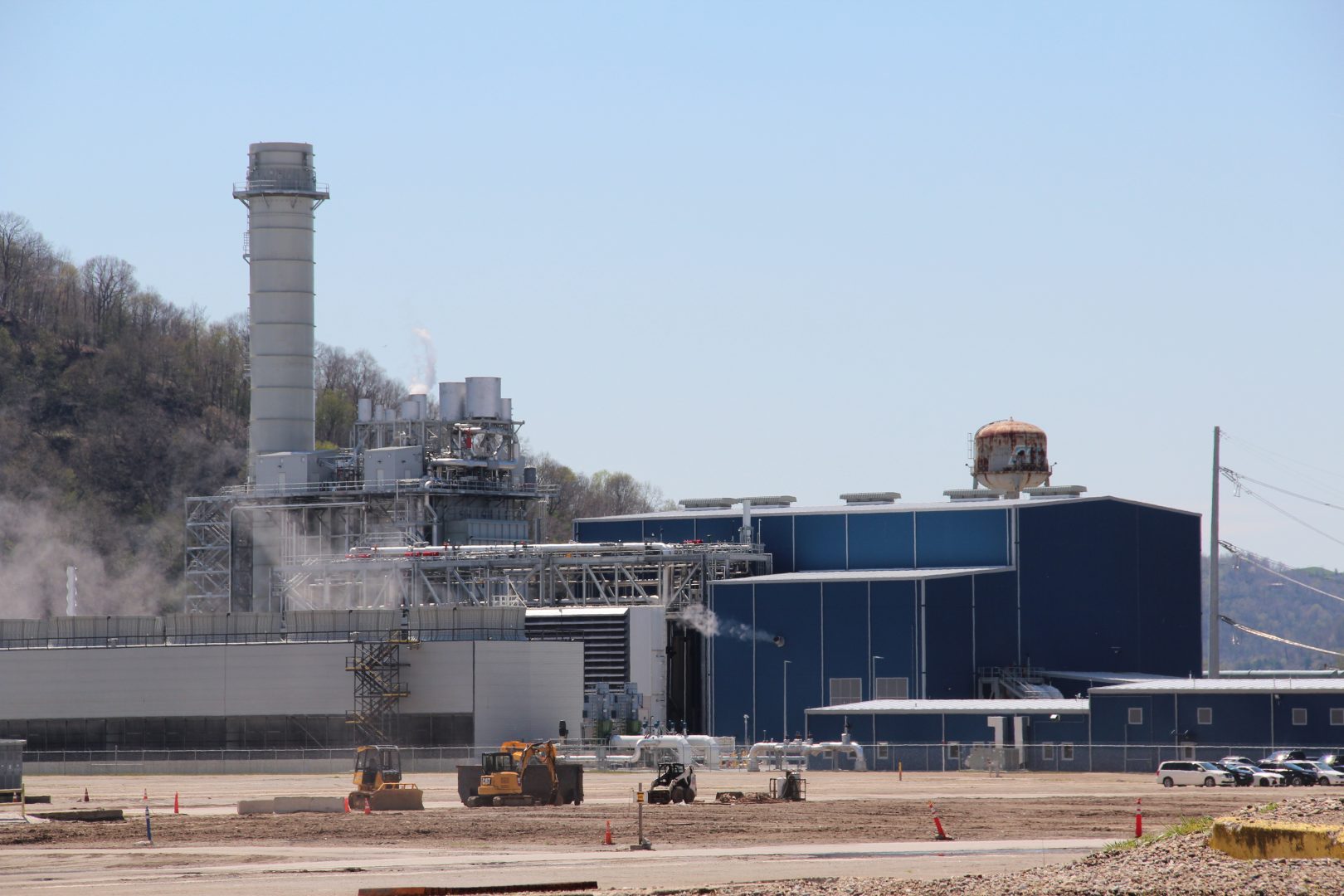 At an industrial site on the banks of the Ohio River, Vance Powers pointed to a brand new building – a big blue box with pipes coming in and out of it.

Inside the building is a 485-megawatt electric generator owned by Long Ridge Energy Generation. Since opening two years ago, Long Ridge has run the plant on natural gas from the nearby Marcellus and Utica shale region.

But a few weeks ago, it began an experiment that its owners hope is the start of new, cleaner way to power the economy – on hydrogen.

In March, the plant, in Hannibal, Ohio, started feeding its combustion turbine with a small percentage of hydrogen, trucked in from a nearby chemical plant.

“We think that what we’re doing here today is ahead of the curve,” said Powers, the company’s chief financial officer. The company says it’s the first of its kind to blend hydrogen with natural gas to make commercial power.

Powers says the company plans to use more hydrogen, but has been using small amounts of it as a test.

“Will the turbine burn it? We’ve just proved, yes, it will,” he said. “The next step is how do you get it in industrial-scale size and at an economical level?”

That is the ultimate question with hydrogen, the most common element in the universe. It’s been the subject of attention from scientists and policy makers for decades, because of its potential to replace fossil fuels. That’s because when it’s used to power a car or fuel a power plant, hydrogen creates no carbon dioxide – its chief byproduct is water. But getting a clean, cheap source of it has been hard to do.

That might be changing. Thanks to a combination of government support and pressure from investors, companies are trying to revive the dream of a hydrogen economy.

Bo Wholey, Long Ridge’s CEO, said the company started exploring ways to lower its plant’s carbon footprint a few years ago, in response to what customers want – electricity that doesn’t produce carbon dioxide, the key driver in climate change, which the UN has called a “threat to human wellbeing and (the) health of the planet”. Without deep and rapid cuts to carbon pollution, the UN recently reported, the earth could see catastrophic warming by the end of the century.

Wholey said he was hoping to lure a data center to this stretch of the Ohio-West Virginia border by the promise of low-carbon energy.

“We’re really responding to what the market wants,” Wholey said. On top of that, investors are starting to demand lower carbon footprints, he said. “I think any new power plant project is going to have to have some pathway to decarbonize. I don’t know that financing would be possible without that in today’s market.”

Most industrial hydrogen is made from natural gas, in a process called “steam methane reforming.” This method – known as “grey hydrogen,” creates CO2.

Long Ridge says it wants to capture that CO2 and store it underground, a method known as “blue” hydrogen.

Around the country, others are beating a path to hydrogen, which the federal government has been trying to support since the George W. Bush administration.

President Biden’s bipartisan infrastructure bill included $8 billion to create four “hydrogen hubs” around the country – where facilities create, store, and use hydrogen in industrial settings. A consortium of companies is hoping to land one in the Pennsylvania, West Virginia and southeast Ohio region. That has Wholey excited.

“This location here…is perfect for at least one of those hydrogen hubs,” he said. “That’s certainly something that we’re going to be evaluating, as we think about how to make running on hydrogen more economical.”

But power plants aren’t the only end users of hydrogen. It’s a climate-friendly solution for settings where batteries aren’t ideal – like in long-haul trucking, aviation, and heavy industries that need a lot of heat.

Van Dorsten says blue hydrogen isn’t a perfect climate solution – companies can only capture about 90 percent of the CO2 created when making hydrogen out of natural gas.

“It won’t ever be zero,” she said. “The whole idea with carbon capture and storage is you’re not sequestering 100% of the carbon dioxide that gets emitted.”

There is a way to make hydrogen with zero emissions – green hydrogen. That’s when renewable energy is used to split hydrogen atoms out of water. At least one of the hubs funded by the infrastructure bill will use green hydrogen. Several green hydrogen projects have been announced in Utah, California, and Texas.

But in a country like the U.S. — whose politics are influenced by the world’s largest oil and gas industry — blue hydrogen might be the easiest path to getting carbon reductions, she says.

“Do you think that a natural gas industry would be more amenable to (being told), ‘Hey, we’re going to totally get rid of all of your infrastructure and replace it with hydrogen?” van Dorsten said.

“Or do you think that they would prefer, ‘Hey, you know what, that investment that you made in all of that infrastructure, you can keep it.  You’ve just got to pay more to add carbon capture on to it.’ Because I think they’d be interested in the latter. It’s just a matter of the money and the power of these companies. I think in the U.S., blue hydrogen will likely be more successful.”

Van Dorsten says climate policies – like a carbon tax in Europe – are driving interest by companies and investors into hydrogen.

In the U.S., a hydrogen tax credit was part of several climate policies in last year’s failed Build Back Better Bill. That legislation was shot down by West Virginia Sen. Joe Manchin. But Manchin has voiced support for hydrogen, especially hydrogen made from fossil fuels – and he’s hoping one of the hubs is built in West Virginia.

“There is an immense question going forward, not just in Congress, but especially in the private sector, of where is that money going to come from?” O’Leary said. 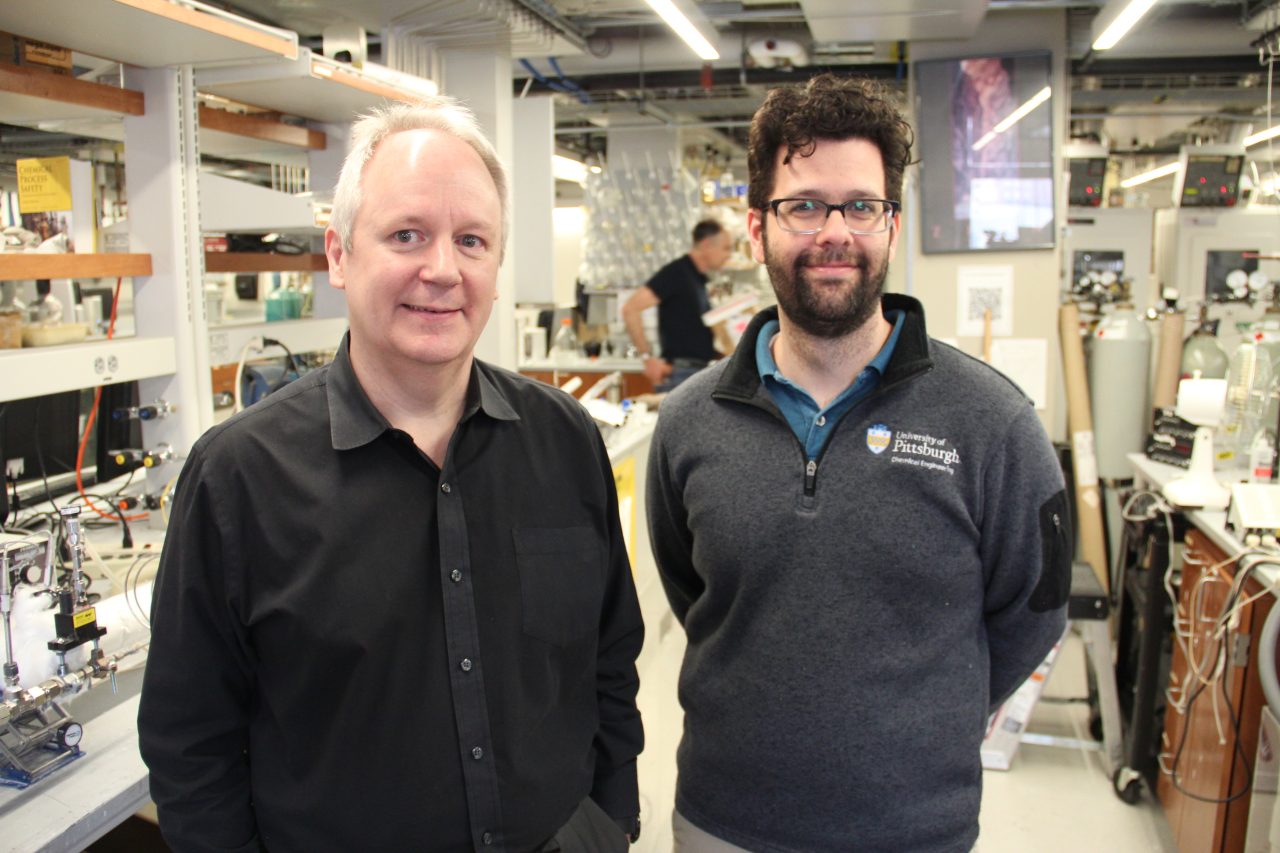 Götz Veser and James McKone at their lab at the University of Pittsburgh, where the two scientists research hydrogen related projects.

But some scientists say in the near future, using fossil fuels to make hydrogen makes sense.

“Generating hydrogen from natural gas can actually be quite efficient,” said Götz Veser, Nickolas A. DeCecco Professor of Chemical Engineering at the University of Pittsburgh. “Over the next 10 or 20 years, making hydrogen in an efficient way from fossil resources might be the way to reduce (our) carbon footprint faster and lower than with renewable technologies.”

For the time being, he says hydrogen from fossil fuels is more cost-efficient than green hydrogen because it relies on technology that’s been around for almost a century.

Veser and his graduate students are working on several hydrogen-related projects. At his lab in Pittsburgh, he shows off a small “reactor” — a container with several tubes feeding into it. Inside the container is a small blob of molten metal.

By running natural gas through the blob, Veser’s lab is converting methane – the main component of natural gas – into hydrogen. But instead of producing carbon dioxide, this process produces a solid version of carbon. The carbon doesn’t go into the atmosphere, and disposing of it is relatively painless – no pipelines necessary.

“If you really want to remove that carbon, you can literally just dump it anywhere. Carbon is completely benign,” Veser says.

The current surge in interest in hydrogen is striking, says Veser’s colleague at Pitt, chemical engineer James McKone. McKone works on using hydrogen as a way to reduce CO2 from petrochemicals, aviation fuel, and fertilizers.

“We’re getting calls from businesses and others who are like, ‘We want to talk about this hydrogen stuff.’ And I’m sort of like, ‘I’ve been doing this for 15 years. Where have you all been?’”

In the long term, McKone sees a future where electricity from solar and wind creates a steady stream of hydrogen.

“Hydrogen on some level is going to be needed. You need a lot of it, into the indefinite future,” McKone says.

If that hydrogen future comes – and where it comes from – depends a lot on decisions made right now.