Philadelphia, seen from the Allegheny SEPTA station in Kensington. 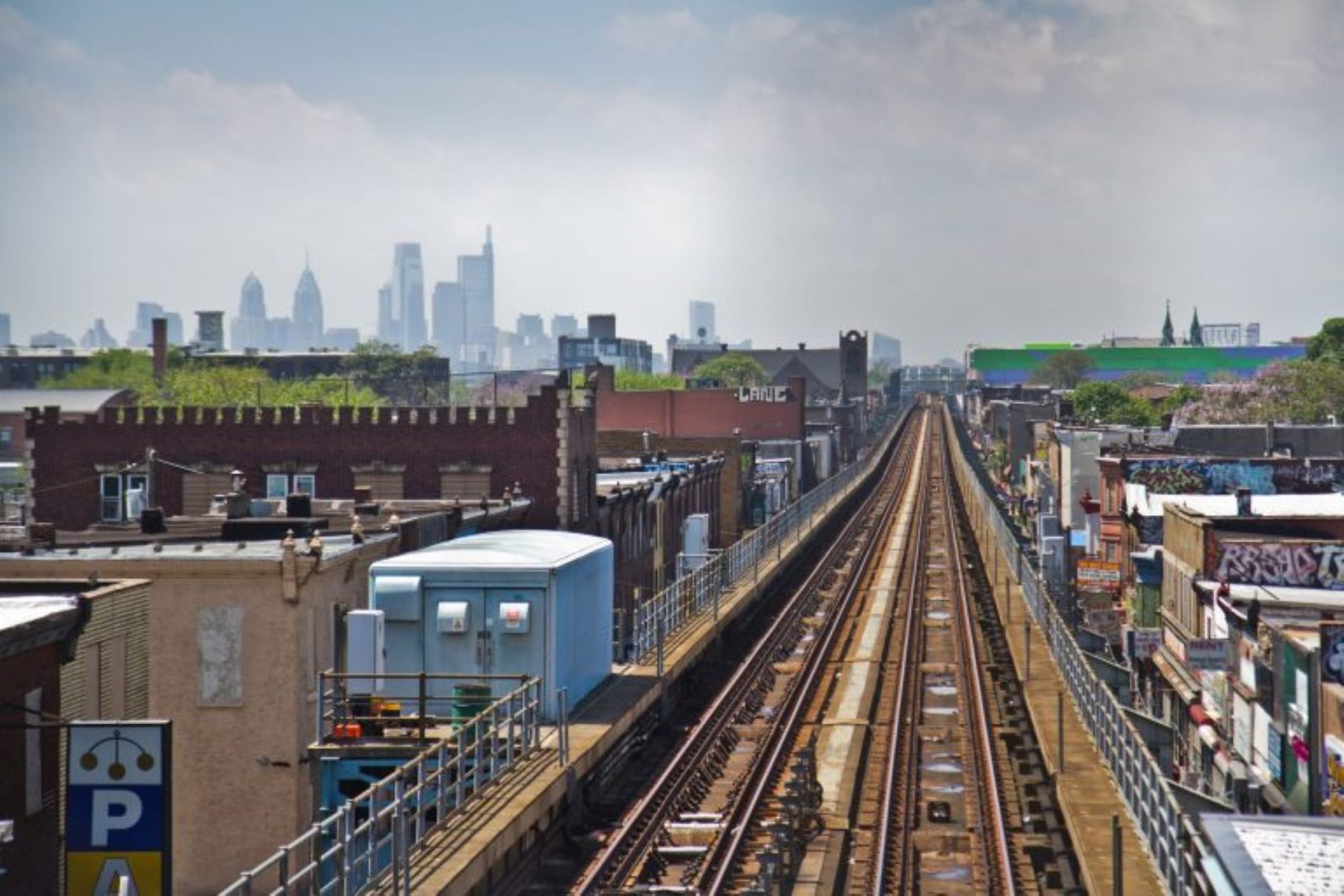 Philadelphia, seen from the Allegheny SEPTA station in Kensington.

Planet-warming pollution is going down in Philadelphia. A new report shows citywide emissions have dropped 20% since 2006 — significant progress, but still a long way from net-zero, where the city has promised to be by the year 2050.

“We’re certainly on track,” said Christine Knapp, director of the city’s Office of Sustainability. “We’re a fifth of the way there, but we have less than 30 years to get there.”

The city-wide greenhouse gas emissions inventory released last week compares emissions from 2019, the most recent pre-pandemic data, to a baseline in 2006. It includes pollution from fossil fuels burned in the city, as well as emissions created to produce the electricity Philadelphians use.

The city has committed to zeroing out its emissions by 2050, something experts say the world needs to do in order to avoid some of the worst impacts of climate change. But average worldwide emissions in the past decade have been the highest in human history, putting us on track to overshoot 1.5 degrees Celsius of global warming — beyond which the world will see increasingly disastrous floods, storms, and heatwaves affecting millions of people.

Experts say the next few years are critical for reducing global emissions. Philly’s latest inventory suggests the city met its interim goal of a 10% reduction from 2006 levels by 2020, and is on its way to meeting its next goal of 25% reduction by 2025.

But much of the city’s progress seems to be the result of broader trends, rather than city policy, as the regional electricity grid shifts away from coal and toward cheaper, less carbon-intensive natural gas.

To push emissions down to net zero, the new report says the city will need to expand existing sustainability programs and implement new ones.

“We’re going to have to go faster and do more,” Knapp said.

Reductions from a cleaner grid

Back in 2006, the year the city uses as its carbon emissions baseline, coal was the single largest source of power for the grid that supplies Philly’s electricity. By 2019, the leading power source was natural gas. Nuclear energy, which is carbon-free, has consistently come in second. But renewable energy sources — like wind, solar, and geothermal energy — are still negligible contributors to the grid.

“We don’t control the grid,” Knapp said. “But we can help support the grid getting cleaner through our own actions.”

These include power purchase agreements, which the city has used to secure solar power for its municipal buildings, city rebate programs to help families and businesses install solar panels, and advocacy through the PJM Cities and Communities Coalition — a group of municipalities in the regional grid with clean energy goals.

Pennsylvania recently adopted a carbon-pricing policy expected to lower emissions from power plants (although coal interests have sued to block it). The city threw its support behind the governor’s effort, too, Knapp said.

“They are tools that we’ve been trying to implement prior to 2019, but I think we’ll see more of the impact in the coming years,” she said.

Buildings are more efficient, but still relying on gas

Most of the city’s greenhouse gas emissions come from buildings and industry.

The effect of a cleaner grid was clear in the emissions from this sector, which went down 31% between 2006 and 2019. The reductions were spread across residential and commercial buildings, as well as industrial operations.

This drop in building emissions came despite several factors pushing in the opposite direction: an increase in population, more people working in the city, and more heating and cooling days in 2019 than in 2006.

City officials say the reductions were mostly thanks to electricity grid shifts, but energy efficiency improvements for buildings and appliances also played a role. Officials say a program requiring Philly’s largest buildings to report energy use to the city likely contributed.

“We saw an overall 1% decline in electricity use, but a corresponding 40% decline in emissions,” said Nidhi Krishen, senior manager for climate mitigation in the city’s Office of Sustainability.  “That tells us that the grid is driving a lot of that change.”

But for residential buildings, the biggest source of carbon emissions was not electricity — it was natural gas, used for heating and cooking.

Across all buildings and industry, emissions from natural gas grew 4% between 2006 and 2019.

Philadelphia Gas Works, the largest municipally-owned gas utility in the country, has agreed to explore ways to reduce its carbon footprint. A study released late last year recommended the company explore several potential paths forward, including providing geothermal energy or harvesting landfill gas. But many have questioned PGW’s commitment to changing its carbon-intensive business model, after PGW executives helped draft legislation that could tie the city’s hands when it comes to electrification.

Waste and wastewater contribute a small fraction of the city’s overall greenhouse gas emissions — but saw a significant decline between 2006 and 2019.

“I think that’s a really good sign,” Krishen said. “We’re proud of that.”

The new emissions inventory is the first to show the impact of the PES refinery closure in 2019, after a massive explosion and fire. While operating, the South Philly refinery was the largest single source of carbon emissions in the city, and the new inventory shows that in 2019, despite operating only half the year, the refinery contributed 7% of the city’s emissions. Its closure lowered emissions by the equivalent of roughly 300,000 gas-powered cars driven for a year.

“Did we just push those emissions somewhere else?” she said. “Someone’s still making that product.”

More pollution from cars and planes

Transportation emissions are going in the wrong direction.

In 2019, transportation emissions were 5% higher than in 2006, an increase driven by more people driving and flying. Meanwhile, passenger rail emissions from SEPTA and Amtrak went down, because electricity got cleaner.

Cars and trucks in Philadelphia traveled more miles in 2019 than in 2006. City officials attribute this to the city’s increase in population, as well as to the rise of ride-share services like Uber and Lyft, which some people take instead of transit.

But even the emissions from Philly’s cars, trucks and buses combined are not as high as those from aviation.

The city’s 2019 inventory includes slightly older data from the Philadelphia International Airport, and shows a 3% increase in airport emissions since 2006, driven by an increase in travelers and cargo.

Philadelphia lost 6% of its tree canopy between 2008 and 2018, largely in residential areas. This means the city has fewer trees to absorb carbon dioxide, and offset the city’s emissions.

For the first time, the city’s emissions inventory counted the impact of trees — and the results were disappointing.

In 2019, Philly’s trees sequestered just half the carbon emissions they did in 2006. Even then, trees only absorbed enough to offset small categories of emissions, like marine transportation — and didn’t make a dent in categories like cars or buildings.

The city has a plan to increase tree cover in the city to nearly a third of city land — prioritizing areas with higher levels of poverty, poorer air quality, poorer mental and respiratory health, and more exposure to heat.

“The Philly Tree Plan, oriented around trying to regrow and protect the existing [trees], would then also be a great service of helping us meet [emissions] goals as well,” Knapp said.

The path to net-zero

To eliminate Philadelphia’s greenhouse gas emissions, huge transformations are needed — of everything from the regional electricity grid, to how we travel to work, to the way we heat our homes.

Existing strategies outlined in the city’s Climate Action Playbook last year fall short of getting the city to carbon-neutral.

If the city’s population continues to grow and summers keep getting hotter, requiring more air conditioning, reducing emissions will get even harder.

“That plays a role that we have to account for,” Krishen said.

“We are making progress,” Knapp said. “But we do have a lot further that we’re going to have to go.”