Aerial views of pipe being laid at a Mariner East construction site in Delaware County. The company says construction is complete but residents say this work is not remediation but construction. 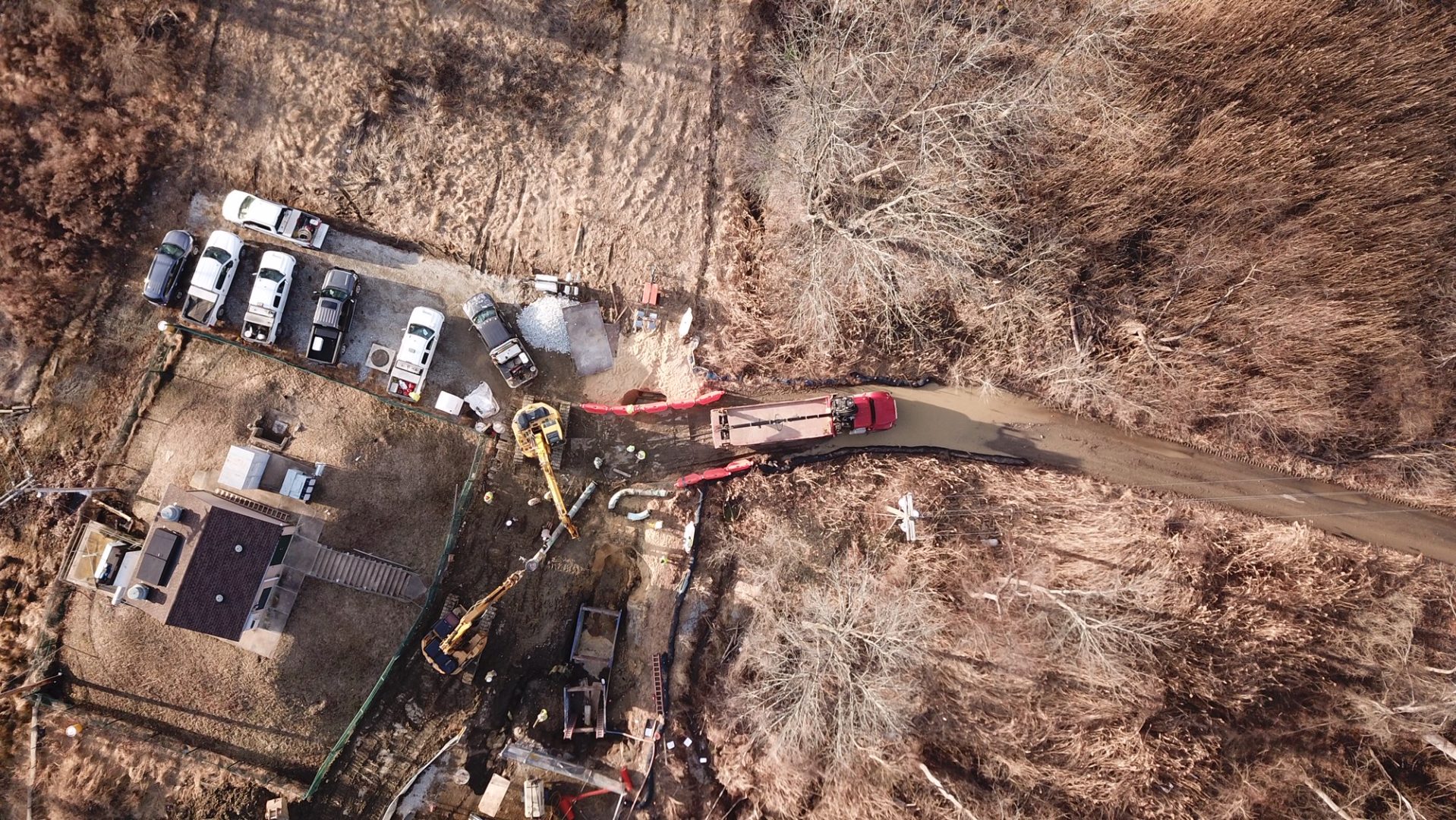 Aerial views of pipe being laid at a Mariner East construction site in Delaware County. The company says construction is complete but residents say this work is not remediation but construction.

The company announced the pipeline’s completion to shareholders in its February quarterly earnings call as well as its March investor presentation. A spokesperson for Energy Transfer said this week that any additional work is not “construction.”

“As we said on our most recent earnings call, construction of the final phase of the Mariner East project was completed in February and commissioning is in progress,” said Energy Transfer’s Lisa Coleman. “There are other activities underway, such as restoration and remediation.”

But some living near the pipeline, who don’t trust the company in part because of its track record of construction-related permit violations, aren’t buying it. Edgmont resident Lora Snyder said she watched this past week as a section of pipe was removed and replaced by another; she documented it with drone footage. To her, that’s construction.

“It’s an ongoing lack of transparency to the community and their own investors,” she said. “It’s not restoration.”

Snyder has documented pipeline construction in Delaware and Chester counties with photos and drone footage. She said the stretch in question had issues from the time the pipe was laid, when drilling in 2017 led to “frac-outs.” Those occur when attempts to drill into the bedrock hit more porous geology instead and subsurface water and fluid used in the process rise to the surface and cause flooding.

The pipeline project was delayed by multiple construction mishaps across its entire length, including this section. Energy Transfer then created a workaround to ship the natural gas liquids to Marcus Hook by repurposing decades-old gasoline pipelines. Mariner East opponents like Snyder dubbed this the “Frankenpipe.” She worries about safety issues, especially with regard to the older pipe, and that “[Energy Transfer] is saying, ‘We’re staying with the Frankenpipe and no one will know.’”

Work at a Mariner East site in Delaware County where residents say construction of new pipe continues despite the company assurances it is complete.

Sunoco began construction on the pipeline five years ago, and the project was at least two years behind the initial planned completion date.

Sunoco was bought by Texas-based Energy Transfer, which is now facing 48 criminal charges over the construction of the pipeline. In addition, the Department of Environmental Protection has issued more than 120 notices of violations to Energy Transfer, which has paid more than $20 million in fines and assessments since construction began in February 2017. The state Public Utility Commission temporarily shut down the operation of the Mariner East 1 pipeline in 2018 over safety concerns.

The bulk of the product that flows through the line, including ethane, propane and butane, will be shipped to Scotland to make plastics.

A spokesperson for the DEP said the permits issued to Energy Transfer cover both construction and remediation or restoration. Those general permits have been extended by DEP pending examination of the company’s new permit applications.

“If the work is within the ‘Limits of Disturbance’ and the appropriate controls are in place, DEP wouldn’t necessarily be notified or involved,” said the DEP’s Virginia Nurk.

The PUC directed questions about the site and operations back to Energy Transfer.

“PUC Safety Division engineers are in the field daily as part of their inspection and oversight of pipeline operations and observation of pipeline activities,” said PUC spokesperson Nils Hagen-Frederiksen.

Clean Air Council attorney Alex Bomstein said the work looks to be both construction and restoration.

“Restoration shouldn’t involve moving pipe,” Bomstein said. “It’s very confusing to people when they say they’re done, but clearly they are still working on the pipeline.”