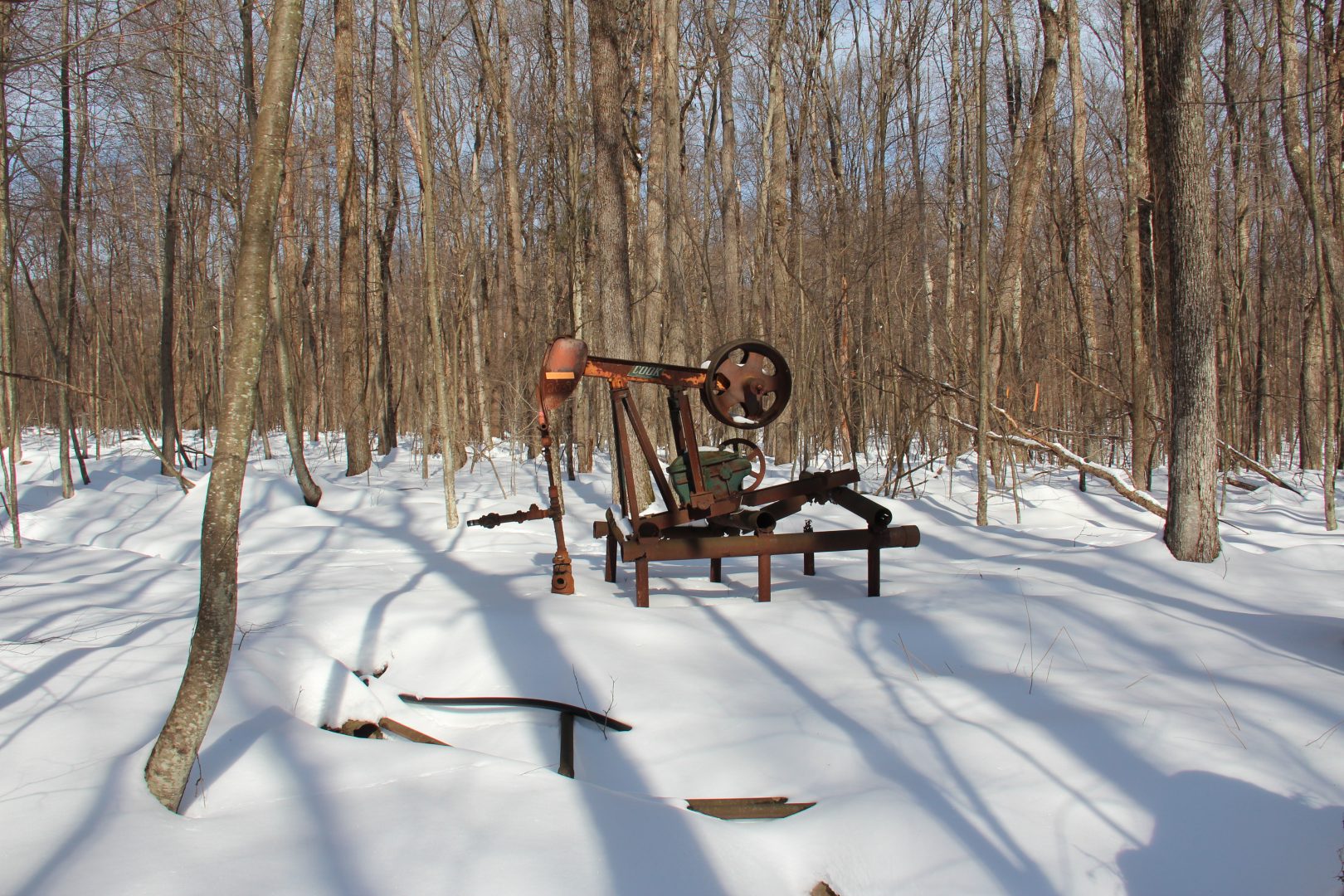 Don Cornell stood in a foot and a half of snow last week in Cornplanter State Forest and pointed through the trees at an old pump jack – the classic see-saw structure used to draw oil out of an underground well.

“You can see the jack is rusted apart,” said Cornell, an oil and gas inspector for Pennsylvania’s Department of Environmental Protection.

He noted several metal supports that are succumbing to the ravages of time. A two-inch-wide pipe the jack is resting on has started to sag to one side; the whole structure looks like it could fall over.

“Over in the next couple of years, that’s going to break apart,” he said. “Things are going to fall down…and this is going to go up in price a lot to take care of this problem.”

This oil well in Cornplanter State Forest in Forest County was drilled in the 1970s, state records show, but was abandoned decades ago when the company that owned it went bankrupt. That means it’s now Cornell’s problem. 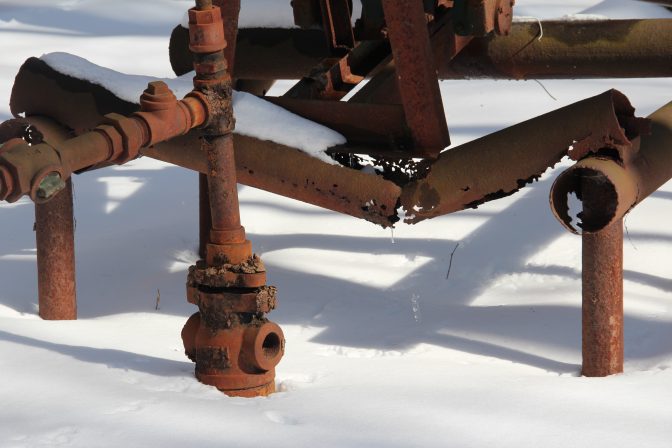 Companies are supposed to plug wells when they stop producing. But historically, many companies have walked away when they dissolve or go bankrupt, and the state has had few tools to stop them.

Now, the wells are basically open holes in the ground – and pose a number of problems. They can leak gas into people’s homes that can lead to explosions. They can pollute surrounding groundwater. And they can leak stray oil, brine or methane, a greenhouse gas that is 72 times as potent as carbon dioxide at trapping heat over a 20-year period.

The EPA estimates the nation’s 2 million abandoned wells are the No. 10 source of methane, after sources like agriculture, oil and gas drilling, and landfills.

President Biden’s bipartisan infrastructure law includes $4.7 billion dollars for plugging wells – basically, sealing them with cement. Pennsylvania is slated to get $330 million of that money over the next decade. 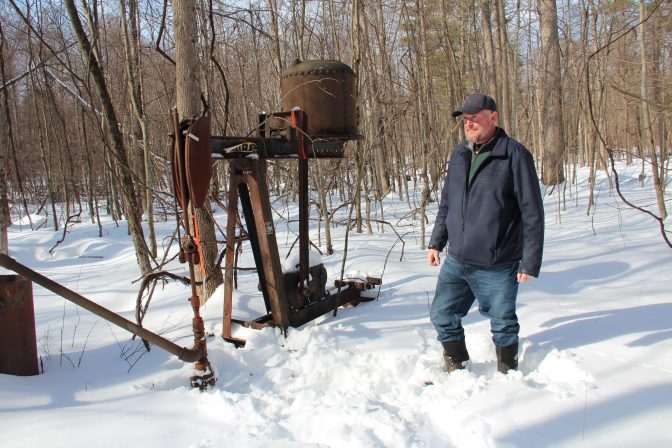 Perhaps nowhere is that money more needed than in this Northwestern corner of Pennsylvania, said Cecile Stelter. She is a state forester with the Department of Conservation and Natural Resources in Forest County.

“I oftentimes say you can’t swing a stick without hitting something metal out here,” Stelter said.

The state can’t even lease the lumber in this part of Cornplanter State Forest to loggers because of the number of abandoned oil wells there.

“There can be metal in the trees themselves that the tree has grown over, and then that becomes a safety issue for anyone in the manufacturing of that tree as it gets finished,” Stelter said.

At one time, this corner of Pennsylvania was the largest oilfield in the world. The country’s first commercial oil well was drilled here in 1859. 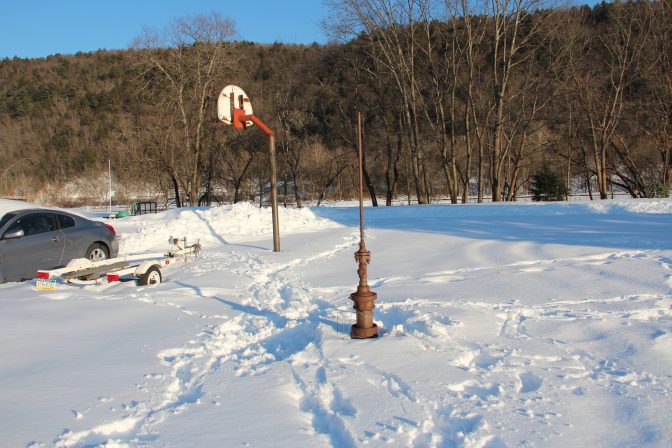 The legacy of all this drilling is visible in places like Pam Sneeringer’s backyard. She and her husband have spent years clearing their property along the Allegheny River in nearby West Hickory. But they couldn’t clear out one old well – it’s basically a rusty pipe sticking out of the ground about 6 feet into the air.

“You could smell it,” she said. “Anything I planted, it was dying and I couldn’t understand why.”

Sneeringer would like the state to plug the well, because it’s too expensive for her to do it on her own. In the meantime, she’s stuffed it with insulation, which seems to have helped.

“Now and then you can catch a whiff, but it’s not as bad as it used to be. And some things do grow now around there,” she said.

The problem for people like Sneeringer is there are more than 20,000 abandoned wells like this one that the state knows about – and 200,000 or more that it doesn’t. 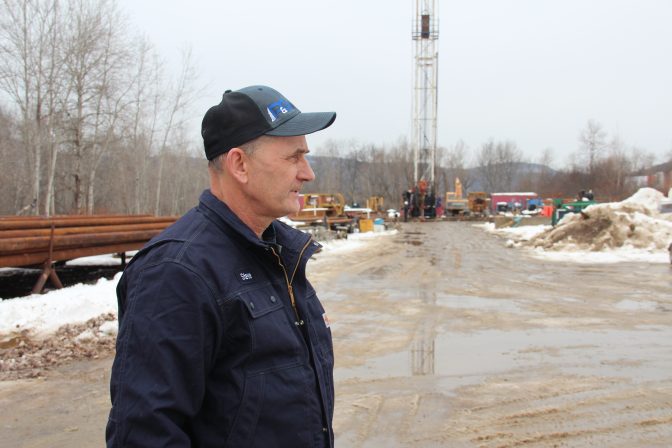 That’s in part because until the 1950s, companies didn’t have to tell the state where they were drilling. And it wasn’t ’til the 1980s that companies that wanted to drill new wells were required to take out bonds, which are basically insurance policies for environmental cleanup.

The infrastructure money could help clear up the backlog. The $300 million-plus the state could get over the next decade would put a serious dent in the state’s abandoned well problem, which the DEP estimates will cost $1.8 billion to clean up.

It should also make it a good time to be in the well-plugging business.

Steven Plants is president of Plants & Goodwin, an oil and gas company in Bradford, Pennsylvania. At his company’s yard, he showed off his newest piece of equipment, which he hopes to use on state contracts paid for with infrastructure money.

“This is our newest service rig,” he said, pointing to a multi-axle truck with a collapsible derrick on its bed. “It is a 112-foot-high derrick, and it will pull three hundred thousand pounds.”
Its cost? “A million dollars.” 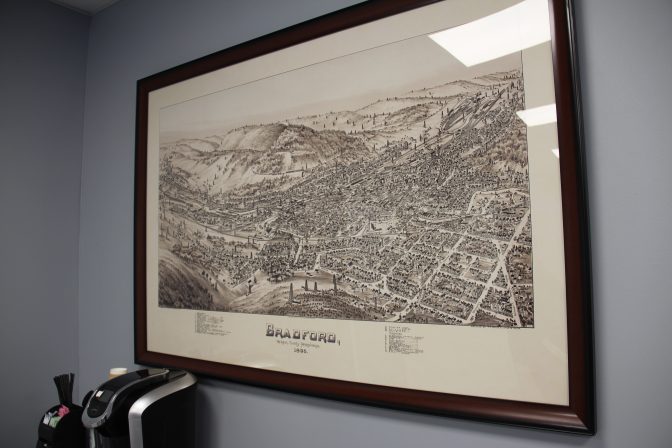 A framed image at Plants & Goodwin shows the oil drilling history of Bradford, Pa., at one time the world’s most productive oilfield.

All around Plants’ yard are big trucks, storage tanks, and scores of oilfield tools involved in the intricate job of clearing out and cementing oil and gas wells. The first thing his crews have to do is fish out any debris – old pieces of wood, animal skeletons, even medical syringes at one particular well. “Buckets-full,” he said.

The company then cements the well to keep any oil and gas in the rocks from seeping out.

Until now, well plugging has been a sleepy part of the industry. The state plugs only about 100 wells a year. And Plants says many companies – though required to plug their wells – haven’t set aside much money to do so.

“If you were a company and you owned wells, you don’t want to plug wells because there’s no money in it,” he said. “It’s cost, it’s an expense, and there’s never going to be any return on that investment.”

The infrastructure money may not solve that basic problem.

Melissa Ostroff of Earthworks worries current rules still make it too easy for companies to walk away should the industry face a downturn. Companies in the state only need to have bonding set aside of $2,500 for shallow “conventional” wells and $10,000 for shale gas, or “unconventional” wells. That’s far below the state’s current estimate of $68,000 for plugging one well. Her group is asking the state to raise those requirements.

“Companies are allowed to go out there and drill new wells, even though you might easily be able to take a look at the books and recognize that there’s no way they’re going to have the funding to close off all of these wells, and we’re just continuing to allow that to happen right now,” Ostroff said.

Oil and gas companies are challenging this effort, saying that it’s not needed for newer, more profitable shale wells, and that raising the requirements on smaller “conventional” oil and gas companies could put some out of business. In November, the DEP’s Environmental Quality Board voted to study the issue.

Still, Ostroff said she’s glad the infrastructure money will help plug these climate-warming gas leaks, even if it only covers a fraction of the abandoned wells in the state.