Mahitha Ramachandran at the climate strike on September 24, 2021, in Pittsburgh. 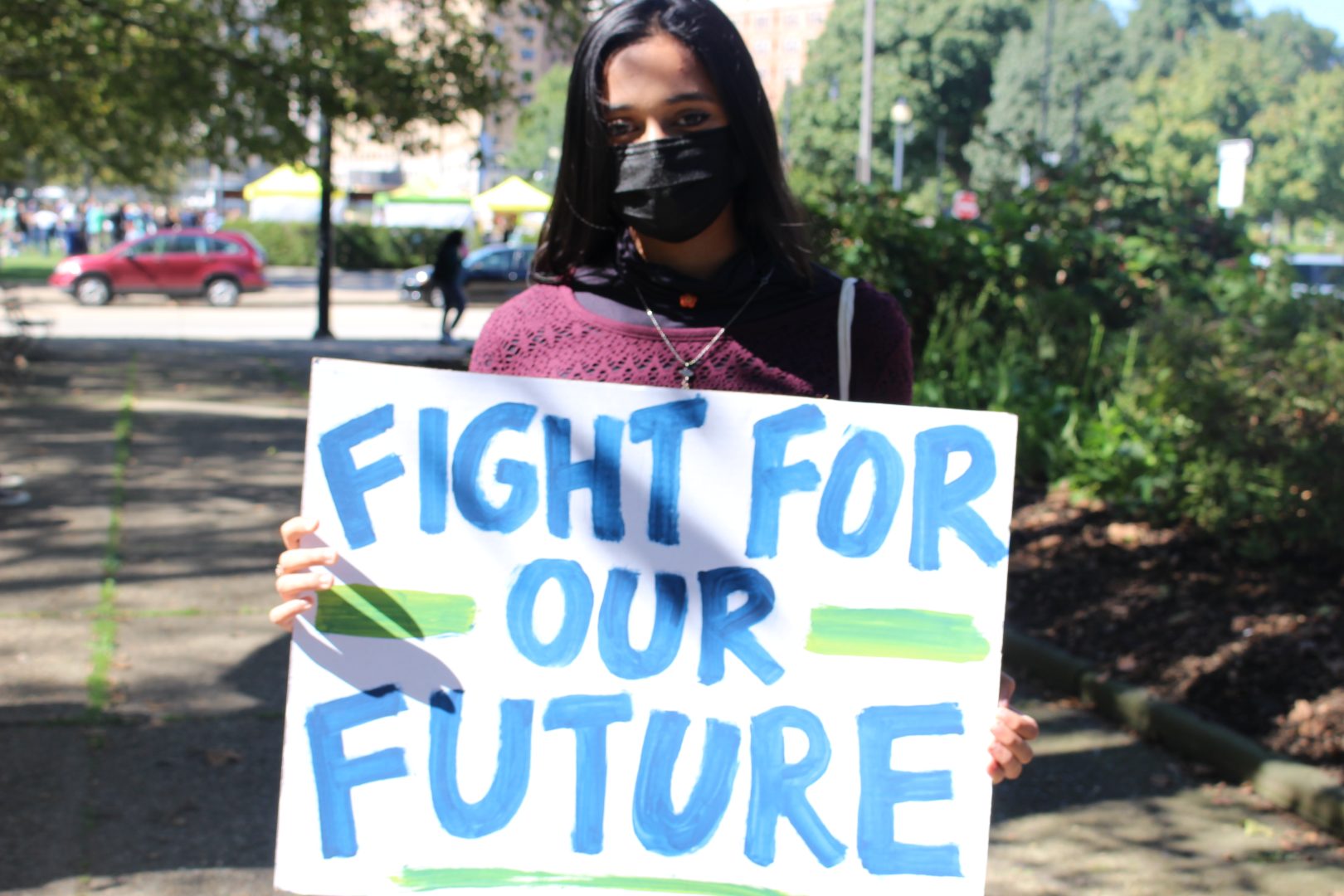 Mahitha Ramachandran at the climate strike on September 24, 2021, in Pittsburgh.

This story is part of a collaboration between Environmental Health News and The Allegheny Front for a series called “Pollution’s mental toll: How air, water and climate change shape our mental health,” with funds from the Pittsburgh Media Partnership.

In September, she was on her way to a student climate strike in Pittsburgh, along with about 150 other young people chanting and carrying signs. Hers read, “Fight for our Future.”

Sometimes it feels to her like there’s a natural disaster, like a storm or wildfire, nearly every day. “You’re constantly being, like, berated with this kind of news that it just feels so urgent and so necessary to learn about it and to know what’s going on,” she said.

Ramachandran remembers when she first started looking online about climate change in middle school. She felt panic but didn’t know how to talk about it.

Climate anxiety increasing in the U.S.

A recent survey published of 10,000 young people, age 16-25, worldwide found that 59-percent are very or extremely worried about climate change.

Dr. Claire Cohen often hears these kinds of concerns from young people. She’s a psychiatrist at Southwood Psychiatric Hospital for children and adolescents in suburban Pittsburgh and raised six kids herself. She hears from young people in her office and at home. 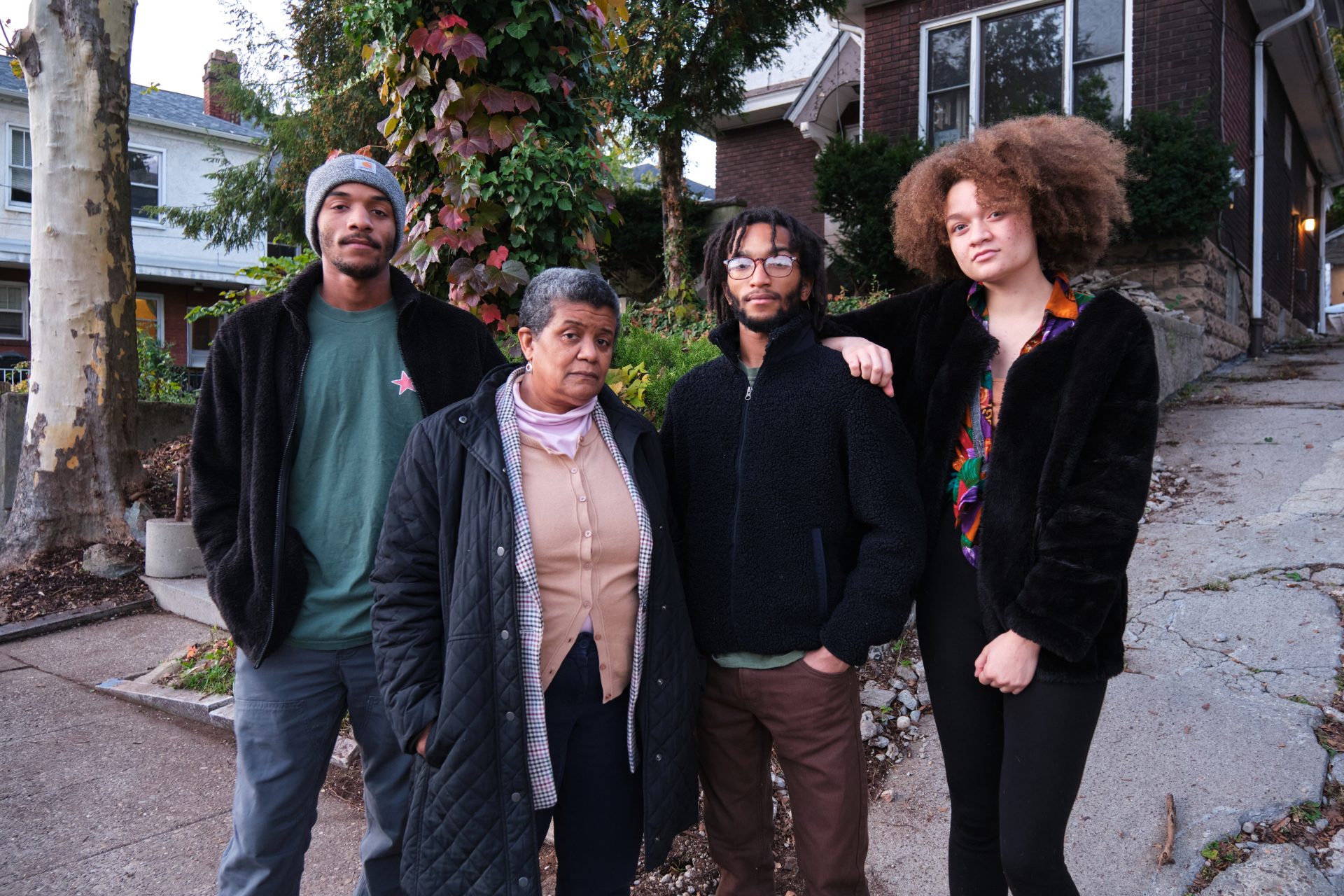 Dr. Claire Cohen, in front of her Pittsburgh home, with three of her late sister’s six children, whom she raised.

Cohen has been a psychiatrist for more than 40 years, but she didn’t understand that climate change could impact mental health until after Hurricane Katrina, in 2005, when a boy came into her office with his mother. They had relocated to Pittsburgh after surviving the disastrous storm in Louisiana.

“They had lost everything and they almost lost their lives and they were temporarily separated because of that whole big flood,” she remembered.

Profound traumatic events like this can impact how a child’s brain develops. It can give kids more trouble with learning and memory, and make it more difficult to modulate emotions.

“You see a lot of these kids, like my little patient with Katrina, will develop ADHD symptoms. They’ll have problems with emotional outbursts,” she said. “So I began to realize it’s not just interpersonal violence that can cause those kinds of traumas. It’s the climate, too. And if we don’t address this, we’re going to have more kids with trauma.”

Adults are increasingly worried about climate change too, according to Susan Clayton, the Whitmore-Williams Professor of Psychology at the College of Wooster in Ohio. “Particularly in the last couple of years, we just hear more and more people who are worried, who are worried at this very profound level,” she said.

Clayton is the lead author of a new report for the American Psychological Association and ecoAmerica on climate change and mental health.

She’s been researching whether climate anxiety is clinically significant, as a threat to mental health.

In her work, surveys of nearly 400 adults asked about how climate change was affecting them. It asked whether thinking about climate change made it difficult for respondents to concentrate, sleep, work or socialize.

“15… 20… 25% of the people we surveyed said that at least some of the time they had trouble concentrating because they were thinking about climate change or they had nightmares or they were crying or other impacts that I think suggest that climate anxiety is beginning to have an impact on our lives,” Clayton said.

A poll last year by the American Psychiatric Association found that more than two-thirds of Americans are somewhat or extremely anxious about the impact of climate change on the planet, and more than half are anxious about its impact on their own mental health.

Dr. Elizabeth Haase is the Medical Director of Psychiatry for Carson Tahoe Hospital and Behavioral Health Services in Nevada and chair of the association’s climate change committee. “What I’m seeing most is grief,” she said, “like the people that actually talk to me about climate change, it’s because of the losses that they are seeing around them.”

Haase hears grief about the loss of animals, and about the destruction of the natural environment. Some adults get triggered at the mention of apocalyptic change. While others display symptoms of continuous traumatic stress.

“Which is the model that we use to understand children who are in chronically abusive or neglectful situations,” Haase explained. “It puts a kind of low-grade strain on their stress system to know that people are not going to respond to them, that people are going to mistreat them and there’s nothing they can do about it. I think a lot of people are essentially feeling that as we watch our leadership fail us so completely.”

A call to action for mental health experts

Mental health research has been slow to study the psychological effects of climate change, Haase said.

Still, there’s plenty of research on how the impacts of climate change affect people. For example, air pollution and heat. “As temperatures go up, or in the wake of an acute heatwave, there are increases in violence, depression and suicide, which are completely independent of social class,” Haase said.

She and other mental health professionals say the problems that will come with climate change will be so widespread that the current system won’t be able to handle it. Dr. Gary Belkin, a psychiatrist based in New York, is pushing for immediate action.

“We’ve got to get communities and people ready for the social and emotional effects of environmental collapse,” he said.

Belkin is a former deputy health commissioner of New York City and founder of the Billion Minds Institute, which is focused on the social aspects of climate change.

After seeing how people have treated each other during the covid pandemic, Belkin is not confident in society’s ability to pull together, but that’s what he thinks is needed. “Because success in dealing with that and enduring that is going to fall on us and our social ties and our ability to take action and our connectedness,” he said.

“Our profession and the basic setup of clinical mental health services is a very poor match for the challenges that we have now and are just going to be increasing,” he said.

Belkin wants to flip the current model, where individuals seek one on one treatment in an office, on its head and move to a more community-based approach to help people deal with their climate anxiety.