PA cities have a sewer-system problem. Green infrastructure can help — but comes with its own risks | StateImpact Pennsylvania

Coneflowers and trees grow in the rain garden on the corner of Bailey and North 13th streets in Summit Terrace. “These were little babies when we were doing this,” said Rafiyqa Muhammad, who helped create the garden. “Everything has grown.” 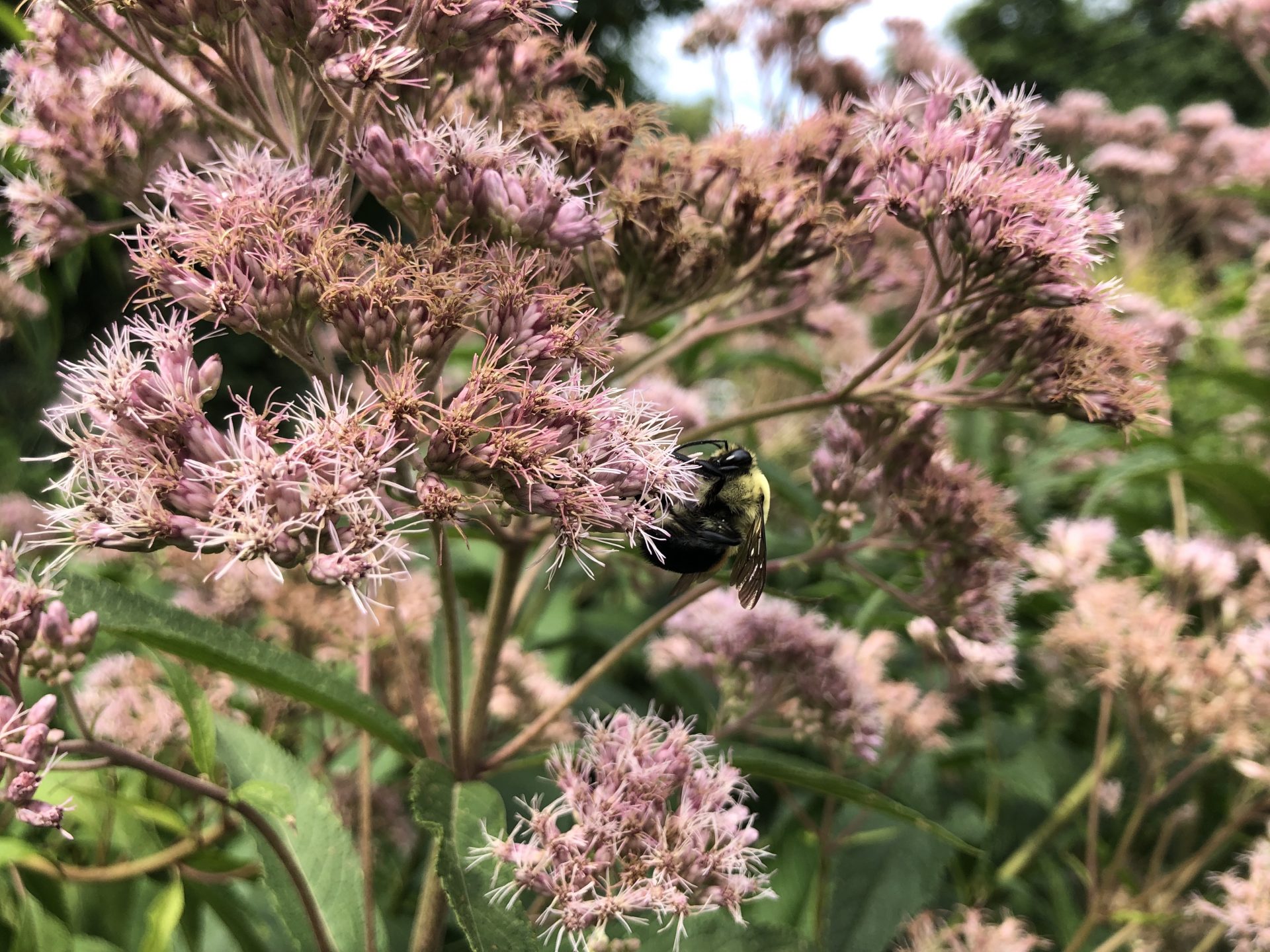 According to an informational sign in the David Samuel Wise, Sr., Memorial Rain Garden, the flowers help attract bees and other pollinators.

Rafiyqa Muhammad opened the gate to a garden in the Summit Terrace neighborhood of Harrisburg on a warm morning in July. It had finally stopped raining, and the trees hummed with the chatter of birds and bugs.

“We need the rain, but of course as the rain hits our streets and our pavements and all, it turns into something totally different,” Muhammad said. “I’m going to use the word toxic.”

Rain gardens like this one, a flower-lined plot about the size of four rowhomes on the corner of Bailey and Summit streets, help keep that water from surging directly into storm drains.

“Trees definitely hold a lot of water, certain vegetation holds water,” she said. “Something is holding it and then slowly dispersing it out, little by little, instead of all at one time.”

Muhammad, who’s lived in Harrisburg all her life and serves on environmental advisory boards for the city and state, is also a community ambassador with the city’s water utility. She partnered with Capital Region Water and the Chesapeake Bay Foundation, which hired her to help put in two rain gardens in the neighborhood a few years ago.

Harrisburg — along with other Pennsylvania cities, including Lancaster, Scranton, and Pittsburgh — are required by federal consent decrees to address growing stormwater management problems.

Rain gardens are among the nature-based strategies, known as “green infrastructure,” that these cities are rolling out as they grapple with the combined effects of outdated sewer systems and stronger storms fueled by climate change. 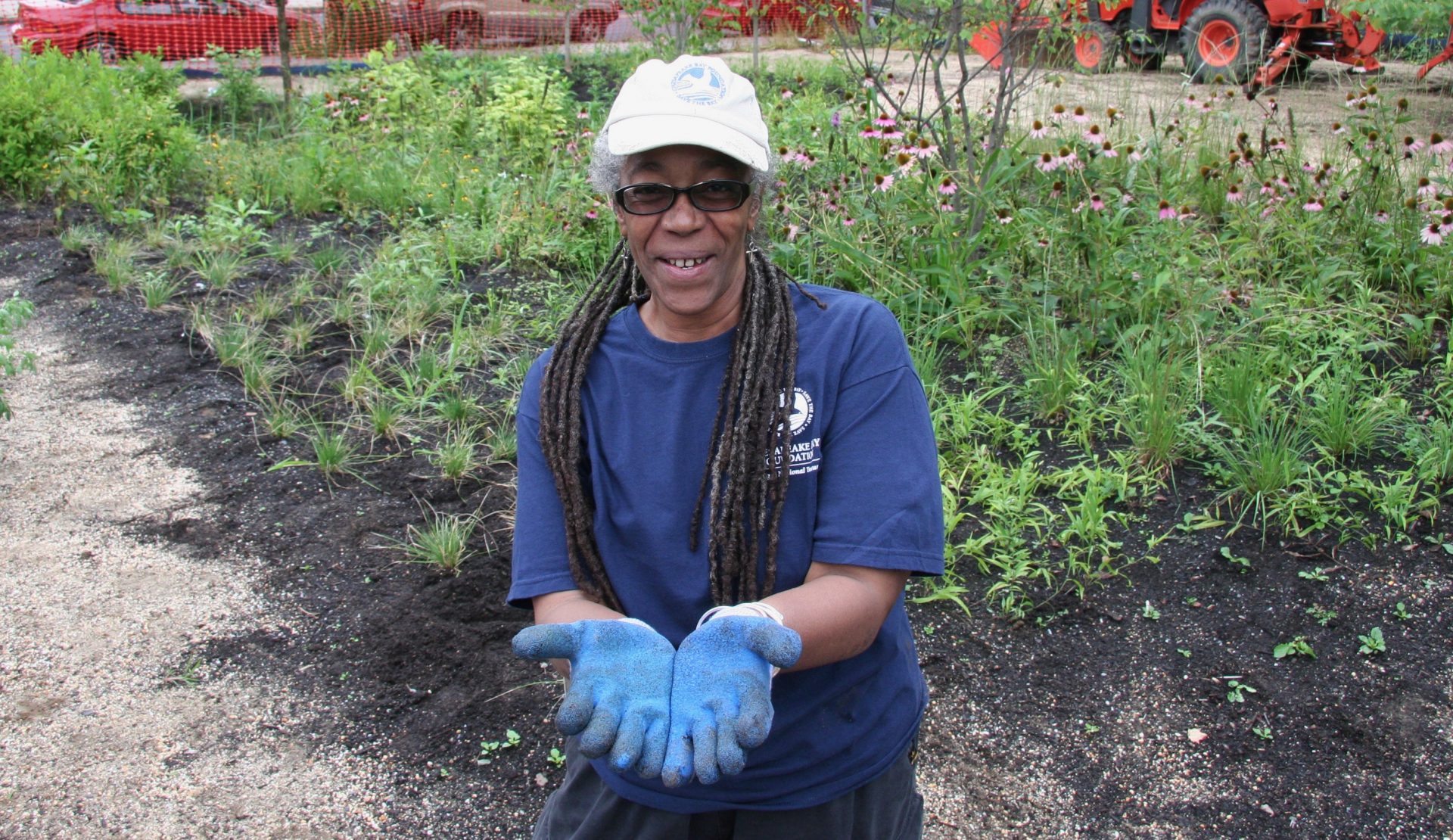 Rafiyqa Muhammad stands in the rain garden on the corner of Bailey and North 13th streets in Summit Terrace just after it was planted in 2018. The goal of these rain gardens, she said, is to slow stormwater down, so it doesn’t overwhelm the combined sewer system.

These projects can have real benefits, Muhammad said. But she believes equitable solutions need to take far more than rainfall into account.

Muhammad, as well as researchers who work on stormwater problems, said that if planners take a broad perspective — considering issues like disparities in housing — green infrastructure holds promise for residents who face the greatest environmental burdens.

Looking at these projects as little more than engineering problems, however, could actually deepen those inequities.

“When I hear ‘stormwater management,’ I look holistically,” Muhammad said. “It’s all interconnected.”

Harrisburg, like a lot of cities in the northeast, relies in large part on what’s known as a “combined sewer system”: wastewater — from taking a shower, flushing the toilet, or doing the dishes — goes into the same pipes as stormwater does.

The system is supposed to carry all that water to a treatment plant before releasing it into the Susquehanna River. But heavy storms can bring more water than the system can handle; in those cases, everything in the pipes — untreated sewage mixed with polluted stormwater — overflows into the Susquehanna and Paxton Creek.

The problem is not a small one: according to a CRW report, Harrisburg’s system sent an annual average of roughly 900 million gallons of untreated water into the area’s waterways over the last five years.

Sampling by the Lower Susquehanna Riverkeeper and the Environmental Integrity Project suggests that levels of E. coli bacteria in the river can be dangerously high. The groups recently filed legal action against the utility, citing inaction on the combined sewer problem.

The overflow points can’t just be plugged, said Jess Rosentel, CRW’s director of wastewater operations. During intense rainfall, they can act as safety valves, preventing the excess water from backing up into streets and homes. But even that doesn’t always work.

“We can get flash-flooding quickly in Harrisburg,” Muhammad said. It happens often enough that she’s started to expect stormwater to pool in certain areas. “Cameron Street is definitely an area that floods, no matter what,” she said.

The consent decrees in Harrisburg and Lancaster followed allegations by the DEP and the U.S. Environmental Protection Agency that the cities’ overflows violated the federal Clean Water Act.

CRW’s plan to address the violations, which is under review by the EPA, devotes a portion of spending to green infrastructure: installations like rain gardens, porous pavement, and plant-covered roofs.

According to the utility, these strategies are more cost-effective than new “gray infrastructure,” like storage tanks and pipes.

Brian Humphrey, who has lived in Summit Terrace since he was born and also serves as a CRW community ambassador, said the rain gardens make a difference. “They’re helping tremendously,” he said. “You don’t see the area flooding like it used to.” 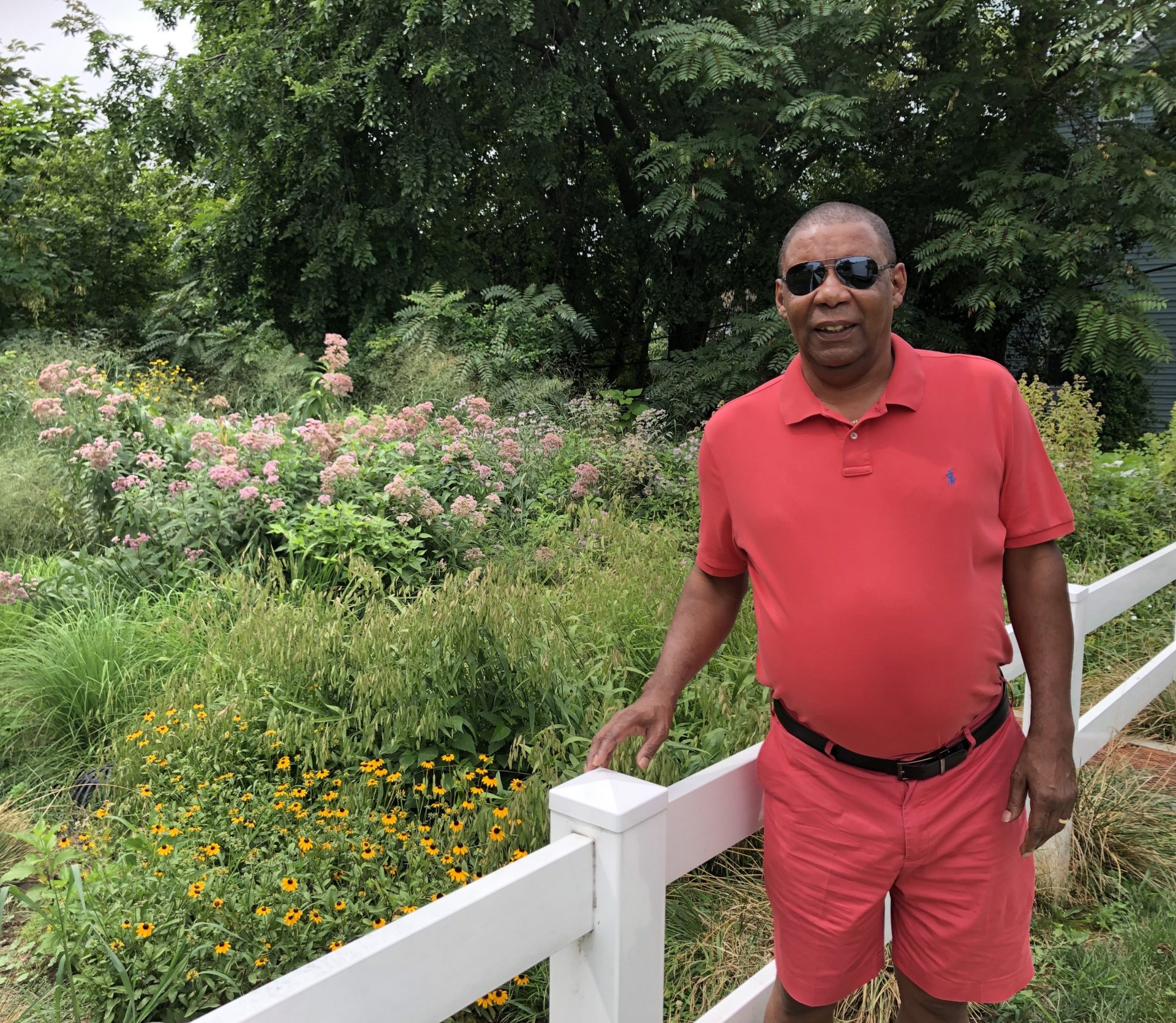 Brian Humphrey, vice president of the Summit Terrace Neighborhood Association, stands next to the David Samuel Wise, Sr., Memorial Rain Garden on the corner of Bailey and Summit streets. “You get people some mornings, sitting here, just enjoying it,” he said.

In Lancaster, where the combined sewer system overflows into the Conestoga River, the city government has provided funds for almost 60 green infrastructure projects over the last several years.

The mix of stormwater management strategies Lancaster will use isn’t final yet, but the city’s most recent report on green infrastructure emphasizes that the projects can have other benefits, including air quality improvements and increasing access to green space.

“It’s not just solving for stormwater itself,” said Stephen Campbell, Lancaster’s director of public works. “It becomes a multi-faceted project, rather than just a green infrastructure project.”

Winnie Okello, who goes by Winnie O., is a professional civil engineer who co-founded the Community Working Group for Harrisburg’s next comprehensive plan. She said a real cost-benefit analysis of green infrastructure requires planners to think about value in a new way.

For instance, researchers have found links between green space and improved mental health, though they’re still investigating the reasons for that relationship.

“To some people, grass is grass is grass,” Winnie O. said. To her, it’s clear that infrastructure planning needs to take into account more than the price tag.

Given green infrastructure’s additional benefits, the EPA has pointed out that it has the potential to address environmental inequities.

Because of racist zoning policies and government-sanctioned redlining, for example, many people of color live in areas with less cooling green space and more intense heat waves.

Fushcia Hoover, who studied green infrastructure at the National Socio-Environmental Synthesis Center and will continue her work at the University of North Carolina-Charlotte, said those considerations are crucial. But she also warned that there’s more to the story when it comes to housing policy: historical and ongoing housing segregation means these projects could also pose risks for low-income neighborhoods and communities of color.

For instance, Hoover said, neighborhoods that have experienced that kind of codified disinvestment could be vulnerable to what’s known as “green gentrification.”

Urban studies scholars are still teasing apart this phenomenon, she said. But research suggests that green infrastructure projects can be associated with a rise in property values, leaving some residents unable to afford housing anymore.

“Then we’re just replicating the same process of unequal investment in our communities of color,” Hoover said.

One way to combat that, Hoover and other researchers suggest, is to pair green infrastructure projects with policies like rent control, which aim to prevent gentrification.

Kate Austin, who works in Lancaster’s Bureau of Stormwater Management, said residents have raised concerns about green gentrification. She acknowledged measures like rent control could be a focus of the comprehensive plan the city is working on now.

“That’s something that we want to stay very connected to as we’re moving forward,” she said.

Ultimately, Hoover said, communities themselves should decide what kinds of stormwater infrastructure they want in their neighborhoods.

In Summit Terrace, Muhammad said, the community held meetings with CRW before the rain gardens were planted, so residents could participate in the planning process.

She said it’s a step in the right direction.

Winnie O. believes that will mean making collaboration between city planners and residents the norm for infrastructure projects.

“People want green infrastructure, people want parks, people want recreational spaces, people want healthy environments. But what they also want is access,” she said. “Who is present at these decision-making tables? That’s what it really comes down to.”