FILE PHOTO: The dome of the Pennsylvania Capitol is visible in Harrisburg. 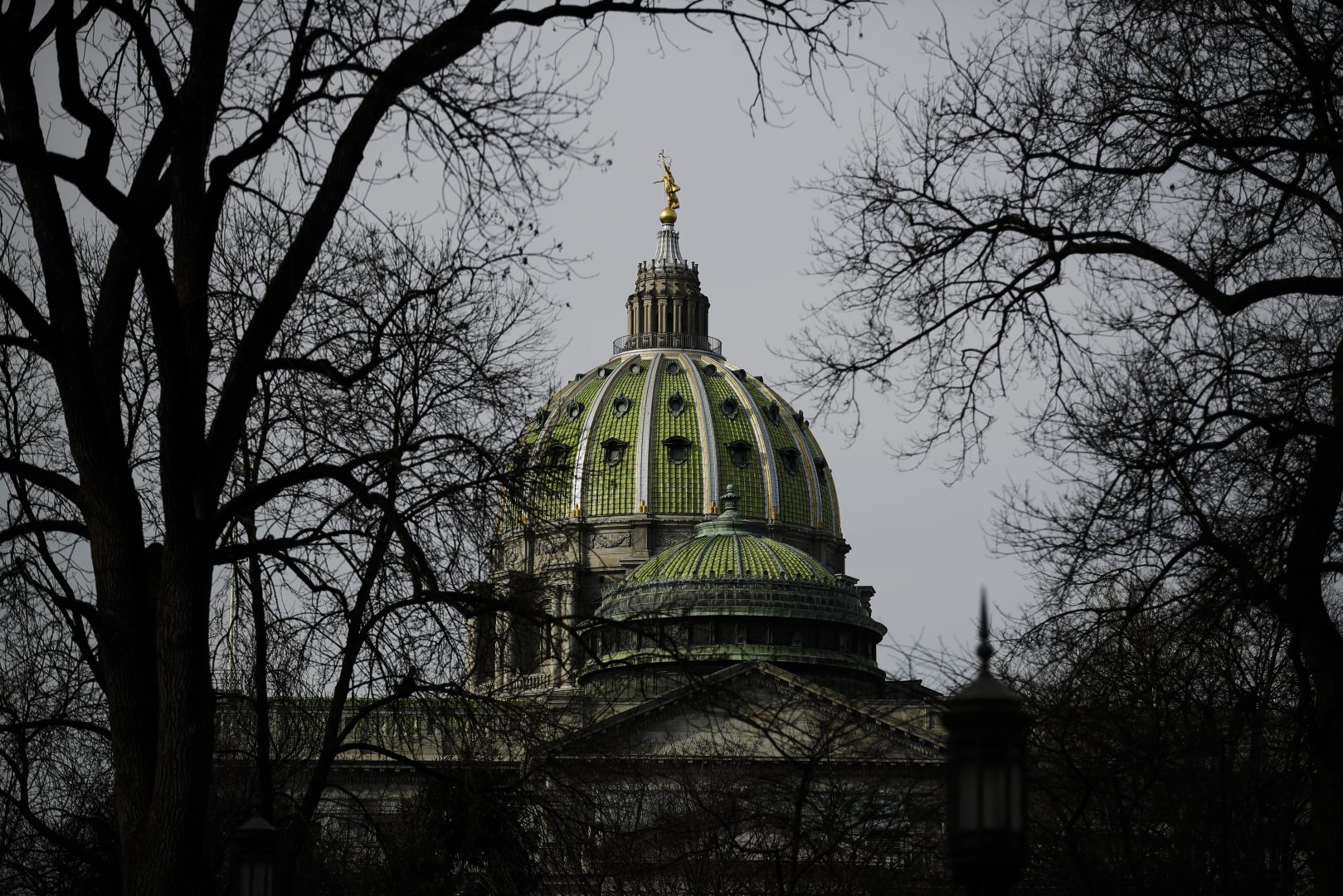 FILE PHOTO: The dome of the Pennsylvania Capitol is visible in Harrisburg.

State Senate Republicans say they will block Gov. Tom Wolf’s appointments to Pennsylvania’s utility regulator unless he stops his effort to have the state join a regional cap-and-trade program targeting power plant emissions.

It’s the latest escalation of their fight against the Regional Greenhouse Gas Initiative (RGGI), which they say will hurt coal communities.

The move shocked some environmental and consumer protection groups, who say Republicans are holding the Public Utility Commission hostage over an unrelated policy decision.

The PUC has been short a member since last April, when Andrew Place resigned after serving one five-year term.

In August, Wolf nominated Hayley Book, a Department of Environmental Protection climate adviser who is leading the rulemaking that would have the state join RGGI. He nominated her again at the start of the 2021-22 legislative session.

On Wednesday, about a month before the deadline to confirm the nomination, all 27 Republican members of the state Senate, plus one Independent, wrote Wolf saying they would block all nominations to the PUC unless he pulls his decision to join RGGI.

“For months, the General Assembly has been expressing concern regarding your excessive use of executive orders and the rulemaking process to achieve substantial policy changes rather than vetting them through the legislative process set forth in the Constitution,” the lawmakers wrote, adding the decision to join RGGI was one of the most “brazen” actions.

Clean Air Council attorney Robert Routh called the letter a ransom note that Republicans sent because they don’t have the votes to block RGGI outright.

“Today it’s about RGGI,” Routh said. “This sets an ugly precedent because tomorrow it could be about some other policy dispute.”

Routh said no one has questioned Book’s qualifications for the job; she was a policy adviser to former Commissioner Place before taking her role at DEP. Routh added Republicans haven’t proposed an alternative to addressing carbon emissions or helping communities that have suffered over the last decade as a result of coal job losses.

Former DEP Secretary David Hess said in recent decades, most holdups over PUC nominees were inside baseball, but the move by the Senate GOP is a public line in the sand.

“They could have just voted her down, but they didn’t; they went further, potentially jeopardizing the operation of the PUC, which has literally nothing to do with the RGGI proposal or its implementation,” Hess said.

The PUC provides economic, safety, and quality of service oversight for nearly 7,000 entities that deliver electricity, natural gas, and water to people’s homes and that operate pipelines and railroads. It is not an environmental regulator, and has no role in administering RGGI in the proposed rule.

In the letter, Senate Republicans say the PUC is involved with RGGI because it is working with regional electricity grid operator PJM Interconnection “to promote the integration of this program” without disruption in its territory, which includes four of RGGI’s 11 northeastern states.

In a statement, Senate GOP spokeswoman Erica Wright said they oppose Book’s nomination “as the PUC has significant oversight in energy and rate regulation.”

In testimony before the Senate Environmental Resources and Energy committee last session, PUC Chairman Gladys Brown Dutrieuille noted the commission is neutral on whether the state joins RGGI.

Wolf’s office said it was “appalling” that “the GOP is choosing to play politics not just with the PUC, an independent Commission, but also with climate change at a time that they have suggested zero solutions and have actively opposed any meaningful action.”

Scientists say greenhouse gas emissions must be cut dramatically in the next few decades to avoid the worst effects of climate change. Supporters of Pennsylvania joining RGGI say it would be the most significant step the state has taken to address climate change to date. The Wolf Administration estimates the program will bring in $300 million in the first year, part of which Wolf wants to direct to help affected communities.

A spokeswoman said Wolf welcomes feedback from the General Assembly on ways to reduce the commonwealth’s emissions while strengthening the economy, but that he will not pull back on efforts to join RGGI.

Consumer advocates are concerned a diminished board will have consequences for low-income rate payers, especially.

A maximum of three members of the governor’s political party can serve on the PUC at one time, per a 2002 law. So, even though all current members have been appointed or reappointed by Wolf, they are not ideologically aligned.

With four members, the board has deadlocked on several decisions in the last year. Notably, the PUC was unable to reach a consensus on when to lift the moratorium on utility shut-offs put in place because of the pandemic. Members reached a compromise last fall and the emergency moratorium lifted April 1.

Another commissioner’s term is up this year, which will leave Republicans with a two-to-one majority. Wright said the Senate GOP is not concerned that holding up nominations will hinder the commission’s work.

But Elizabeth Marx, who directs the Pennsylvania Utility Law Project, said, “Now is not the time for the commission to be understaffed and unable to carry out its mission with a full complement, as intended.”

She said the commission will soon decide on half a billion dollars worth of rate increase proposals. Some could affect the 800,000 customers who are already at risk of losing service because of the pandemic.

In addition to rate increases, several other big issues are coming up before the PUC, said Logan Welde, legislative director for Clean Air Council. They include decisions about alternative ratemaking structures for utilities, electric vehicle infrastructure, and a rulemaking on pipeline safety.

“Without an efficiently-working, five-commissioner PUC, it’s going to be difficult to make good policy,” Welde said.

A PUC spokesman said all commission operations are continuing.