Life along the Delaware: Better access to Philly’s two rivers could open spaces on hidden shorelines

WHYY asked five individuals to tell us about their visions for the Delaware River Watershed — what it is, and what it could be.

Stacy Levy is an artist who works with rain, urban tides, and watersheds. She has created temporary and permanent works in Philadelphia, New York, Seattle, Phoenix, Tampa, Miami, San Antonio, and Fayetteville, Arkansas. She has been awarded the Henry Meigs Environmental Leadership Award, the Penn Future Award for Women in Conservation, and a Pew Fellowship in the Arts.

Growing up in Philadelphia, I never knew where the Schuylkill River met, and flowed into, the Delaware River. The city sits tightly cinched between our two rivers, but the relationship of the big river and the little river is a bit of a mystery.

Most of us can identify iconic fragments and glimpses of the rivers — we know we’re seeing the Schuylkill when we go down Kelly Drive — but where does the Schuylkill go after it passes the boathouses? Where is the river’s mouth? As a kid, I thought the Schuylkill just disappeared under the city.

Watershed literacy, from mapping rivers to telling tides, was much more widespread when we used water to navigate, communicate, and transport goods. Two centuries ago, nearly everyone would have known how their local waterways connected, because these waters were essential corridors for moving between places. When networks of railroads and overland roads became more robust, most people lost a sense of the connectivity of the water. Regular life no longer gave us cause to touch the water. We did not have to think about our local rivers and the ways they might change daily or seasonally, impacted by floods or droughts. A lot of our relationship to waterways just dropped out of our everyday experience. 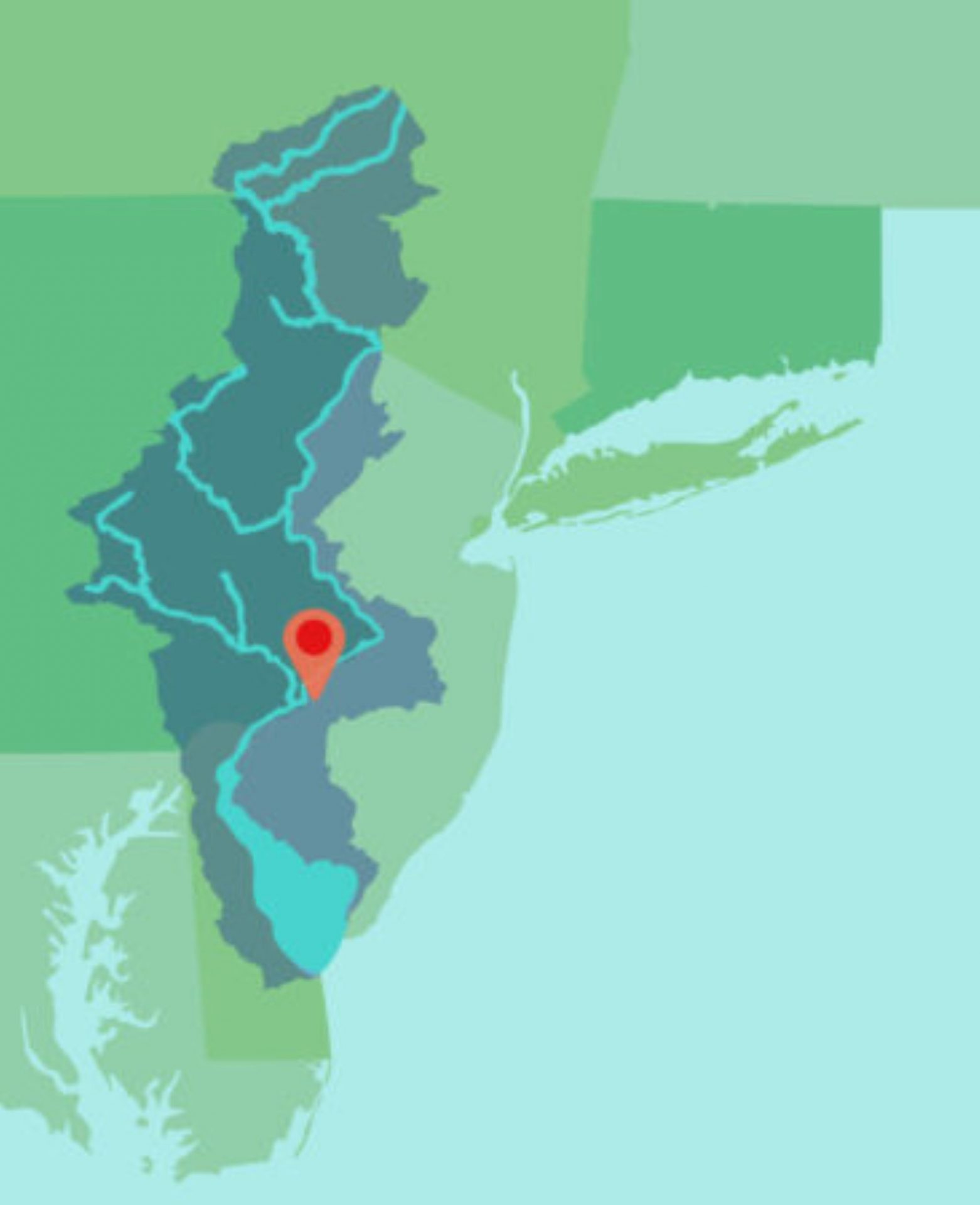 Our broken relationship with water has taken a huge toll. Shorelines, which used to be a zone for living things, were covered over by stone and concrete embankments that continue to bind the river and prevent access to it. In cities, there are very few places you can actually get down to the water. Industries ate up the Delaware’s shoreline because it was a prime location for manufacturing, shipping, and disposing waste into the water. Along the banks, you could abuse the river quietly. Now, as industrial sites sit vacant along the river, the water gains a new, equally privatized value: It is an expensive luxury space, with a view. Industry and wealth are still functioning as gatekeepers to the river’s edge.

But what if the river was more like a commons? As the climate crisis accelerates, this is a pressing question. What if the shorelines were lush with trees and birds and peaceful, shady places to walk and hang out? What if, on a hot July day, you could walk down to the Schuylkill and take your kids for a swim? We have lost sight of the idea that our urban rivers can (and should) be fishable and swimmable. As the threat of deadly heat episodes increases — especially in neighborhoods with fewer trees, which are also our neighborhoods with lower incomes and more residents who are Black, Indigenous and people of color  —  cooling shoreline access for everyone should be a priority. Taxpayers helped fund a $400 million project to deepen the Delaware channel for massive container ships, but there are no clean and safe places for us to get down to the shady river shore and splash in the cool water.

When I set out to make a liquid map of the Delaware watershed, by gathering live water and bringing it into the gallery, I had to find every tributary and collect a water sample from each. I experienced the thrill of learning exactly where the waters flow through the land, and I was able to solve the “river mystery” in my mind: finding the place where the Schuylkill runs into the Delaware at League Island. After driving to each tributary with my buckets and muck boots, I could finally locate my neighborhood within the larger network of the watershed. I’ve made a few liquid watershed installations around the country, and these collected water maps give other people a chance to walk through miniature watersheds, and to learn their watershed address.

Learning a watershed is like tracing your family tree — there’s a sense of untangling of relationships and seeing that you are part of a pattern. Like families, watersheds flow in tree-like, dendritic patterns. One of the things I want my art installations to do is encourage us to think of our watersheds as connected as family trees — just like the different generations, each stream leads to the next, and all the waterways are related to each other with their shared water.

It’s important for us to feel a sense of belonging within our watershed, both because there is an essential pleasure in knowing we are at home in the world, and also so that we take up the shared responsibility to care for this vital resource. I think a lot about watershed literacy — we have to understand that when water falls out of the sky in the form of rain, it is going somewhere: down, down to the sea. There is this whole complex, beautiful system that drains the rain from the earth, like capillaries across the landscape. We are living within these immense connected cycles, but we often don’t keep an eye on our waterways, we don’t look after them well — maybe because they are so often hidden under roads and concealed inside pipes. Our hidden creeks become apparent only when it rains hard and the waters rise up from their confinement under street intersections like the ghosts of past streams.

In a more watershed-literate society, we would all be keenly aware that what happens in our local waterways affects people downstream. There’d be a social compact with people up and downstream, acknowledging that they are our watershed neighbors. If we kept the health of water at the top of our minds, water would be treated as a valuable asset, one that we borrow and ultimately send along downstream for humans and other species. 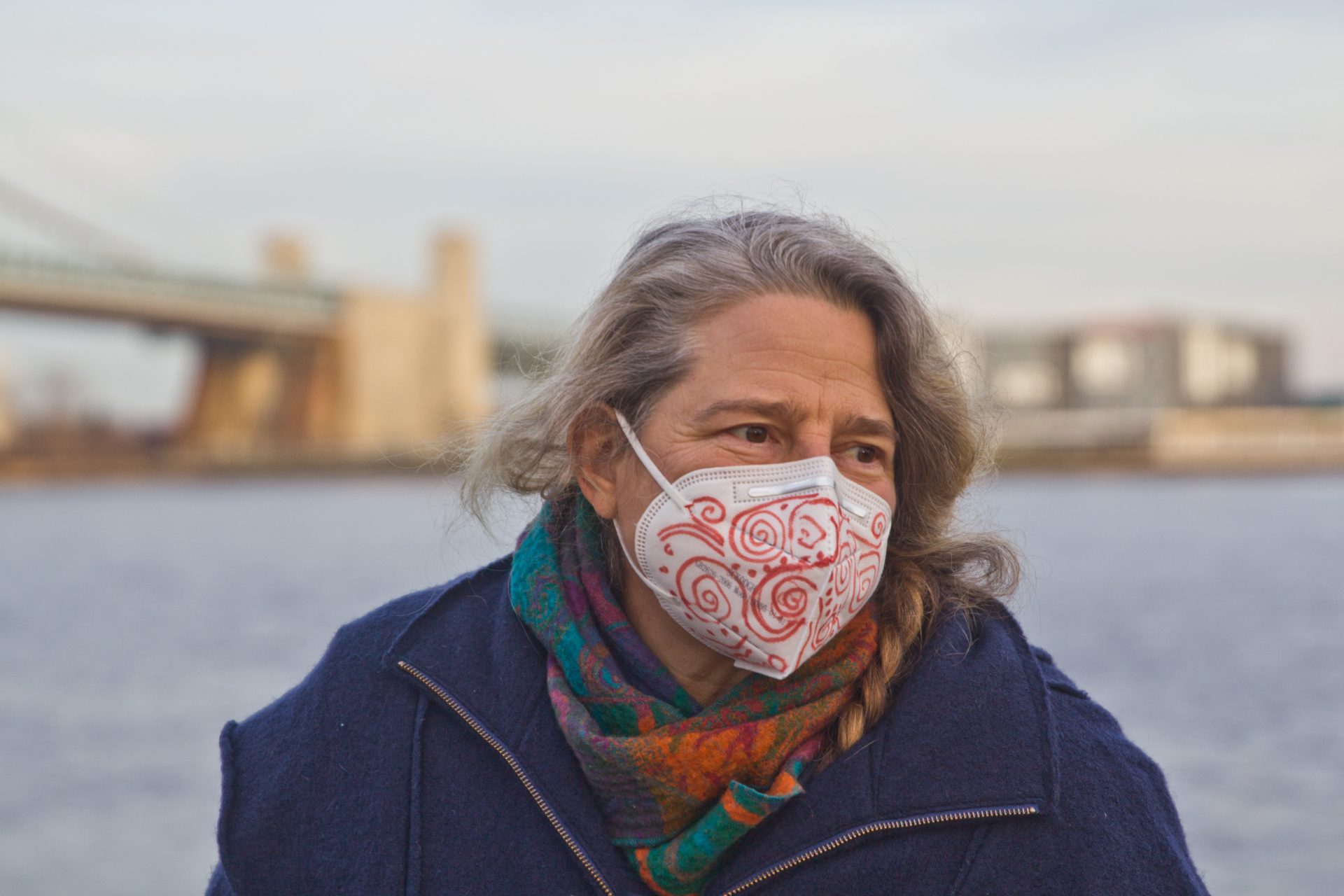 More watershed literacy would also look like more attention to places where waterways connect. We’d monitor water quality at critical junctures, gaining a better sense of what is entering the watershed, and have a chance to address issues of pollution and erosion. We’d also celebrate the confluences: the places where a stream meets a river, where the Schuylkill flows into the Delaware, connecting us with our downstream neighbors — these should be extraordinary spaces for celebration and honor. When we don’t know our local waterways, we jeopardize our ability to care for them. The streams and rivers pass under our noses, gathering sediment and pollution that we barely notice. In turn, we lose out on their ecological, recreational, and spiritual functions.

Projects like Tide Field, which I created in 2018 in collaboration with Mural Arts and Bartram’s Garden, are about both literacy and celebration. Tide Field was an invitation for Philadelphians to observe and celebrate the impressive tidal range of the Schuylkill. Most of us are unaware that our two rivers are tidal, with waters nudged up and down by the tides of the Atlantic Ocean — the Schuylkill rises and falls by six feet every six hours. I wanted to bring attention to this great watery clock rising and ebbing in the city, so I created a series of tide-telling buoys. You could read the tide by noticing how many buoys were visible. At low tide, the strands of nine buoys would lay flat on the surface of the river. As the tide rose, the water covered more of the buoys, so, eventually, at high tide, only three red buoys were still visible, bobbing in the water. I thought of it like a river abacus, something very analog that people could use to ground themselves, to take note of their tide readings throughout the day or the week.

I do think art can grab hold of us, activating desire in a way that a Google map or a digital tide chart cannot. I make art as an invitation to people to come down and witness our water, learn about it, spend time with it, read it. Art can provide a new way to understand the patterns and processes of urban nature. It can make places that celebrate and explain. Art can open up new spaces of welcome on shorelines that have been hidden away from us for so long.

I hope that watershed literacy and celebration can be a way for Philadelphians to feel more connected to our two rivers — and that this relationship can help us feel empowered towards stewardship, delight and activism on behalf of our rivers and each other. We need to care for our waters. And in turn we need to celebrate the tender aspects that the rivers offer us humans: beauty, rejuvenation, recreation, and cooling.

The audio was reported and produced by StateImpact Pennsylvania reporter Susan Phillips.

This series of essays is part of the broader “From the Source” project and is supported by the Lenfest Institute, the National Geographic Society, and the William Penn Foundation.