Opponents of the planned PennEast Pipeline say the company is attempting to mislead the public over the need for the pipeline, which would run from Pennsylvania through towns like this in Milford, NJ. 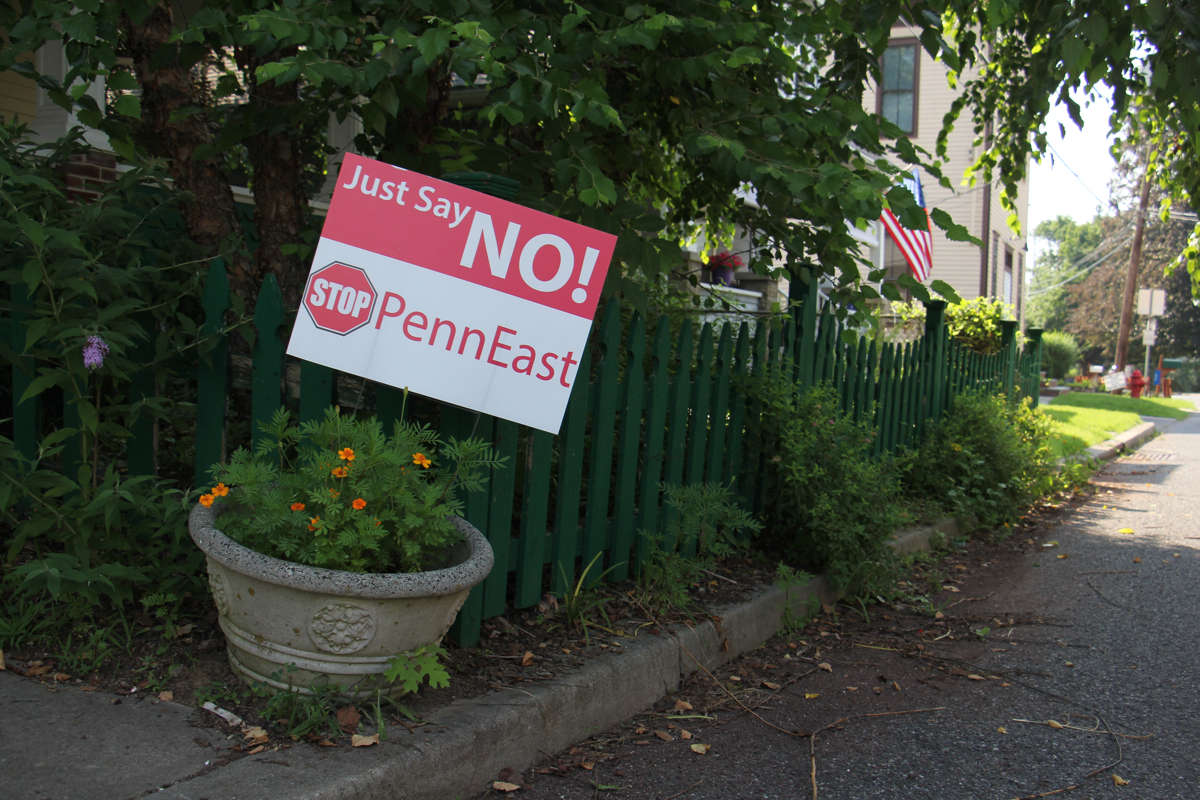 Opponents of the planned PennEast Pipeline say the company is attempting to mislead the public over the need for the pipeline, which would run from Pennsylvania through towns like this in Milford, NJ.

The U.S. Supreme Court will hear an eminent domain case pitting the state of New Jersey against the PennEast pipeline company.

The 116-mile line would ship Marcellus Shale gas from Northeast Pennsylvania across the Delaware River to New Jersey, to provide what the company says is much needed, affordable natural gas to residents. But New Jersey wants to block the project from state-controlled conservation land, and argues seizing the land through court action is unconstitutional.

In 2019, a three-judge panel of the Third Circuit Court of Appeals in Philadelphia reversed a lower court’s decision, saying that condemning public land violates the 11th Amendment. The amendment gives sovereign immunity to states, shielding them from private lawsuits.

The PennEast pipeline company appealed the decision. It wants to build part of its natural gas pipeline through 44 state-controlled parcels of land in New Jersey. The Federal Energy Regulatory Commission had granted the company eminent domain authority, which allows it to seize land from uncooperative property owners.

But New Jersey Attorney General Gurbir Grewal said the state-owned properties are open space preserved for recreation, conservation and agriculture and should not be used to ship natural gas.

“We firmly believe that a private party like PennEast has no right to condemn state lands in court, and we look forward to pressing our arguments to the U.S. Supreme Court,” Grewal said in a statement on Wednesday. “When the Court reviews the merits of this case, we believe they will recognize what the Third Circuit did — that New Jersey must prevail.”

The more than 40 properties at issue in the case include public state-owned land as well as private land with conservation easements. The project would cross dozens of waterways and wetlands, as well as the main stem of the Delaware River. PennEast says it will minimize impacts to waterways by drilling beneath streams where possible, and restore streambeds after construction is completed.

PennEast praised the decision by the Supreme Court to take the case, saying the federal Natural Gas Act does allow private companies, with FERC’s approval, to seize land through eminent domain. In briefs to the court, the company has argued the NGA purposely prevents states and local governments from blocking interstate pipeline projects approved by federal regulators.

“Congress passed the Natural Gas Act specifically to avoid state and local vetoes of interstate projects found by federal regulators to be in the public need and benefit,” PennEast board chair Tony Cox said. “The misguided Third Circuit ruling in fall 2019 turned nearly 80 years of federal government interpretation and industry practice on their heads.”

Since the Third Circuit’s ruling, PennEast sought FERC’s approval to build the pipeline in two stages, starting on the Pennsylvania side where it has already gained most of the necessary permits. If approved, the line would have interconnections with Adelphia Gateway and Columbia gas transmission pipelines in Northampton County. Cox says the company plans to have the Pennsylvania section of the route completed and in service in 2022, while the New Jersey section would be operational in 2024.

The Department of Justice sided with the company in the waning days of the Trump Administration. Environmental groups hope President Biden will reverse course and back New Jersey’s position.

“It’s important for states who have decided to preserve land for environmental and other preservation reasons to be able to protect those interests from pipeline companies.”

Biden has withdrawn federal approval for the Keystone XL pipeline project and put a moratorium on oil and gas production in the Arctic National Wildlife Refuge.