In the Ohio River Valley, with the pandemic’s help, the petrochemical boom is on hold | StateImpact Pennsylvania

John Haswell, superintendent of the Shadyside Local School District in Shadyside, Ohio. His district would get a $30 million school building if PTT builds a proposed ethane cracker in Belmont County, Ohio.

In the Ohio River Valley, with the pandemic’s help, the petrochemical boom is on hold 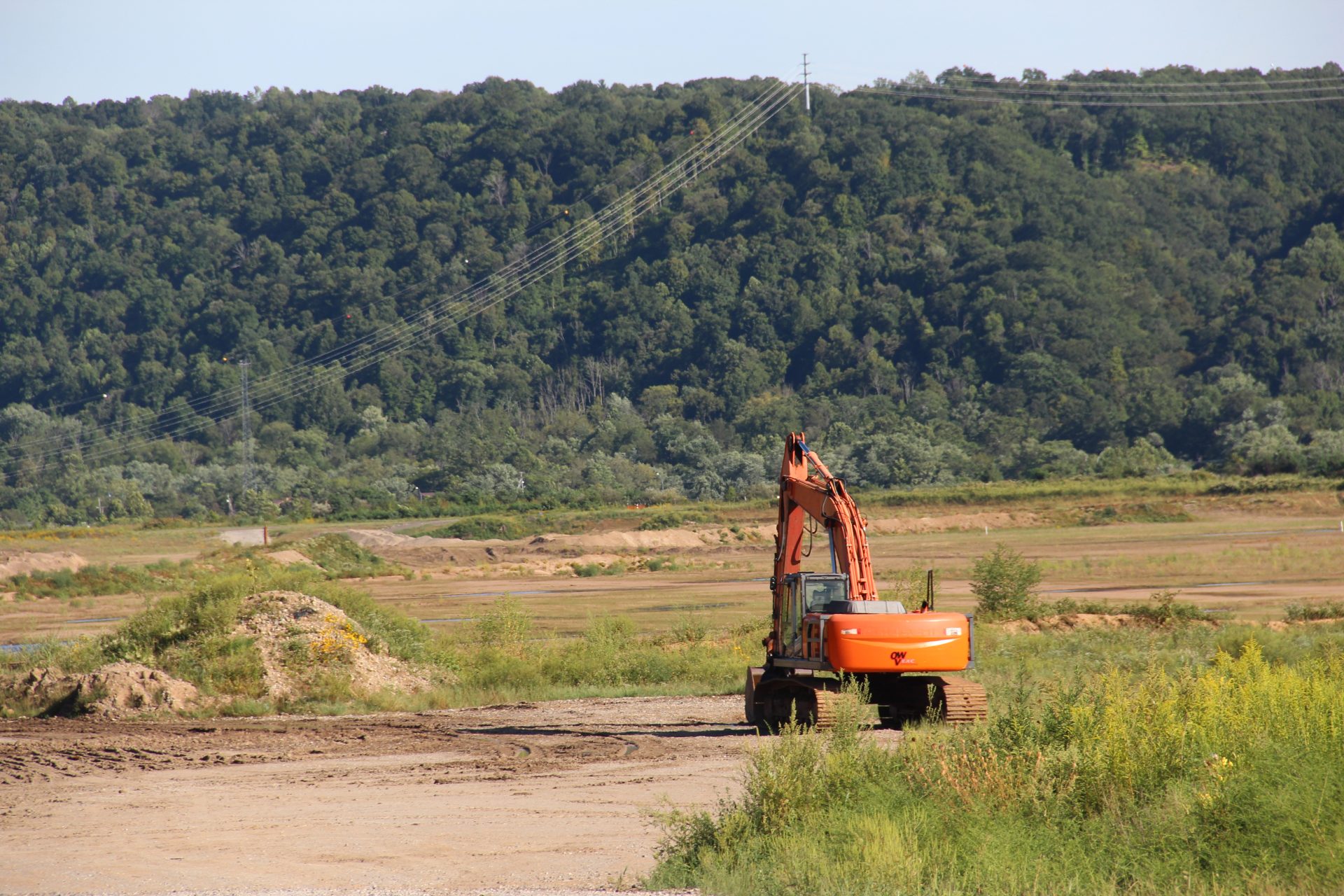 The site of a proposed ethane cracker in Belmont County, Ohio.

At a marina in Moundsville, West Virginia, Dan Williamson looked out across the Ohio River at a quiet stretch of land on the other side.

“There’s a little activity going on,” said Williamson, a spokesman for PTT — an oil and gas company based in Thailand that wants to build an ethane cracker on the far side of the river, in Dilles Bottom, Ohio. “But really we’re kind of in between phases right now.”

The plant would turn the region’s plentiful natural gas into plastics. It’s taken years to develop, and a final decision on whether the company would build the plant was due this summer. But then came the pandemic.

“It just kind of changed the game for all industries, including this one. And so they have had to put off their announcement of a decision,” Williamson said.

For years, industry boosters in Appalachia have promoted the idea of a building boom for petrochemical plants like the PTT ethane cracker.

Oil and gas backers have said there’s enough gas in the region for four or five chemical plants like this. But so far, only one of those plants is a ‘go’ — Shell, with the help of $1.65 billion in state tax breaks, is building a giant plastics plant in western Pennsylvania.

But other projects have either been dropped or put on hold, and now the pandemic has left some some communities in the Ohio River Valley wondering if those plants will ever get built.

A project in West Virginia was canceled last summer when its Brazilian owners backed out. A planned $84 billion Chinese investment in West Virginia’s gas and chemical industry has yet to materialize. And PTT has watched as potential partners backed away from the project. Matsubeni, a Japanese company, initially signed on as a partner but was out of the picture by 2016.

In July, Daelim, a Korean chemical company that had agreed to invest in the PTT plant, cited the pandemic when it backed out of the project, which could be the largest of its kind ever built in the U.S. according to PTT.

Williamson says PTT is still looking for investors, but he says the real barrier for the plant is simple: COVID-19.

“I believe and the project leaders believe that if not for the pandemic, it would be under construction right now,” Williamson said.

Some aren’t so sure.

She says Daelim’s decision to pull out of the PTT project is a red flag.

“We view this as a market signal that the project has possibly become far too risky for them to continue,” Hipple said. “The other possibility is that the economics of building a petrochemical complex have changed tremendously.”

Hipple said the price of plastic has fallen by around 40 percent since PTT first announced its interest in the site five years ago, pushed down by new supply from new plants built on the Gulf Coast. She thinks a wave of environmental policies around the globe — like bans on single-use plastics — could threaten the industry’s bottom line.

Steve Lewandowski, an analyst at the research firm IHS Markit, thinks there will still be demand for plastic in the next few decades.

But he also wonders if delays in the Ohio project might be a sign that the $10 billion plant is looking too expensive for investors.

“If it was such a compelling case to build there, that cracker would have been approved under construction and then it probably would be another one on top of that — and it’s not,” Lewandowski said. “So there’s something going on that is causing companies to say, ‘That’s probably not the right place to be.’”

Lewandowski said Northern Appalachia has advantages — Ohio, West Virginia and Pennsylvania sit atop the Marcellus Shale, the biggest natural gas formation in the country. And it’s close to East Coast and Midwest manufacturers that would use the plastic. But he thinks companies might want to keep their production centered on the Gulf Coast, where dozens of similar plants have been running for decades.

“We’re assessing that the cost to build (in Ohio) is higher than on the Gulf Coast. And we would we would argue it’s probably going to be a bit more expensive to operate only because they’re not really in a cluster of industry.”

If a part breaks down at a plant in Louisiana, there’s a better chance that a supplier nearby will be able to replace or repair it than there would be in Ohio, he said.

But closer to the proposed Ohio plant site, there are fewer doubts. In August a senior Trump administration official visited the site and said it would boost the Ohio River valley’s economy. 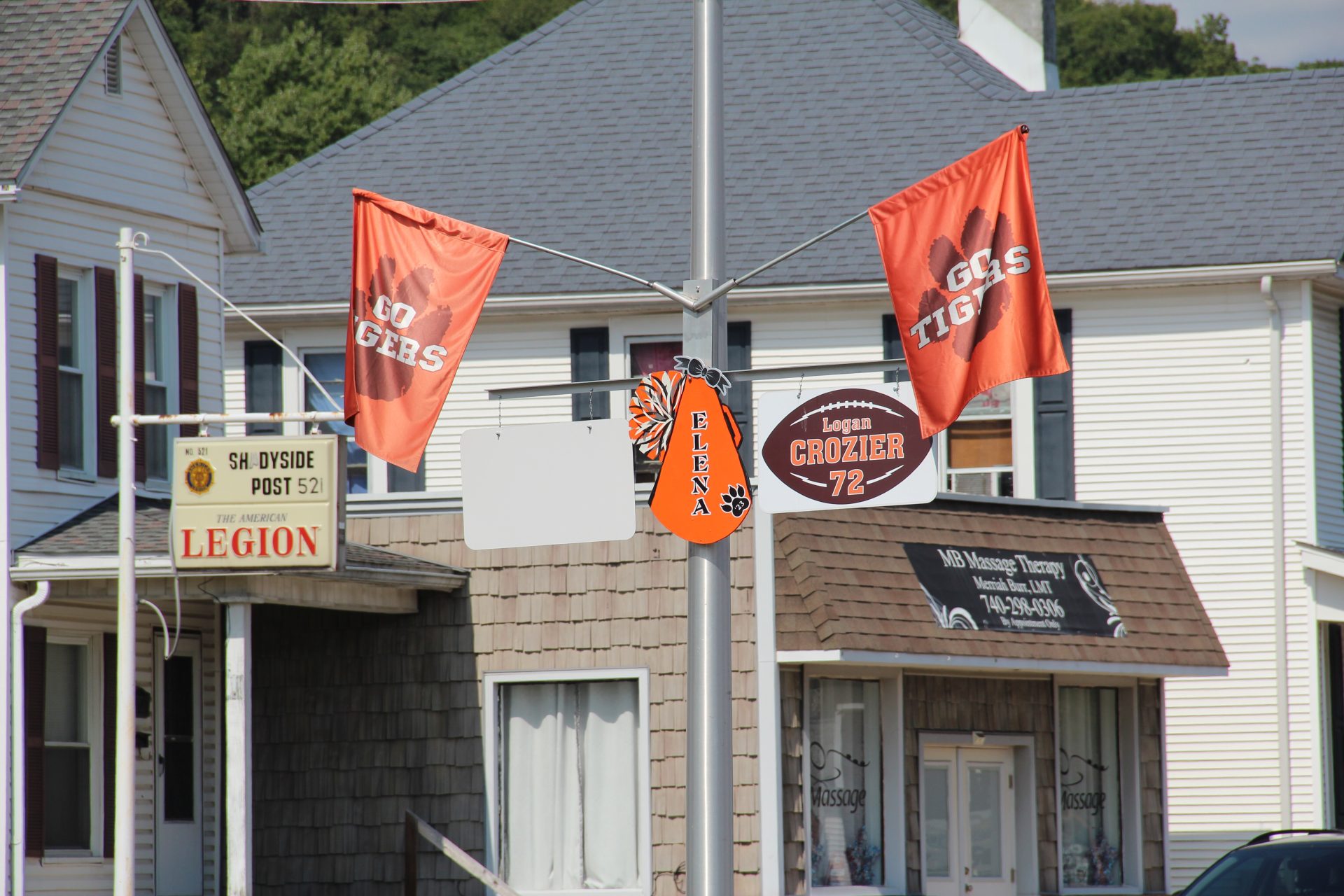 Shadyside, Ohio, a few miles from where PTT has proposed building an ethane cracker in Belmont County, Ohio.

Coffland is a big proponent of the PTT project — and it’s easy to see why. He owns Matt’s Tiger Pub — a tavern in the town of Shadyside, Ohio, a few miles from where thousands of hungry construction workers could one day build the project.

“I mean, it’s three miles away from my doorstep. And you’re talking an influx of close to ten thousand people at one point,” Coffland said.

Coffland sees the plant as a good thing not just for his restaurant but for his part of southeastern Ohio — which he says has been neglected by the state in favor of the ‘three Cs” — Cleveland, Cincinnati and Columbus.

“I think we deserve it by now,” he said. “Finally, something is going to land right here in our lap. You know, it’s about time.”

Someone else who’s hoping the project moves ahead works in a school building a few blocks away.

John Haswell is superintendent of the Shadyside Local School District.

On the wall of his office hangs a set of drawings showing what a K-12 school complex would look like.

If PTT builds its chemical plant, the company agreed to pay for the new building.

The district’s 700 students are in a school built 1932, and Haswell says a new building is badly needed.  Uncertainty over whether the PTT project will go forward — or whether he’ll have to ask taxpayers for more money to build a new school — has made him anxious. 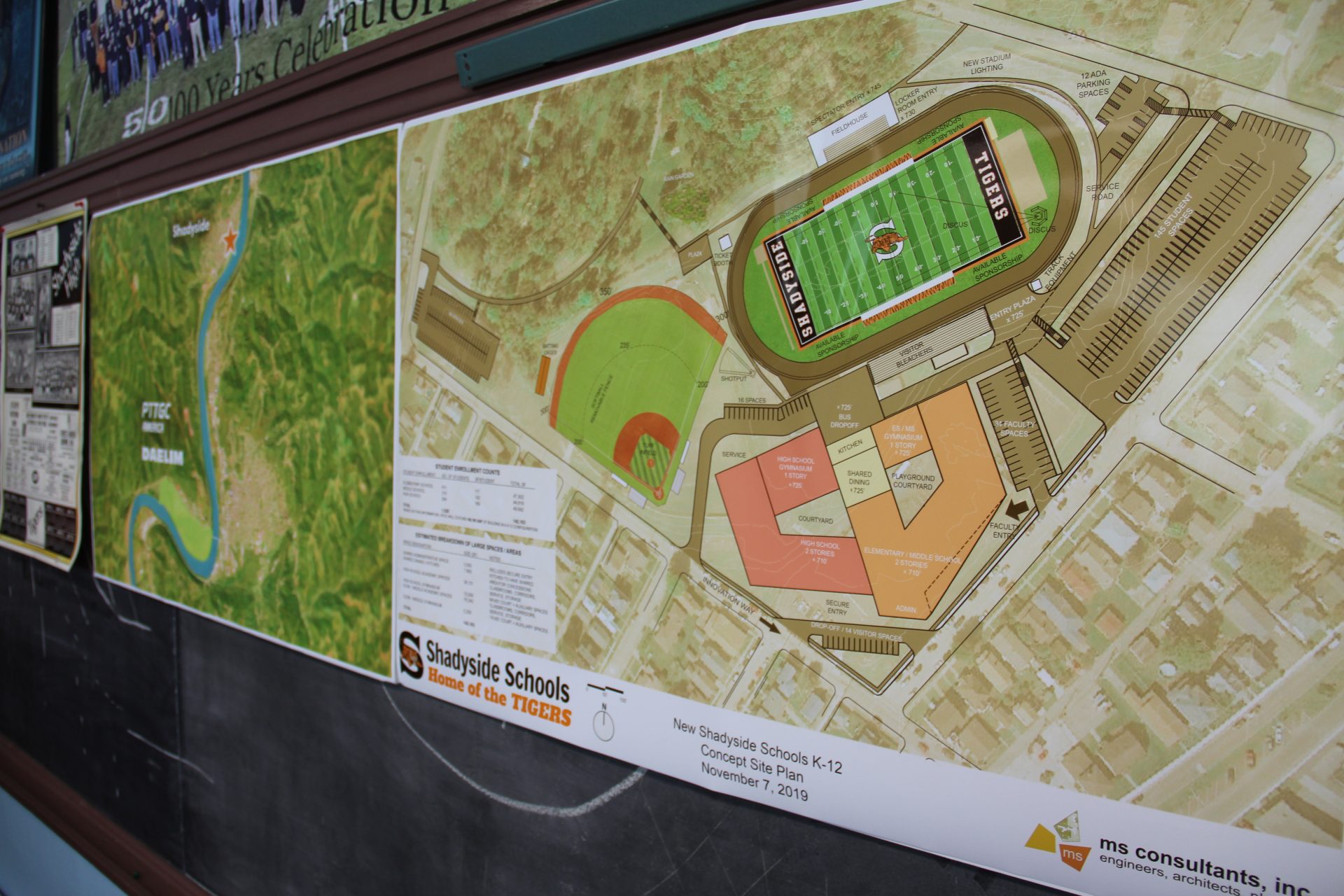 The proposed Shadyside, Ohio school complex would be paid for by PTT, the Thai company which has proposed building an ethane cracker in Belmont County, Ohio.

If the delay has made Haswell antsy, it’s been a reprieve for Amanda Petrucci. She and her husband live with their four children and seven goats on a hillside across the Ohio river in Moundsville, West Virginia.

On a recent afternoon, she pointed out a few landmarks — a hilltop across the river where a well owned by an ExxonMobil subsidiary blew out in 2018, releasing 60,000 tons of the potent greenhouse gas methane, a natural gas processing plant a half-mile from her front door, which flares gas at all hours, and a Superfund site just down the hill.

The site used to house a chemical plant. In the 1990s, the U.S. EPA declared it a superfund site, and began a cleanup. Around that time, her family endured a spate of health problems — her son developed a rare blood disorder, her husband was diagnosed with asthma, and she developed Tourette’s syndrome and migraines.

Petrucci blamed dust from the Superfund site for their health problems. (The EPA says dust levels at the site never endangered human health.) She worries about the oil and gas infrastructure that ring her property, and isn’t happy about PTT’s proposed ethane cracker a mile from her house.

“I think we’re going to get hit with more toxic air. How many more layers can we throw on everybody in the community?” Petrucci said.

She says she’s been thinking about moving somewhere where the air and water are clean, and there’s no oil and gas. But she hasn’t found anywhere that fits that bill just yet.

So it was welcome news for her when she heard PTT was delaying a final decision on its ethane cracker.

“I (felt) like I could kind of just hang out here for a little bit longer and enjoy life here,” she said. “I feel relieved and feel like I can enjoy my property a little more.”