A tanker train crosses the Susquehanna River in Pennsylvania. A proposed new rule that would allow liquefied natural gas to be transported by rail is being challenged because safety and risk assessments have not been done.

No ‘bomb trains’: 14 states aim to take new rule on LNG transport off the rails 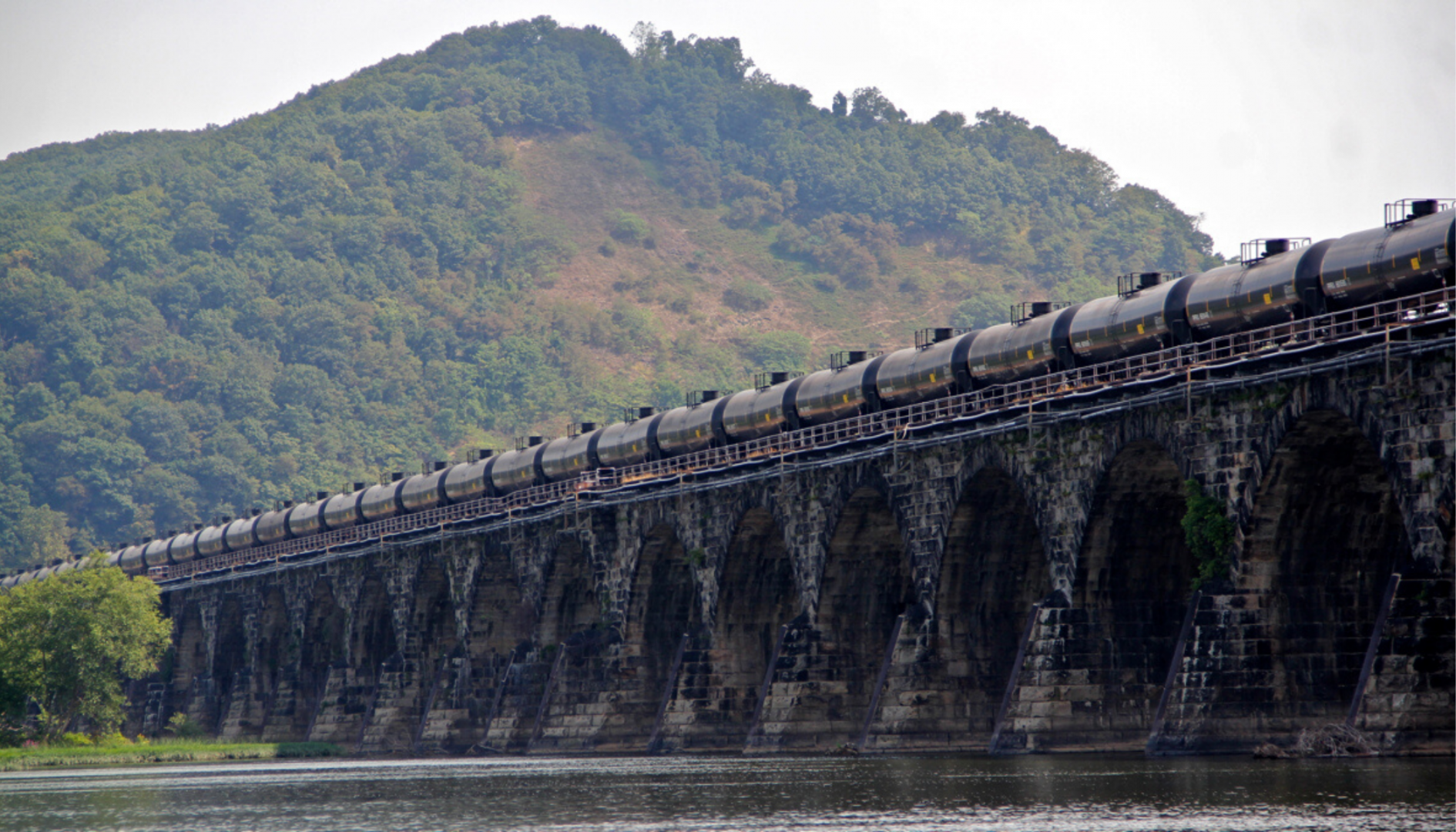 A tanker train crosses the Susquehanna River in Pennsylvania. A proposed new rule that would allow liquefied natural gas to be transported by rail is being challenged because safety and risk assessments have not been done.

Fourteen states — including Pennsylvania, New Jersey and Delaware — and the District of Columbia have filed a legal challenge to a new federal rule that would allow trains to carry liquefied natural gas (LNG) across the country.

The states’ move coincides with a petition filed by environmental organizations that also hope to block the rule, which was approved in late July by the Pipeline and Hazardous Materials Safety Administration. Both petitions say the rule, set to take effect Monday, Aug. 24, should be overturned because it poses health, safety, and environmental risks.

For Pennsylvania and New Jersey, the rule could prove to be particularly important. That’s because an LNG terminal in Gibbstown, New Jersey, for which approval is pending would use rail cars to carry liquefied natural gas from Wyalusing in northeastern Pennsylvania to a Delaware River port in Gloucester County.

Federal safety and environmental studies on the impact of LNG rail transport — the kind that are typically carried out before the implementation of new regulations — have not yet been conducted.

Given that, she said, the Gibbstown route would mean “everybody exposed along the railways are put in the position of guinea pigs … [They] would be part of a big experiment that could potentially cost them their lives.”

The petition filed by the states does not lay out the full legal argument in its text, but a release from California Attorney General Xavier Becerra’s office said that the coalition plans to argue that “PHMSA’s failure to evaluate the environmental impacts of the rule is unlawful … the rule lacks the necessary safety requirements to minimize the risk to public safety associated with transporting LNG by rail.”

The Admin has fast-tracked a plan to haul explosive liquefied natural gas by train through communities nationwide.

Without adequate safety and environmental studies.

We're fighting back to protect our residents. pic.twitter.com/CVuXYfQlc7

In a statement, Pennsylvania Attorney Josh Shapiro said, “Liquefied natural gas has almost never been allowed on rail cars in bulk, because it’s extremely dangerous — it’s explosive! Look, there are laws on the books to ensure safety, and the Trump administration must follow them.”

Under current federal law, it’s considered too dangerous to transport liquefied natural gas in regular tank railcars. LNG can be transported only by truck or — with special approval by the Federal Railroad Administration — by rail in small United Nations tanks mounted on top of railcars. That would change when the new rule takes effect.

In January, the same attorneys general voiced “strong objection” to the proposed change. But the Pipeline and Hazardous Materials Safety Administration chose to approve it July 24, authorizing bulk shipments of LNG by rail provided the transporting cars had certain enhanced outer tank requirements.

That wasn’t enough for the states or the environmental groups, which include the New Jersey Chapter of the Sierra Club, the Clean Air Council in Philadelphia, and the Delaware Riverkeeper Network. Their petitions, filed Aug. 18, ask the U.S. Court of Appeals for the D.C. Circuit to find PHMSA’s rule unlawful under the Administrative Procedure Act, the Hazardous Materials Transportation Act, and the National Environmental Policy Act.

Representatives from the Standards and Rulemaking Division of the Pipeline and Hazardous Materials Safety Administration did not immediately respond to a request for comment on the legal challenges.

The petitions are not without precedent. After the derailment and explosion of crude oil trains in Quebec and North Dakota in 2013, as well as multiple incidents involving crude oil trains in Pennsylvania, advocates urged more stringent safety standards around rail transportation of hazardous and potentially explosive materials, both locally and nationwide. Some of those implemented regulations took effect as recently as 2019.

But the Delaware Riverkeeper Network’s Carluccio and other environmental advocates are worried that LNG — which can simultaneously combust and explode into vapor more than 600 times its volume — poses an unprecedented level of risk that far surpasses a crude oil shipment.

“We’re not talking about the usual hazardous material that are unfortunately [carried] every day across the nation’s railways,” she said. “We’re talking about a new breed of danger, danger that we’ve never faced before.”