Has the pandemic cleaned up our air? Answers could lie on your doorstep | StateImpact Pennsylvania Skip Navigation

Signs posted along Philadelphia's Schuylkill River Trail caution users to keep six feet away from others to prevent the spread of COVID-19. 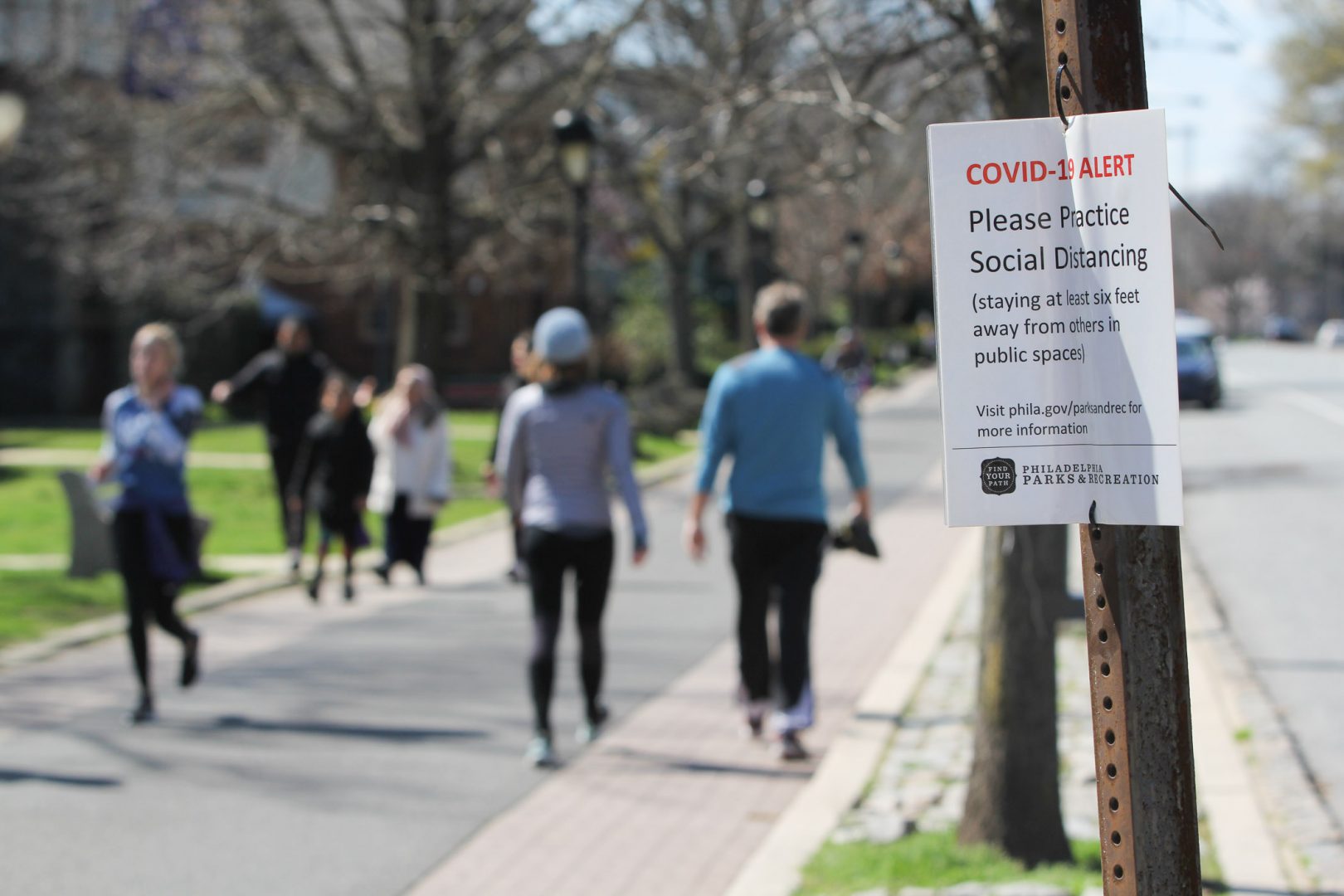 Signs posted along Philadelphia's Schuylkill River Trail caution users to keep six feet away from others to prevent the spread of COVID-19.

Shari Hersh grew up in Philadelphia, hiking in Fairmount Park, biking along the Schuylkill River. She commutes to her job at Philadelphia Mural Arts by bike, and each day of the coronavirus shutdown she has either walked or biked the city’s streets.

She’s noticed a significant change in the air.

“Totally clear, it’s so gorgeous,” said Hersh, who’s lived in the city for decades. “I don’t remember it being clear like this day after day in my whole lifetime. You know how sometimes we have a high-pressure day, and it’s really clear, it’s like if it’s rained the night before and there’s no particulates, it’s like it’s washed it all away. But not day after day.”

A lot of people are talking about air quality these days, saying the sky looks bluer, the air smells fresher — there’s just something different about it.

Springtime and the COVID-19 shutdown began simultaneously, creating a pivotal moment for air quality and the scientists who study air pollution. While the coronavirus raged through cities and across the country, air quality researchers were granted the gift of a natural experiment, one that would be very difficult to replicate.

In some ways, though, that has happened with this shutdown. There’s data on traffic patterns, gasoline usage, power plant air emissions, dates of industrial plant shutdowns and satellite data that measures nitrogen dioxide, along with the current network of air monitors that continue to calibrate pollutants on a daily basis.

The question is, how has the shutdown affected air quality, and what is the impact on public health?

“I think these kinds of explorations, not only in this area, but across the world, are going to be things that we’ll be seeing in the peer-reviewed literature for several years to come,” DeCarlo said.

The changes don’t seem that significant

The Environmental Protection Agency keeps track of both ground-level ozone, or smog, and particulate matter, specifically PM 2.5. They are regulated air pollutants caused by the burning of fossil fuels from power plants and cars, as well as industrial sites like chemical plants and refineries. The data can be compared year to year.

For the Philadelphia region, which includes Wilmington, Delaware, and Camden, New Jersey, the changes haven’t been that significant, according to Lelia Hawkins, a chemistry professor at Harvey Mudd College near Los Angeles, where she researches air quality and climate change.

“In terms of ozone, I would say this year’s data looks like they’re maybe a little bit lower than previous years through March and early April, and then right now, it looks like it’s on par with the previous years,” Hawkins said.

There’s definitely been a decrease in rush-hour traffic in Philadelphia itself during the shutdown. But industrial pollution from refineries or chemical plants will increase ground-level ozone, and not all of those industrial activities have come to a halt.

It looks like for ozone, at least, it’s fairly typical for this time of year in the city.

Are we just imagining cleaner air? Or do we really notice such small changes?

“And so while we might not know that the air is cleaner, our bodies actually might, actually might feel that, that difference in ways that we can’t really perceive,” DeCarlo said.

There’s a clear link between increases in air pollution and poor health, he said.

Particulate matter refers to tiny particles that can get stuck in your lungs. They come from all kinds of things — cars, trucks, buses, power plants, and even cooking. Ground-level ozone and particulate matter worsen respiratory ailments such as asthma, emphysema and bronchitis. Preliminary studies have shown higher death rates for COVID-19 among patients who live in highly polluted cities.

High levels of particulate matter create haze, and that changes how we see the horizon. Weather, too, plays a huge part in determining air quality from day to day. In fact, air quality in the spring and fall is always better than in winter and summer. So, much of the difference we’re noticing lately could be due to seasonal variations.

Hawkins said it’s very difficult to separate the weather variables from the impact of the shutdown.

“I would say in Los Angeles, what I saw from the month of March is it’s definitely cleaner than the previous Marches, and it’s not just due to weather,” Hawkins said.

In the Philadelphia region, EPA data shows that particulate matter pollution is lower than normal for this time of year.

In addition to fewer cars on the road, there’s been a significant drop in electricity usage. PJM Interconnection, which runs the power grid for a 13-state region that includes Pennsylvania, New Jersey and Delaware, reports about an 8% drop in electricity consumption. As a result, coal, the most expensive and dirtiest fuel, dropped to just 16% of electricity production in March 2020. A year ago in March, coal produced more than a quarter of the region’s power.

As a result, carbon dioxide emissions from power plants in the PJM area dropped about 23% for March 2020 compared to March 2019. Though the drop in CO2 is not enough to make a dent in total atmospheric carbon that causes climate change, significant drops in other air pollutants could contribute to cleaner air.

For the same time period, power plant emissions of nitrogen dioxide dropped about 40%, while sulfur dioxide decreased by 60%. 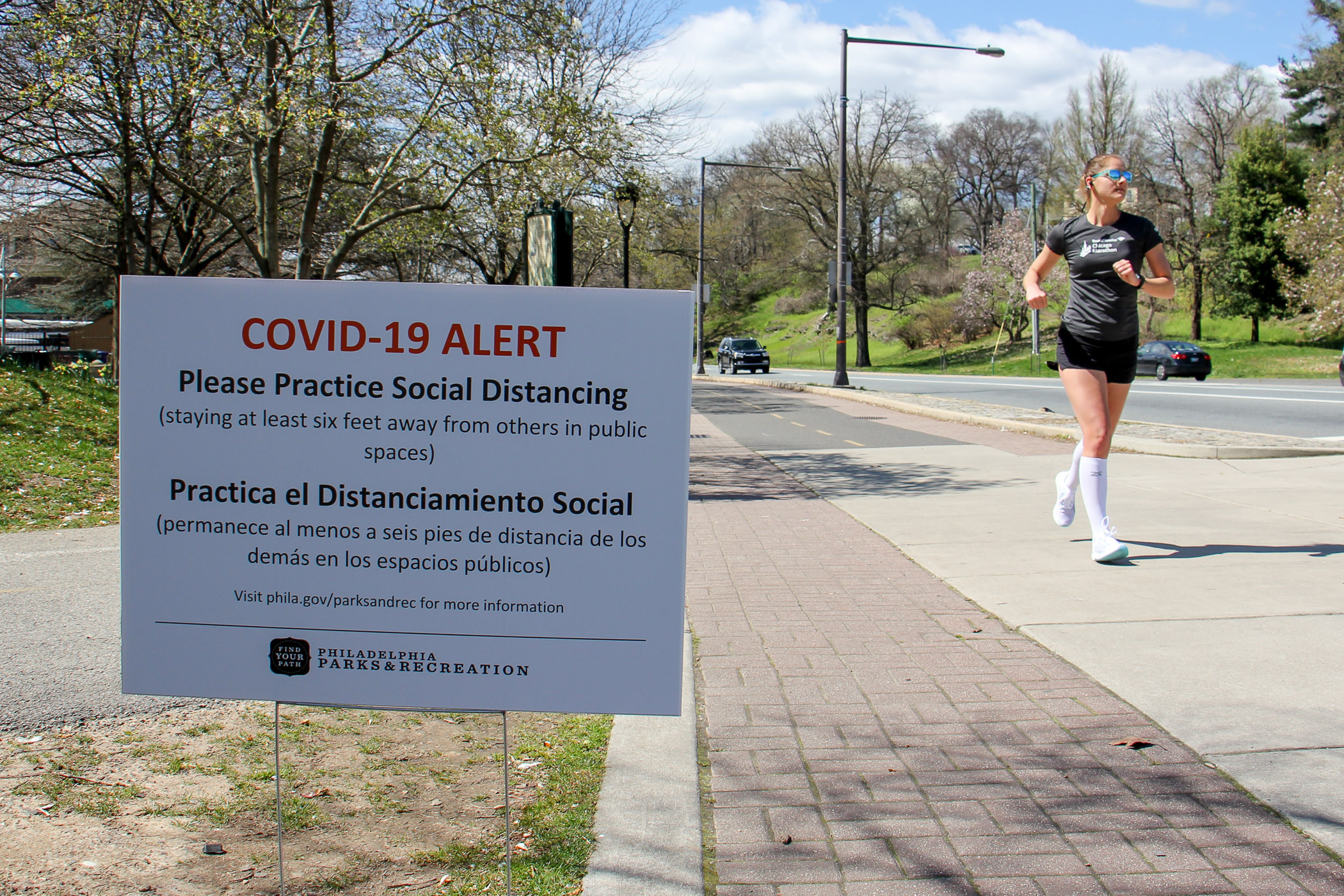 Signs posted along Philadelphia’s Schuylkill River Trail caution users to keep six feet away from others to prevent the spread of COVID-19.

Hersh’s neighbor Joe Huelskamp has lived in the same house for decades, and he’s also noticed a change in the air since the shutdown.

“It just feels nice, that’s the only way I can explain it,” Huelskamp said. “I can feel it right now with the cooler temperature today. Traffic is light, I go out shopping on the weekdays, and I’m seeing very little cars on the Expressway, on I-95. There’s buses being cut down, we had three buses coming up our street, the 7, the 32 and the 48, and they’re only running the 7 Bus.”

It could make a huge difference to the air quality on that street, Hawkins said.

“Yes, that would have a major effect because just taking one street over from the major bus path can really change your exposure to these primary pollutants,” she said.

Although EPA data shows some decreases in pollution for this large metropolitan area, it’s not capturing the dramatic changes some Philadelphians are talking about. But the data also is not measuring hyper-local differences like the pollutants from diesel buses that run up and down specific streets. So what Huelskamp said he notices about this spring could just be due to fewer buses burning diesel right outside his front door.

Hawkins said some blocks, even neighborhoods, could be relatively cleaner.

“For me, the natural experiment is really interesting because it’s going to help us answer questions around the extent to which various activities contribute to air quality,” she said.

Like a lot of scientists these days, Hawkins is not allowed to go into her lab, but she can monitor data from home. And she’s excited about what she’s seeing.

“When you poke the system and you watch how it responds, you can learn a lot, so I think there are certainly important discoveries that will be made when we see how long this lasts,” she said.

It will be some time, though, before scientists can come to a conclusion on how this natural experiment has affected public health.

In Pittsburgh, a city known for its poor air quality, researchers were disappointed by the results of the shutdown.

“When the shutdowns happened in China and Italy, we saw this miraculously clear air,” said Albert Presto, associate research professor in the Department of Mechanical Engineering at Carnegie Mellon University. “We don’t see the same sort of improvement that other parts of the world are seeing. At best, we can see a 10% or less improvement, and that level of change is within seasonal variability.”

Presto said it could be that much of Pittsburgh’s pollutants come from industry, like steel and coke plants, and that those operations could have been deemed “essential” and not shut down.

Another good piece of the puzzle to watch is what happens as things start to open back up.

DeCarlo said he worries air quality could actually get worse.

“I think right now we’re seeing a huge reduction in passenger vehicle traffic. But what’s going to happen when people start going back to work and going back to school and are maybe afraid of taking public transportation?” DeCarlo asked. “Are we going to not only get back to the levels we were at, but actually exceed those in terms of passenger vehicle traffic because people don’t want to be in those shared spaces?”

DeCarlo hopes that’s something local governments will consider when planning to reopen.