Veronica Coptis, of the Center for Coalfield Justice, speaks at a town hall in Millvale, Pa. on the growth of the petrochemical industry. 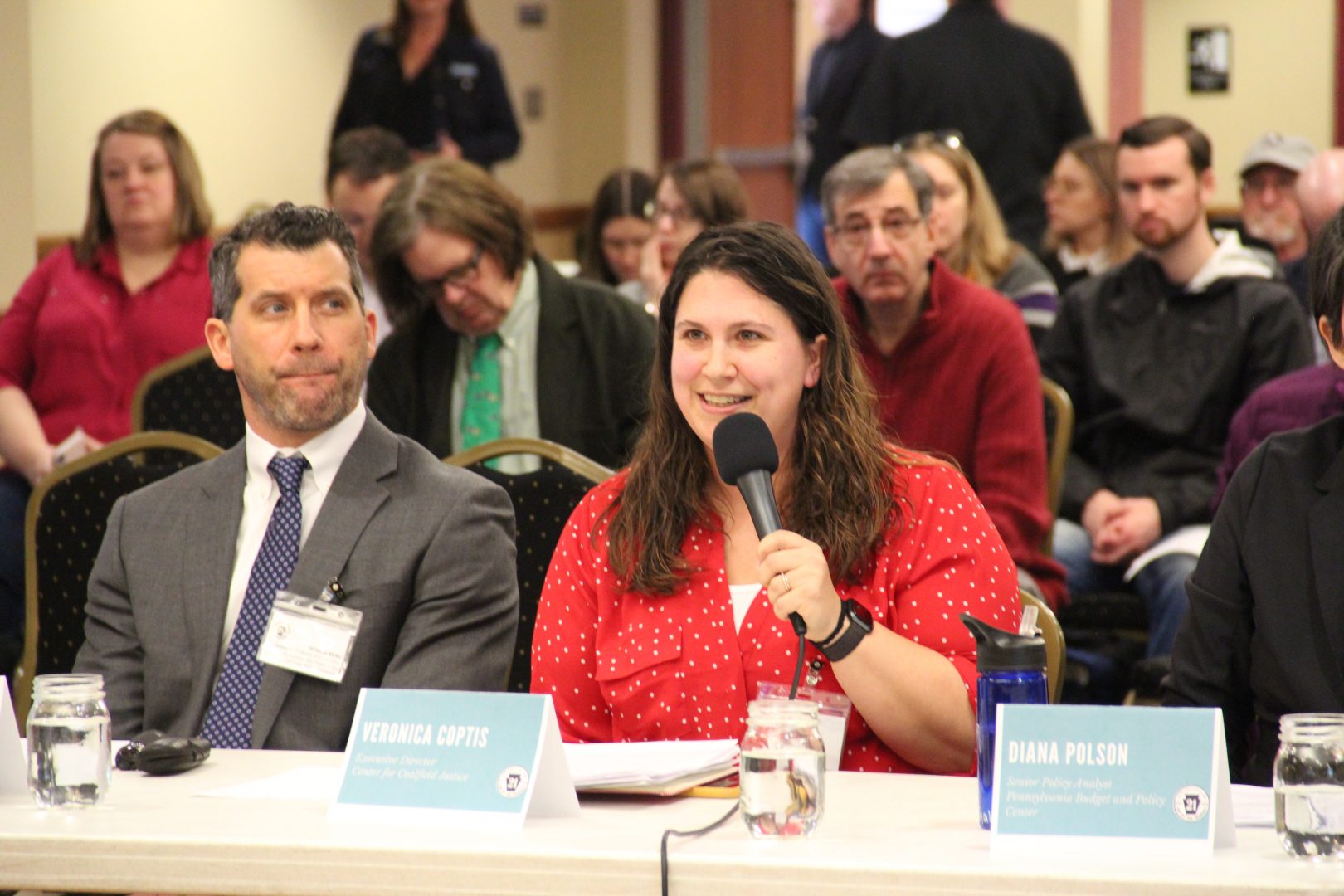 Veronica Coptis, of the Center for Coalfield Justice, speaks at a town hall in Millvale, Pa. on the growth of the petrochemical industry.

Subsidies for the petrochemical industry may bring a boost in construction jobs but could have a negative effect on Pennsylvania’s air quality and public health, according to speakers at a town hall held near Pittsburgh Wednesday.

The panel was put together by state Rep. Sara Innamorato, a Democrat from Pittsburgh. Innamorato voted against HB 1100, which passed the House and Senate last month, and would give millions of dollars in tax breaks for companies to build new chemical plants using natural gas from Pennsylvania.

“We can be against corporate giveaways like HB 1100 and also be for good union jobs, family-sustaining jobs,” Innamorato said.

The House and Senate passed HB 1100 with veto-proof majorities in February. Gov. Wolf has vowed to veto the bill, but it has yet to arrive at his desk.

Innamorato said she held the forum for the public to hear from people other than just business and trade unions that would benefit from the law.

“Those include impacted residents that live outside of Allegheny County, those include economists that have been studying this issue. It includes medical professionals who know what the public health impacts can be,” she said. “It’s a dialogue that we’re going to have. This is the first conversation that our office facilitated with the public, and it’s not going to be the last.”

Shell is building a multi-billion dollar petrochemical plant in Beaver County to turn the region’s ethane, a natural gas byproduct, into plastic. That plant is the beneficiary of a $1.65 billion state tax break. ExxonMobil may be looking to build another plant in the region, according to recent reports.

Among the speakers was Nick Muller, a Carnegie Mellon economist who presented research showing the shale gas industry, which would supply the state’s petrochemical plants, has cost the region more in health costs and premature deaths than the economic boost of jobs created by the industry.

The study, published last year in the journal Nature Sustainability, found that between 2004 and 2016, shale development created a regional economic boost of $21 billion, compared with $23 billion in the costs related to the 1,200 to 4,600 premature deaths linked to air pollution from the industry.

When that study was released, Marcellus Shale Coalition president David Spigelmyer said there are impacts and tradeoffs associated with all energy sources, and said “…natural gas is unquestionably enhancing our environment and air quality, boosting job creation and making American more secure.”

But Laura Dagley, a nurse and medical advocacy coordinator for Physicians for Social Responsibility, said the region’s air quality is already bad, and that the plant will be adding emissions, not just at the plant itself but in the production of oil and gas. The emissions include small particles and volatile organic compounds, like benzene and formaldehyde.

One unscripted moment spotlighted the difficult relationship between those raising environmental concerns about the fossil fuel industry and organized labor.

In attendance at the town hall was Darrin Kelly, president of the Allegheny/Fayette Central Labor Council, AFL-CIO, but Kelly left the hearing about a half-hour into it. A spokesman for the labor council later said that Kelly left because one of the speakers in attendance was Danielle Friel Otten, a Democratic Chester County state representative who won her seat in 2018 on a platform of opposition to the Mariner East pipeline project, which has had problems with spills and groundwater contamination.

In May 2019, Friel Otten took criticism from unions for a social media post comparing the actions of pipeline workers to those of Nazi soldiers. The incident occurred after a protest stopped work on the pipeline. A pro-pipeline group tweeted that protesters were preventing workers from doing their jobs. In a now-deleted tweet, Friel Otten responded that “The Nazis were just doing their jobs too,” and linked a PBS article on coercion by people in power.

Friel Otten, in an email, did not directly address Kelly’s walkout. “I was at the hearing representing the concerns and interests of my constituents, who are dealing every single day with the negative impacts of the expansion of the petrochemical industry in Pennsylvania,” she said.

But the incident stuck with Kelly, and he told people he couldn’t “share a room” with someone who had spoken of union members like that, said Coleman Lamb, a labor council spokesman.

Innamorato said she had a good relationship with Kelly and that he was “committed to having this conversation” about the benefits and drawbacks of petrochemical expansion in Pennsylvania. Asked about the Friel Otten tweet, she said “I wouldn’t invoke that language,” but said that for Friel Otten, who lives near the Mariner East, the issue of the pipeline was personal. “When you’re fighting for your kids, for your family…these are peoples’ livelihoods and peoples’ lives. That’s when passion and tension exist. It’s going to be there.”