Scotland is turning Pennsylvania shale gas into plastic. But what happens to it next? | StateImpact Pennsylvania Skip Navigation 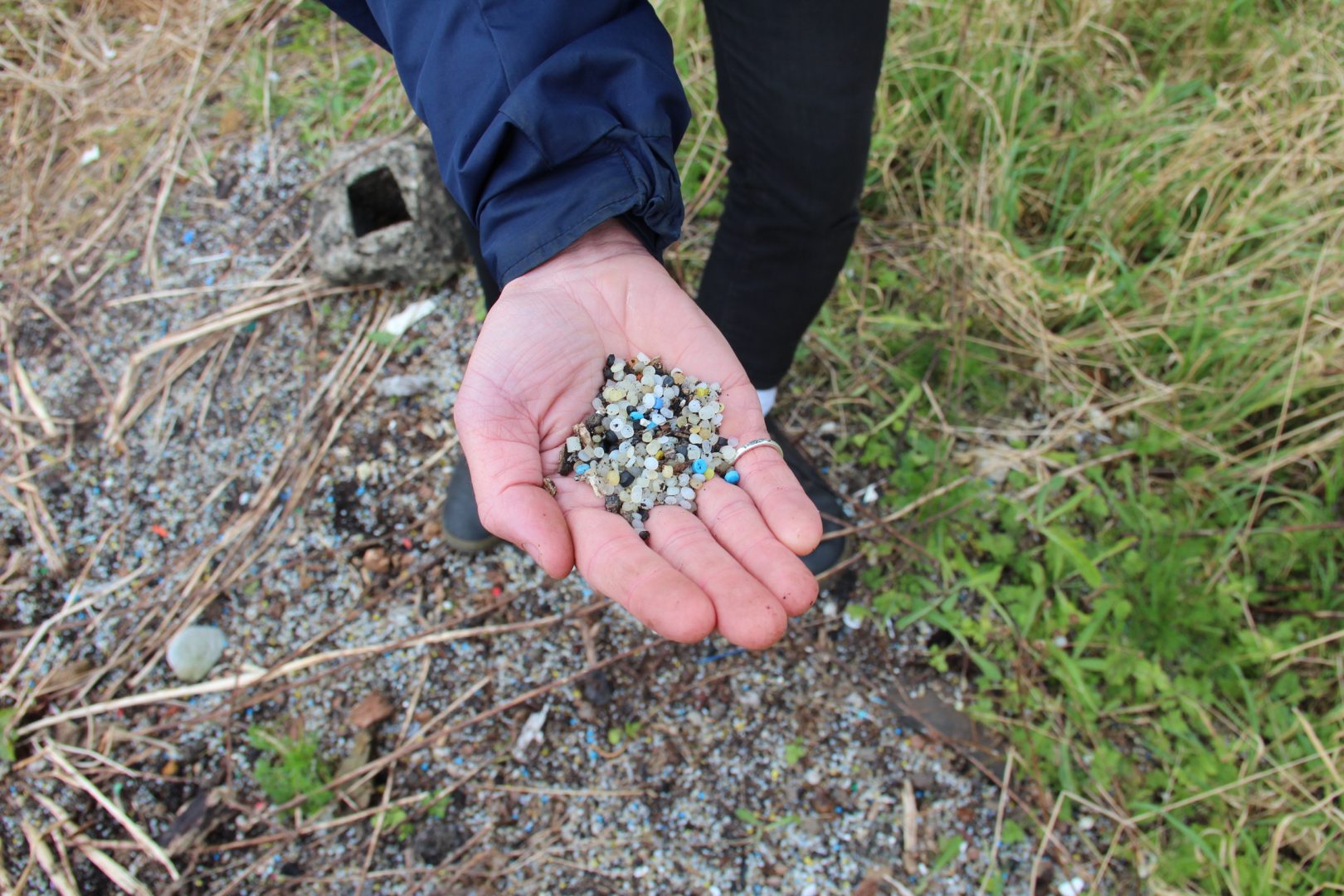 It’s a windy day on the Firth of Forth, a wide river estuary in central Scotland, and Jasper Hamlet is jabbing at the sand on Ferrycraigs Beach with a stick. He peels back layers of sand, dried seaweed, and sticks, and finds what he’s looking for: plastic pellets called “nurdles.”

“This is a wall of plastic pellets here,” he says, poking into a strip of sand riddled with the plastic beads.

“You can see that it’s very much part of the ecosystem. If you dig down into the soil, the nurdles are layered.”

There are thousands of these lentil-sized pellets buried in the sand here. These nurdles — which are used in plastics manufacturing — are all different colors: black, yellow, blue. Some have the dull yellow hue of plastic that’s decades old. 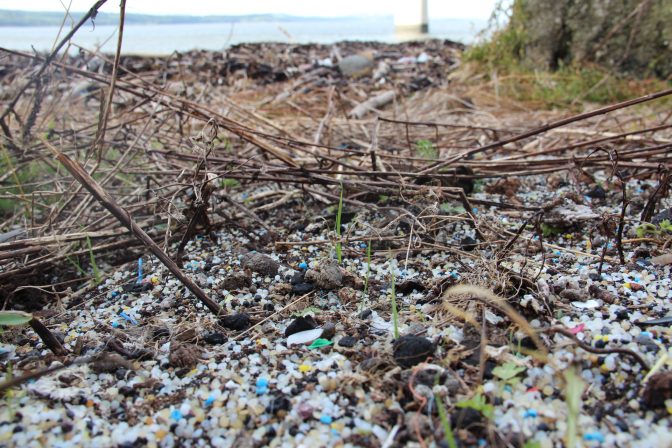 Hamlet works for the environmental group Fidra – named after a nearby island in the Firth of Forth, which is prone to pollution from nearby industry.

The largest producer of these pellets is a petrochemical plant at the head of the Firth in the town of Grangemouth. The plant, owned by the European chemical company INEOS, makes pellets out of ethane, a byproduct of natural gas drilling. Since 2016, the Grangemouth plant has been making nurdles using ethane it ships in from Western Pennsylvania.

The nurdles are melted down by other companies and can be molded into plastic bags, bottles, or thousands of other materials.

Nurdles are a part of what advocates say is a global crisis of plastic pollution clogging oceans and putting plastic into the foodchain. There are 150 million metric tons of plastic in the world’s oceans.

And millions of tons more enter the ocean every year. 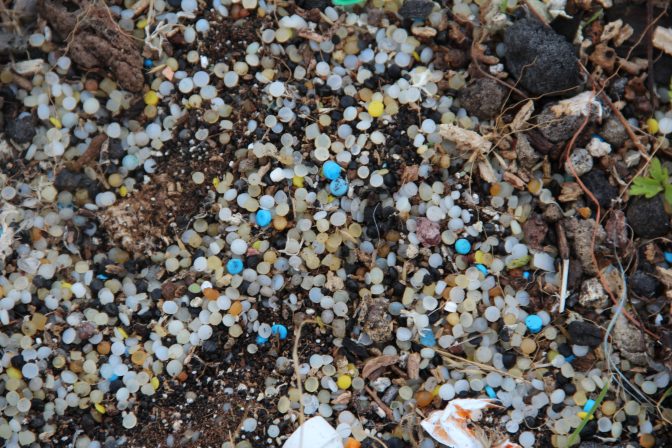 Hamlet says this plastic can kill wildlife–seabirds and mammals that eat it can starve because the plastic never breaks down in their stomachs. The plastic also absorbs harmful bacteria and environmental toxins like PCBs. A recent study found 45 percent of Scottish nurdles carried the disease-causing bacteria E-coli. One study estimated that between 5 and 53 billion nurdles are lost each year in the UK.

Fidra has organized several beach cleans at Ferrycraigs, but it’s barely made a dent. The group has taken two million pellets away–but the sand is still littered with them.

Hamlet says beach cleans aren’t enough–the solution is keeping nurdles and other plastics out of the ocean in the first place.

Scotland is one of more than a half dozen countries importing shale gas from the U.S. to make plastic. But unlike the U.S., where laws governing plastic are confined to a select group of cities and states, Scotland is following a more aggressive approach, including a tax on plastic bags and a ban on some single-use plastics.

One person looking for a solution to plastic pollution is Iain Mitchell. Mitchell runs John Mitchell Haulage, his family’s trucking company, in Grangemouth. His company hauls plastic pellets from the INEOS plastics plant to various producers. 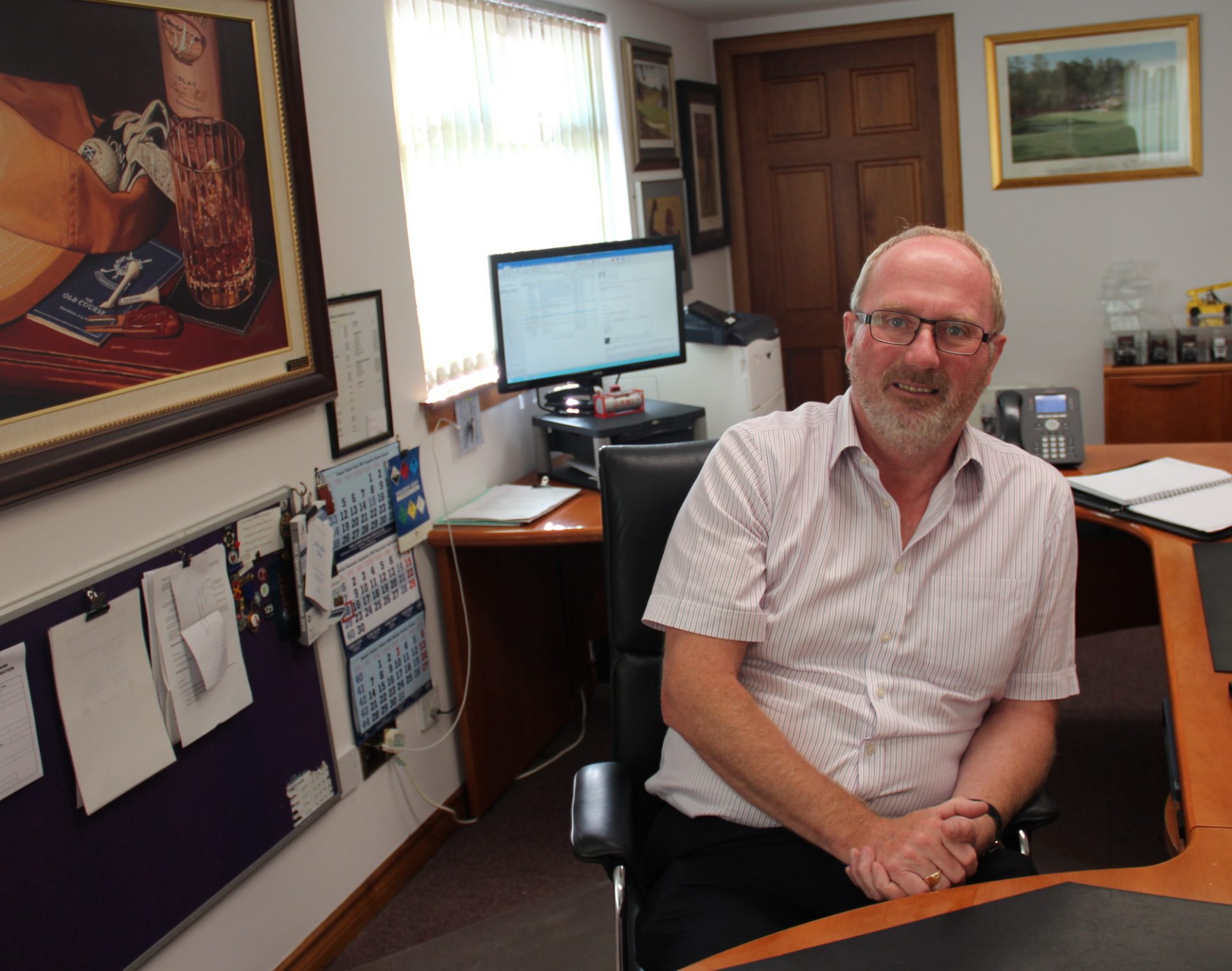 A few years ago, Mitchell got involved in Operation Clean Sweep, a voluntary effort to reduce plastic pollution.

His drivers are required to report and clean up any spillage of plastic pellets.

“We will have spillages. I will not sit in front of anybody and say it will never happen,” Mitchell says. “But what I will say is, the very few times that it does happen we will clean it up.”

At his company depot, in an industrial park in Grangemouth, Mitchell installed a new storm drain system to capture spilled nurdles. The system cost over a million dollars to install, and involves pipes that function much like a U-bend inside a toilet or beneath a sink. The buoyant plastic pellets can’t get past the the U-bend, Mitchell says.

“There’s nothing that we are doing here that’s not Wal-Mart-type civil engineering,” he says.

Mitchell lives in Grangemouth, near the plant that’s produced plastics for decades. He says he’s been motivated by seeing nurdles pile up on nearby beaches. “It’s a personal view that we must stop these pellets from getting into the watercourses,” Mitchell says.

The Grangemouth plant is owned by the European chemical company INEOS, which didn’t agree to an interview for this story. But the company says it’s altered operations to prevent pellet loss. The plant has installed special equipment to remove stray pellets from empty containers and mesh filters in its drainage system to catch nurdles before they escape the plant.

While the industry tries to make plastic production cleaner, others are trying to reduce the need for plastic by using less of it.

In early 2019, Kelly Wright opened the Refillery, a plastic-free store in Edinburgh. Wright worked for 20 years in the grocery industry, where she saw firsthand how hard it was for retailers to quit plastic packaging.

“I spent 20 years…dealing with all of the major retailers in the UK, and I quickly came to understand they were not going to solve this plastic problem for us,” she says. “Their infrastructures are just too tied up with plastic. It will take them years to unravel it.” 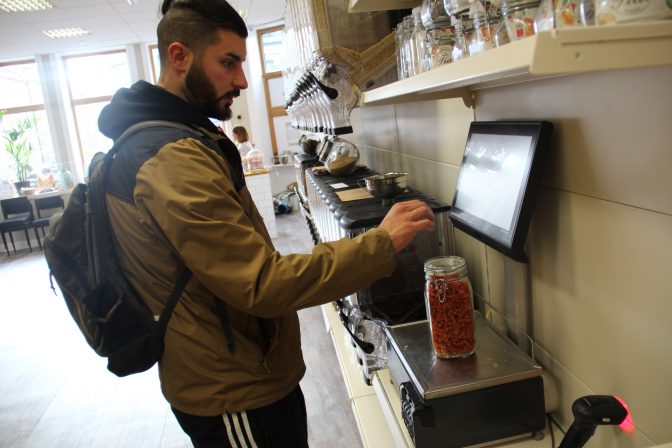 Marcos Navarro weighs dry pasta at the Refillery, a plastics-free store in Edinburgh.

So Wright opened the Refillery as a way to make a new type of grocery infrastructure, though it looks more like an old-fashioned general store than something out of this century. “We call it ‘Back to the future,’” she says.

You can buy bars of shampoo, jars of toothpaste, and bamboo toothbrushes.

Louise Matthews said she shops in the store as a way to reduce her own plastic footprint. She says she’s been motivated by popular TV shows like David Attenborough’s ‘Blue Planet’ series, which exposed millions of Britons to plastic’s impacts on ocean life, as well as seeing plastic pile up on the streets of Edinburgh.

“So I started looking around my home and just looking around the bathroom and suddenly realising that you’re not looking at the products–everything’s in packaging,” says Matthews.

Wright says people are already carrying their own water bottles and reusable coffee mugs to cut down on waste. Carrying a reusable container to the store to pick up pasta is just one step further, she says.

“So it’s not such a step too far to think, well, actually, I’ll bring my own container into a place and then fill it up.”

But voluntary programs and plastic-free stores alone won’t keep plastics out of the oceans, advocates say. One example: plastic stemmed-cotton buds, which Americans call by the trade name ‘Q-tips’.

These sticks are often flushed down toilets, and end up in the ocean, where animals sometimes ingest them, says Clare Cavers, Fidra’s senior project manager.

“They’ve actually pierced the intestine and caused the death of turtles. So, you know, it’s a very real issue. It’s not just something that doesn’t look nice,” Cavers says.

“They’ve been campaigning for 20 years to stop people from flushing them down the toilet, because that’s how they got to the beaches, and …nothing. No change in 20 years,” Cavers says.

The effort is in keeping with a movement in the rest of the UK and European Union to restrict the kinds of plastics companies can sell to consumers. The EU, for instance, has approved a single-use plastic ban by 2021, which will apply to items like plastic cutlery, polystyrene cups, and straws.

Scotland passed a plastic bag tax in 2014 of five pence, or six cents per bag. The tax led to an 80 percent decline in plastic bag use in its first year.

Calum Duncan of the Marine Conservation Society says there was also a 40 percent dropoff in plastic bags found on local beaches after the ban. This has real impacts on the country’s marine wildlife, Duncan says.

“There was a Cuvier’s beaked whale–a rare, deep-diving whale–washed up in {the Scottish Isle of} Mull that had rolls of black plastic bags in the stomach.” he says. 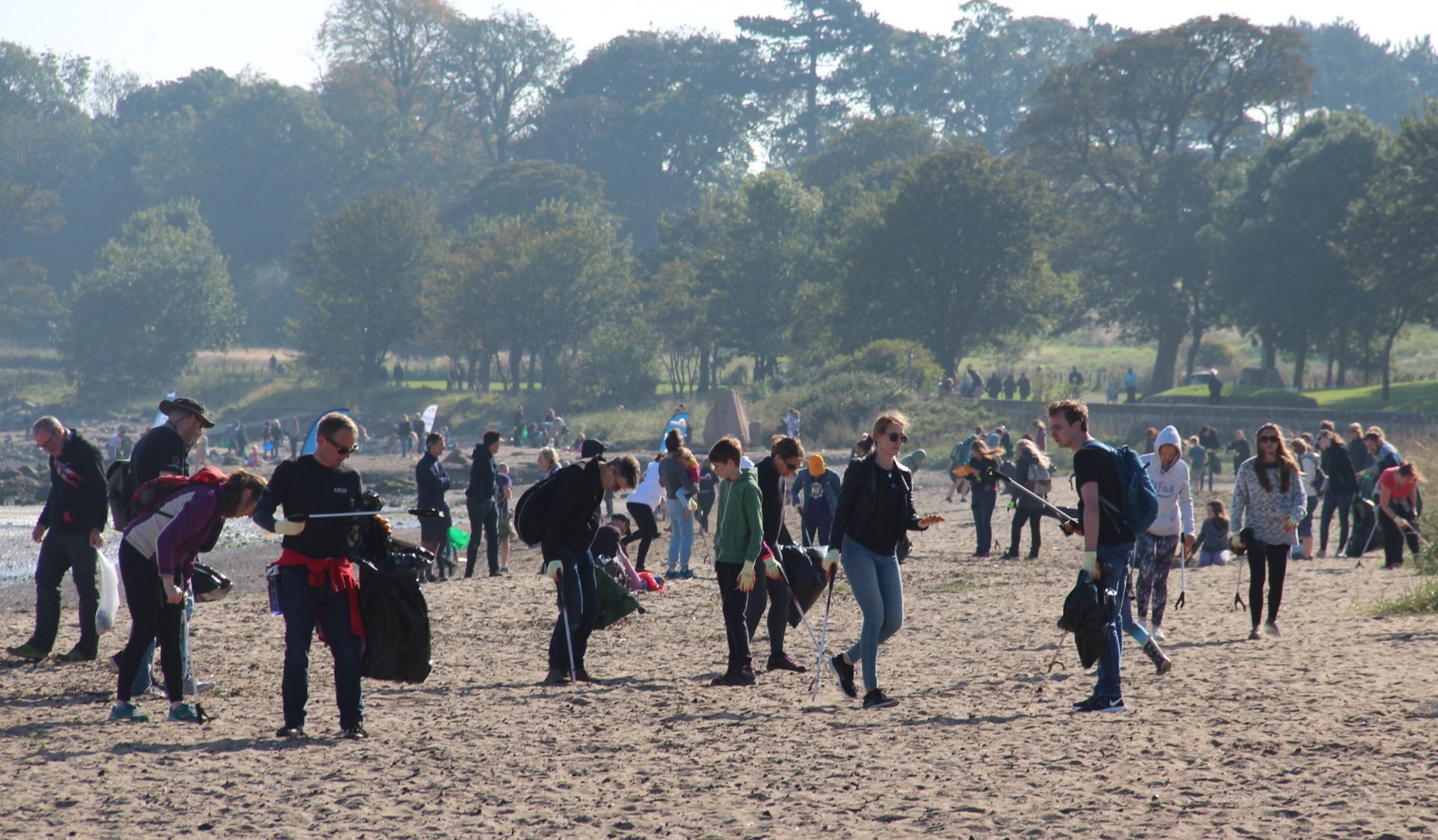 On a sunny but windy day at Cramond Beach in Edinburgh, Melisa Pinardi took part in one of these cleanups with her friend, Ana Moreno.

Moreno recorded each individual piece of trash — bottle caps, flushable wipes, and cotton buds–on her clipboard while Pinardi called them out.

Moreno — a native of Mexico who now lives in Scotland — said plastic in the ocean is an increasingly popular cause in the UK.

“Especially lately with all the news and all the ads you get on facebook and instagram, on (the) media, it’s just impossible to stay immune to it,” Moreno says.

Moreno said she’s trying to go as plastic-free as possible. But these days, that’s not always easy to do.