Sen. Pat Toomey speaks in Harrisburg on Nov. 8, 2019. He sponsored a bill aimed at barring future presidents from banning fracking. 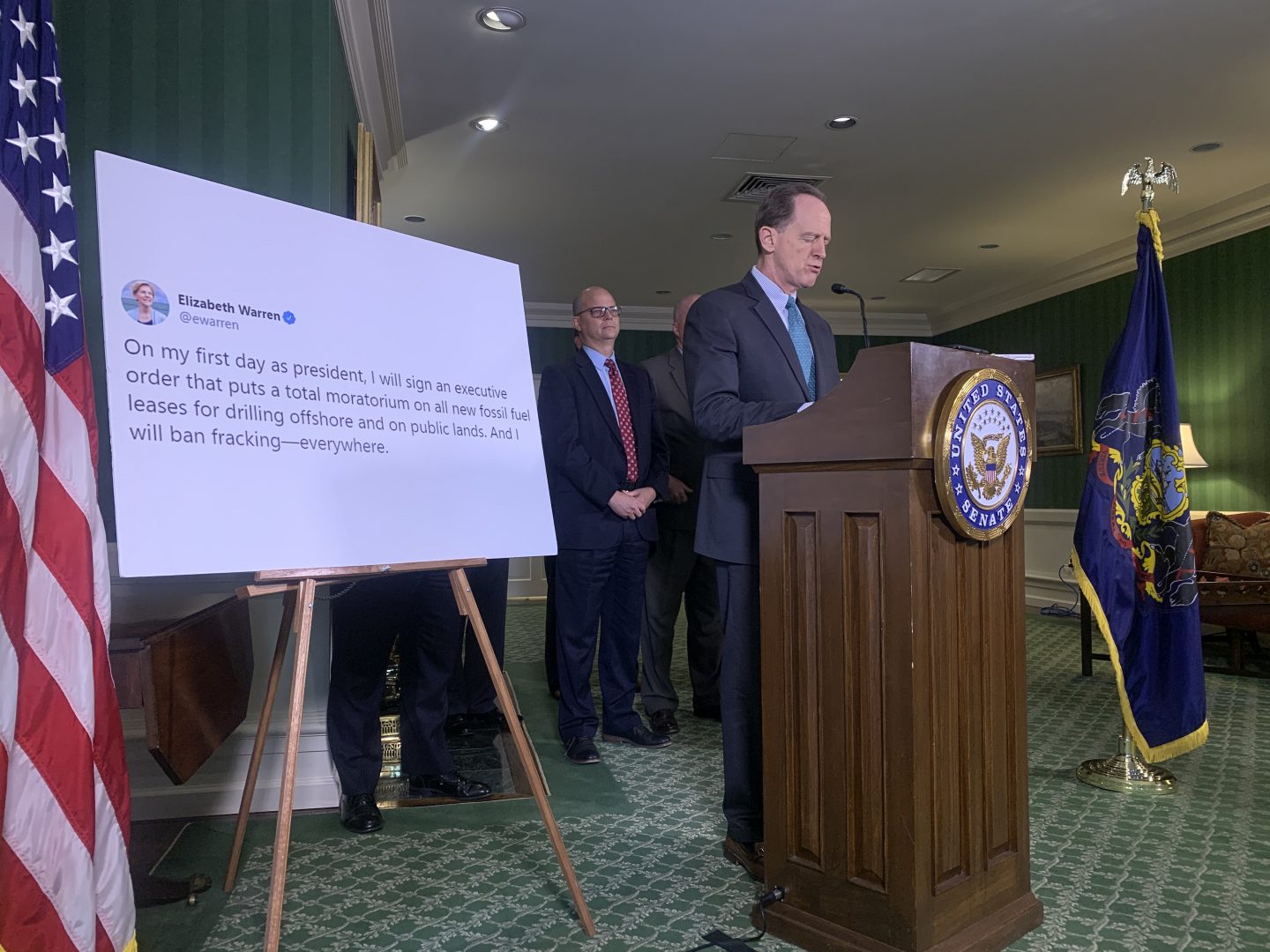 Sen. Pat Toomey speaks in Harrisburg on Nov. 8, 2019. He sponsored a bill aimed at barring future presidents from banning fracking.

(Harrisburg) — Pennsylvania’s Republican U.S. Senator, Pat Toomey, is trying to head off some of the big environmental promises ​that a few Democratic Presidential candidates are making.

Toomey announced the measure in Harrisburg Friday, standing next to a poster-sized tweet from Massachusetts Senator Elizabeth Warren.

She and other leading candidates, like Vermont Senator Bernie Sanders, say if elected they’ll impose ​a total fracking ban in the name of meeting ambitious greenhouse gas reduction goals. In addition, Sanders, on his campaign website, says his plan to ban fracking is because it makes “surrounding communities less healthy and less safe.” ​Drilling for shale gas is a major industry in western and north-central Pennsylvania.

“I fear they might declare a national emergency of some sort and pretend that that gives them the authority to do this,” Toomey said. “I don’t believe for a minute that it does.”

Toomey said his proposal doesn’t exactly prohibit future presidents from banning fracking—it’s intended to set a precedent that Congress can use to challenge a ban in court.

He said his concerns about a potential ban ​to a major Pennsylvania industry have grown in recent months.

“Now we have the leading Democratic presidential candidates competing with each other over who can be most hostile—hostile—to this tremendous source of economic renaissance,” he said.

Axios reported Friday on a poll by the Kaiser Family Foundation and Cook Political Report that showed lukewarm support for a fracking ban in several battleground states.

Researchers asked people in Pennsylvania, Michigan, Wisconsin and Minnesota — key states in the 2020 presidential election — whether they thought a fracking ban was a good idea. Support for a ban was between 50 and 56 percent among Democrats, but between 39 and 42 percent among “swing voters,” which the pollsters defined as those who don’t know who they’ll vote for, or are leaning toward a candidate but aren’t sure. The poll’s margin of error was 4 percent for Democrats and 3 percent for swing voters.

Toomey is also backing a bill that would amend the Clean Water Act to keep governors—like New York Democrat Andrew Cuomo—from using one of its provisions to block interstate pipelines.

He conceded that neither is likely to get brought up in the Democratic-controlled House.