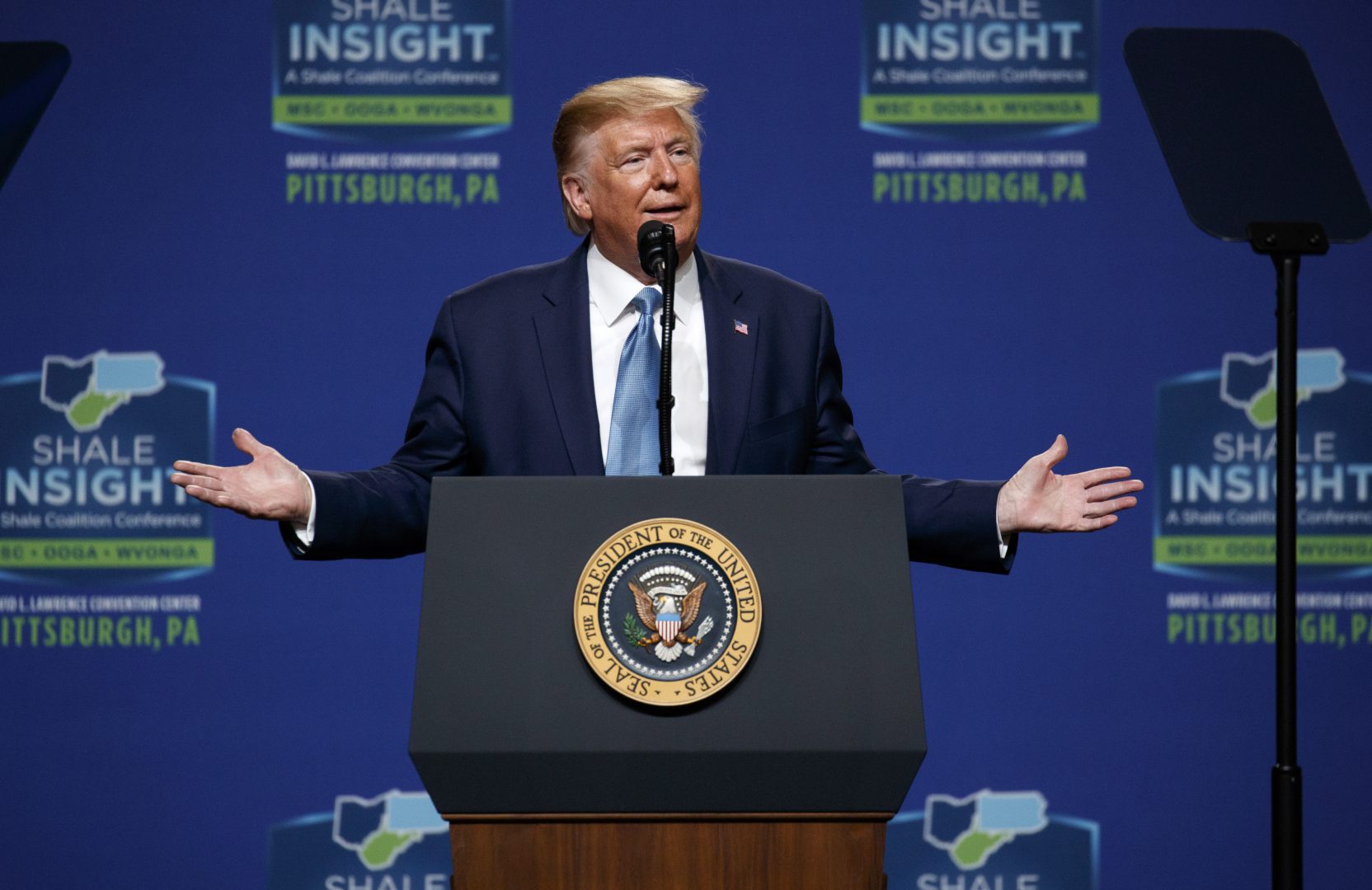 President Donald Trump returned to Pittsburgh Wednesday, just two months after speaking in Beaver County – and his speech at this week’s Shale Insight conference picked up right where his Beaver remarks left off.Both speeches offered Trump’s patented blend of campaign rhetoric with occasional digressions into his scripted remarks about the power of American energy – specifically the development of natural gas in shale deposits in Pennsylvania and elsewhere.

“We believe the United States should never again be at the mercy of a foreign supplier of energy,” Trump said near the conclusion of an hour-long speech at the David L. Lawrence Convention Center. “We are committed not only to energy independence but to American energy dominance. And the path to that future starts right here in shale country.”

Trump appeared at the same conference in 2016, and he said that as president, “Today I am proud to declare that I have delivered on every single promise I made to this conference three years ago and much much more.”

The growth of American natural gas predated Trump’s election, but it has continued since. And Trump said his deregulatory policies – which include abandoning environmental initiatives begun by former President Barack Obama – were the reason.

Trump cited a number of regulatory burdens he had cast aside, including Obama’s Clean Power Plan to reduce power-plant emissions of carbon dioxide, which contributes to global warming. He also revisited an old foe: the Paris Agreement to reduce such emissions globally.

The agreement is a voluntary compact among 200 nations to reduce their climate emissions – an effort to reduce climate-change effects like melting polar ice caps, sea level rise, and extreme weather conditions that scientists say are already taking hold. The United States could begin the year-long withdrawal process as early as next month.

Trump’s gibe repeated one he made in 2017, when he announced his intention to withdraw from the agreement and said,  “I was elected to represent the citizens of Pittsburgh, not Paris.”

Peduto was similarly dismissive after Trump’s speech Wednesday. In a statement, he called Trump’s remarks “wrong, and stuck in an outdated 19th century mindset. The Pittsburgh region is thriving and has moved on to a 21st century economy based on technology and clean energy production. President Trump’s outdated vision for Western Pennsylvania and the Rust Belt would put the final nails into the coffin of those struggling communities his economy has left behind.”

But Trump was having none of it, saying that while he supported clean air and clean water, “what we won’t do is punish the American people while enriching foreign polluters.” Borrowing from a campaign slogan, he said, “It’s called America First, finally.”

Indeed, Trump made a series of remarks – often delivered with more glee than his scripted comments on energy – that were overtly political, and seemed to be made with an eye toward the 2020 election.

“Many politicians in our country are targeting your industry and your jobs for literally total destruction,” he said. “Is it on purpose? Is it stupidity? Is it through evil? … Virtually every leading Democrat has pledged to entirely eliminate fossil fuels. These Democrat plans will obliterate millions of American jobs, devastating communities across Pennsylvania and bankrupting families all across our nation.”

At one point, Trump even apparently endorsed a Republican rival to local Democratic Congressman Conor Lamb – though the Republican he named, author and frequent Fox News guest Sean Parnell, has yet to formally announce his bid.

Trump said Lamb was among the “do-nothing Democrats” and complained that Lamb “never votes with me, ever ever ever. … Conor Lamb wants to take away your guns.”

Trump also touched briefly on his own political travails, which include the House Democrat-led impeachment inquiry and criticism of his willingness to let the Turks displace Kurdish allies in Syria. “I have witch hunts every week,” he said. “They can’t beat us at the ballot box, so they want to beat us the old-fashioned way.”

Trump said he was fighting for Americans “above all others” in “every action I take, from defending American energy to securing American borders, to ending the endless wars.”

His re-election hopes in 2020 depend on convincing voters that he deserves credit for the nation’s long-running economic expansion.

Unemployment rates in western Pennsylvania and elsewhere are at or near historic lows. And the U.S. now out-produces top rivals Saudi Arabia and Russia in the production of oil and natural gas. In a call with reporters Monday, administration officials touted a number of byproducts of that success, noting that oil prices remained steady even after a missile strike on Saudi Arabian oil centers.

But in a lunchtime call with reporters prior to Trump’s arrival, Democrats insisted that many of his promises had been broken.

Residents “deserve a lot more than endless broken promises that Donald Trump and Mike Pence … have promised,” said state Rep. Austin Davis, who represents McKeesport and other areas of the Monongahela Valley. “If we want to be disappointed, we’ll watch the Steelers or the Eagles.”

In fact, growth in manufacturing has lagged, especially in Pennsylvania, which lost 8,000 manufacturing jobs in the past year, according to federal statistics. The effect of Trump’s tariffs on steel imports has proven decidedly mixed in western Pennsylvania and elsewhere. Coal mining’s modest job gains have done little to reverse the industry’s long-term decline – much of which can be attributed to the rise of natural gas.

Rick Bloomingdale, the president of the state AFL-CIO, told reporters on the Democratic press call that it was “insulting” that Trump came to Pittsburgh. While he didn’t contest that there had been growth in the natural gas business, “He’s abandoned other sectors of the energy industry,” citing the pending shutdown of Beaver County’s Bruce Mansfield coal-fired power plant next month.

Trump’s accomplishments were also being debated sharply in the streets outside the convention center, where a series of demonstrations denounced Trump for his environmental and other policies, while calling for his impeachment. The first took place at 8:30 a.m., a “Solidarity Defeats White Nationalism” rally at Gateway Center in which Tammy Hepps tied Trump’s anti-immigration policies to the xenophobic rhetoric of the alleged gunman in the Tree of Life synagogue shooting last September.

“You had a year to change your ways,” Hepps said. “Instead you doubled down on the lies and rhetoric that incited the violence in our city.”

But others turned out to support Trump. Among them was Nick Wells, who said he was a veteran and a student at Triangle Tech. He said Trump had improved healthcare for servicepeople, and said people should “support our president because he’s our president whether you like him or not.”

Today’s visit was an official White House event, rather than a campaign stop. But the back third of the convention center hall was filled with Trump supporters, many wearing Make American Great hats as they cheered the president on.

Executives at the convention, whose issues were often pushed to one side when Trump discussed his own political prospects, were far more reserved.