Mike Campbell, a college biology professor, is seen on Sept. 11, 2019, in a boat launch area with a smokestack of Erie Coke visible in the background.

An Erie biology professor felt like he couldn’t control what’s happening in Washington. Then he led a campaign against a polluting coke plant in his community

Fight isn't over yet for Hold Erie Coke Accountable

(Erie) — Some of the wildflowers in the overgrown field reach Mike Campbell’s head.

He walked through them one recent day, pointing out where to watch for railroad tracks, as he got closer to Erie Coke.

It’s an industrial plant on the shore of one of the Great Lakes where workers turn coal into a key ingredient for steel manufacturing. The operation has a long history of environmental violations, and it survived a shut-down attempt by state regulators almost a decade ago.

It’s now being targeted again — in part thanks to Campbell and a group he helped start.

When Campbell reached the fence line for the Erie Coke plant, the 64-year-old college biology professor and part-time activist saw a red smokestack and an area where workers bring coal.

He picked up a smell.

“We’re getting a whiff of air pollution right now that I’ll probably end up sending in a complaint,” Campbell told a reporter.  “….It smells like a mix of rotten eggs and fresh tar.” 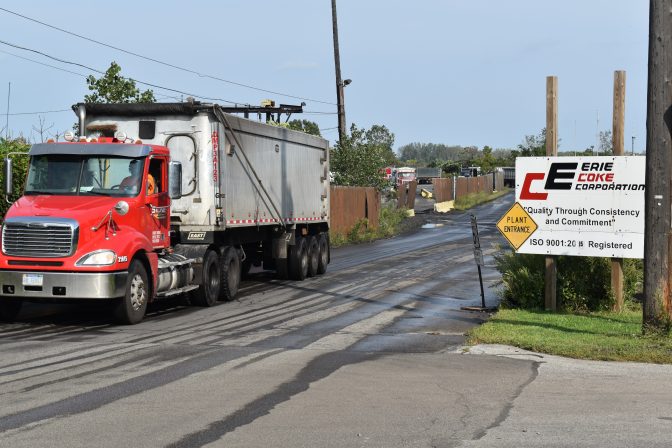 A truck leaves the Erie Coke plant in September.

More than a year ago, Campbell and other members of a group called Hold Erie Coke Accountable launched a public campaign to put increased pressure on the plant — and state regulators.

In July, the state Department of Environmental Protection denied the company’s application to renew an operating permit and filed a complaint in the Erie County Court of Common Pleas to shut it down. DEP said the plant was unable or unwilling to comply with state and federal law.

That got the attention of environmental activists in other areas of the state.

“I was a little surprised to see such aggressive action,” said Rachel Filippini, executive director of Group Against Smog and Pollution, based outside Pittsburgh. “But I was pleased to see that state regulators are taking this issue seriously.”

Erie Coke appealed DEP’s decision, and a judge recently ruled that it can remain open if it meets certain conditions.

So the fight isn’t over.

At Erie Coke, shipments of coal are blended together and put in ovens.

Inside the plant, workers heat coal at extreme temperatures — about 2,000 degrees — to burn off impurities. Then they quench the product in water to cool it down, size it for different customer needs, and ship it out.

But that process also creates emissions, including benzene, a chemical that increases the risk of developing leukemia and other blood cell cancers.

And state regulators with the Pennsylvania Department of Environmental Protection say the plant has allowed too many pollutants to enter the air.

The plant was nearly shut down in 2010 for what a state regulator called a “pattern of defiant behavior and complete disregard for the health of our citizens and the quality of our natural resources.”

A judge allowed the plant to remain open. DEP says a court-ordered settlement required the plant to pay a $4 million fine and make upgrades to address pollution.

But problems at the plant have continued.

In May, the department put increased pressure on the plant, saying it had nearly 80 unresolved air violations over two years. That includes what the DEP calls visible emissions — the smoke was too thick. 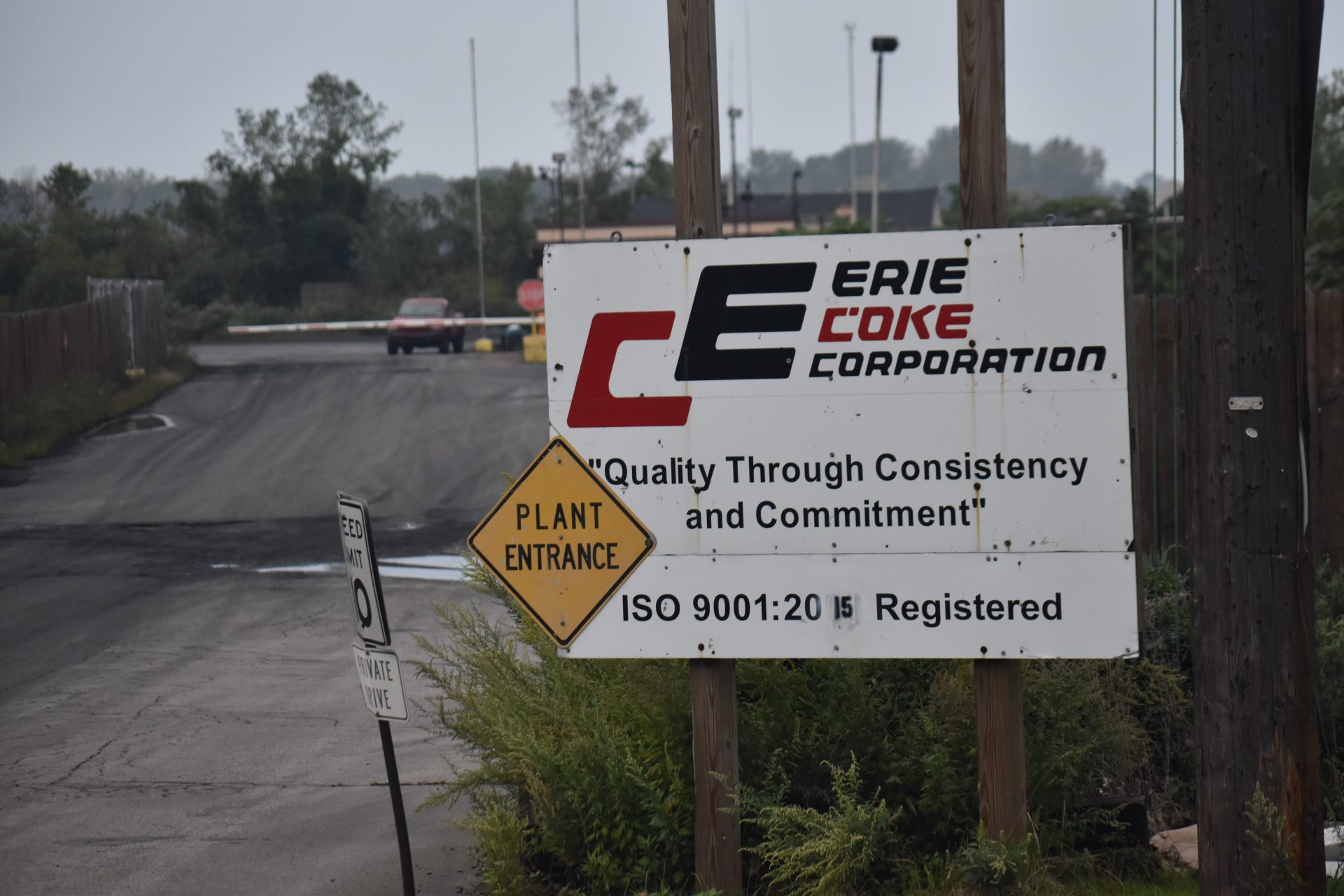 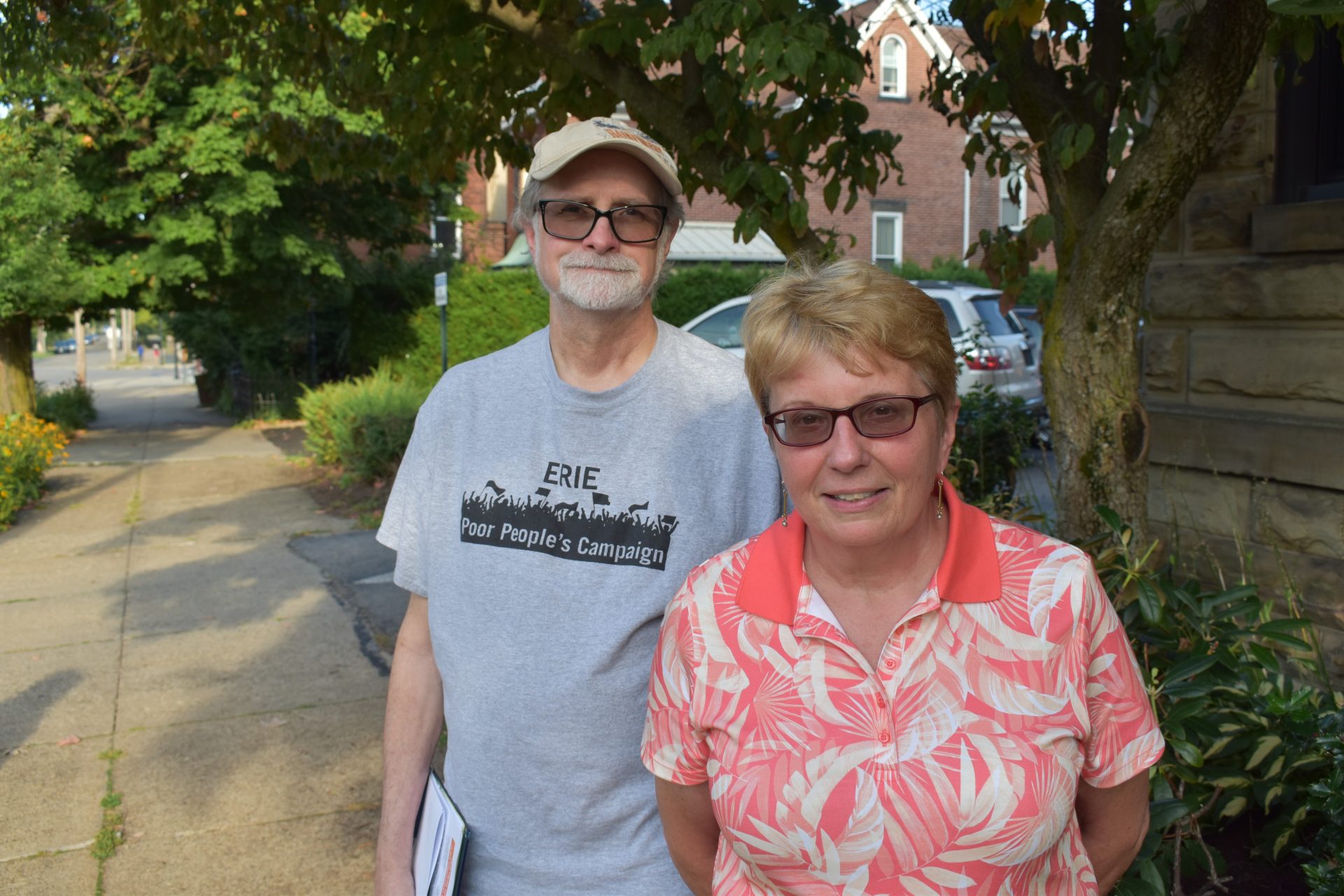 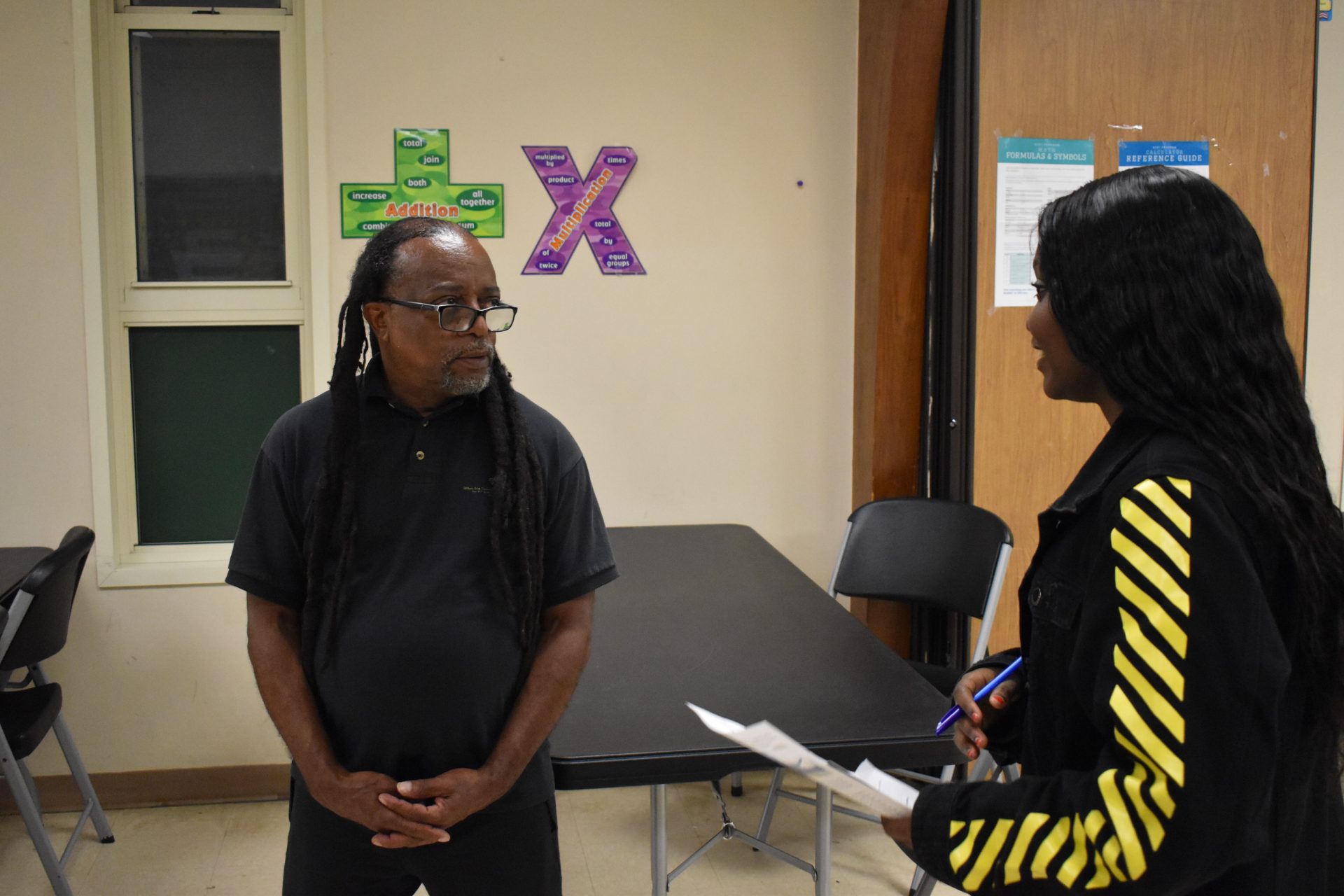 Gary Horton, president of the Erie NAACP, speaks with Shukuru Lusi, following a meeting of the Eastside Grassroots Coalition. Horton has worked with members of Hold Erie Coke Accountable and appeared in a video the group created. Lusi, who lives in Erie and attends Gannon University, has concerns about pollution at Erie Coke. “I think a lot of people’s eyes are starting to be open,” Lusi said. 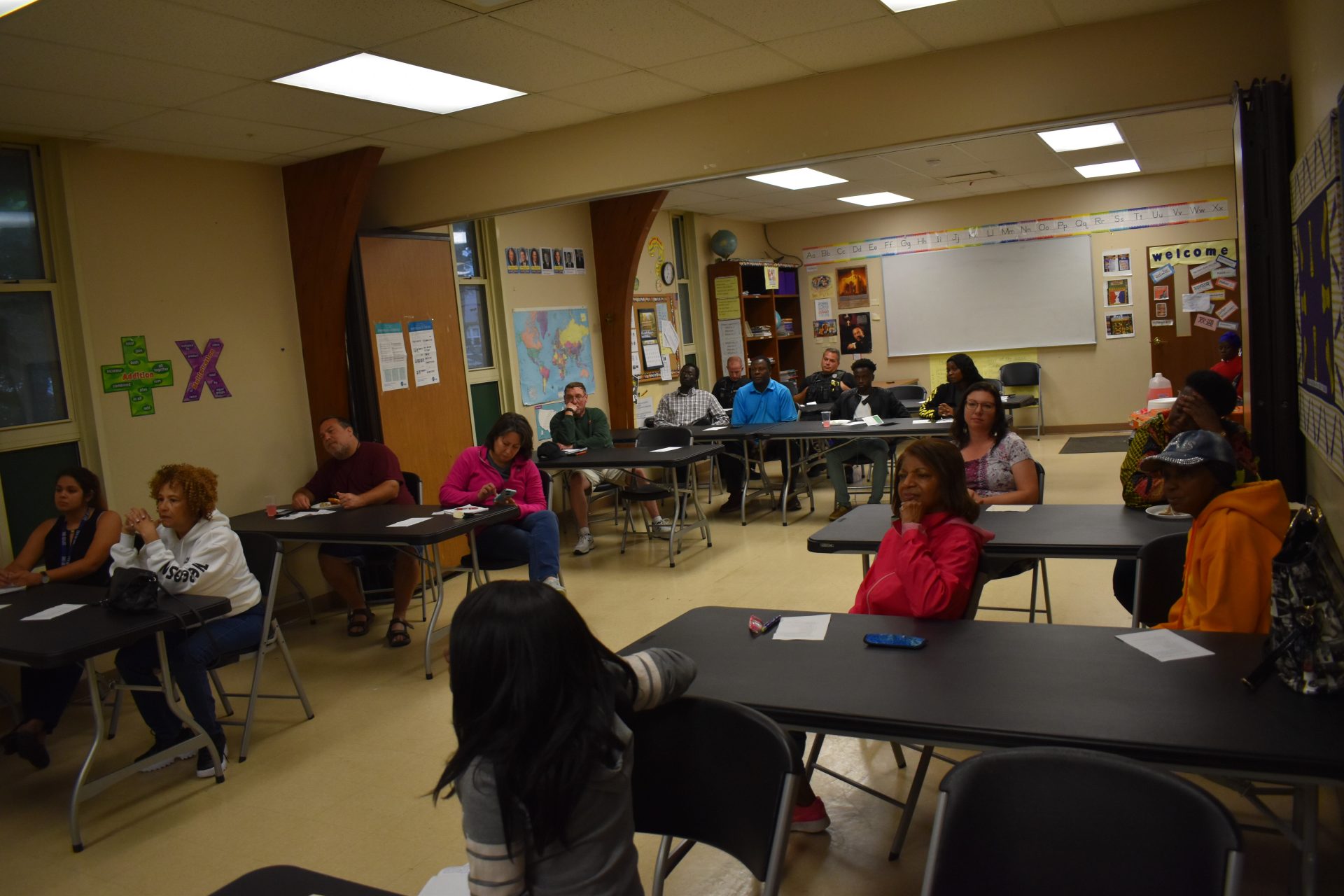 An update on Erie Coke was on the agenda of the Sept. 12, 2019, meeting of the Eastside Grassroots Coalition. 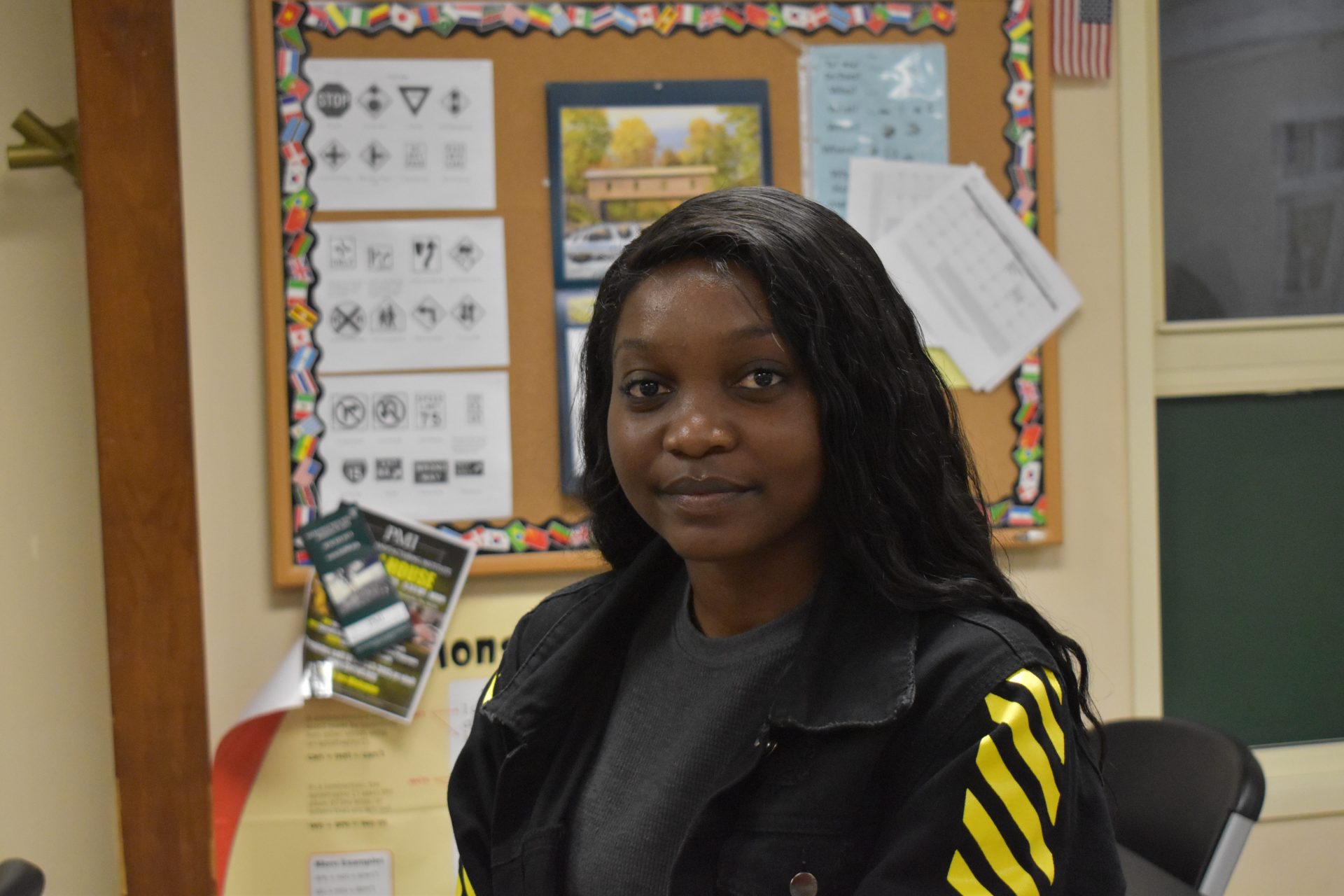 Concern over Erie Coke was one of the reasons Shukuru Lusi attended a recent meeting of the Eastside Grassroots Coalition. 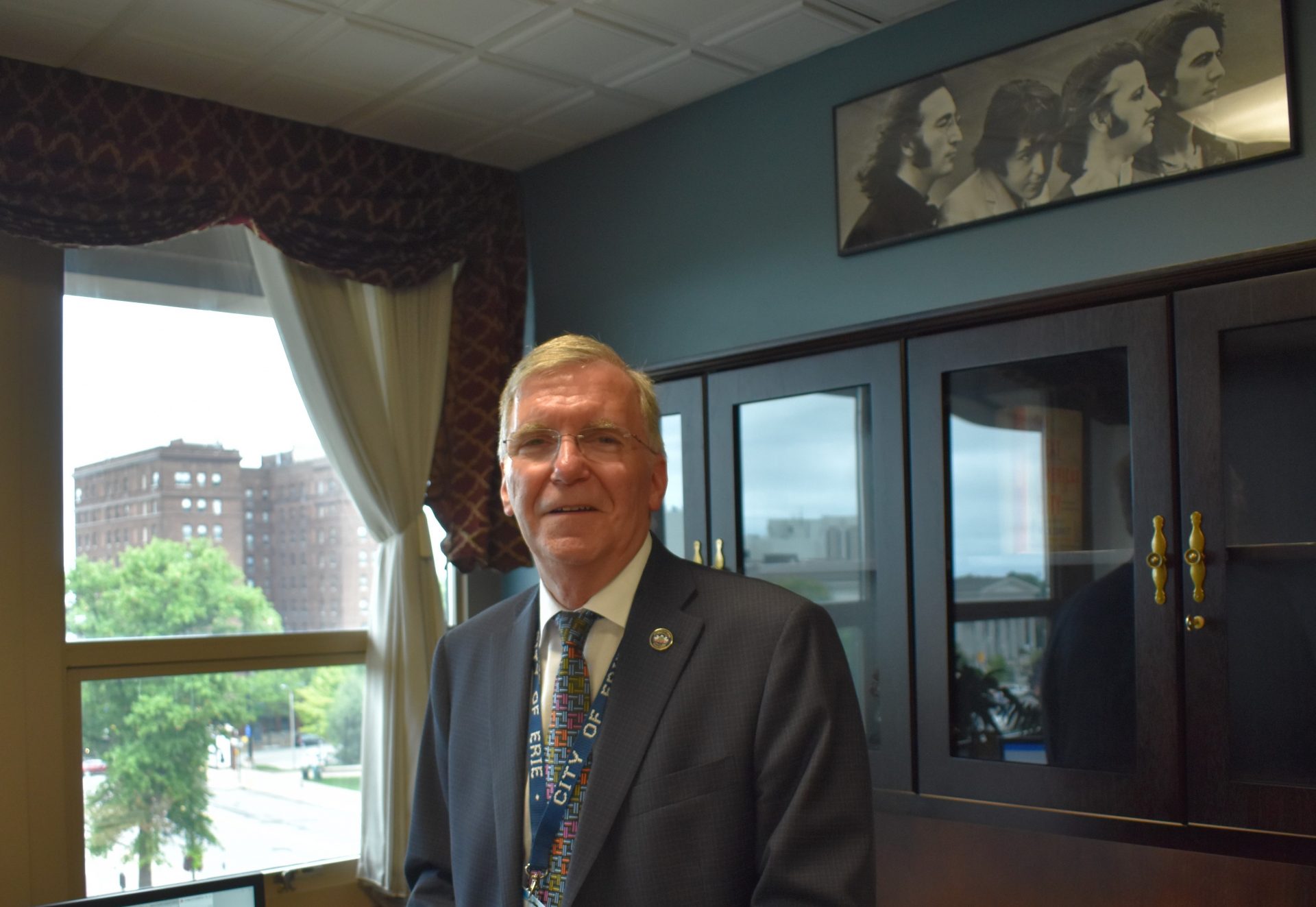 Erie Mayor Joe Schember stands in his office in this file photo. 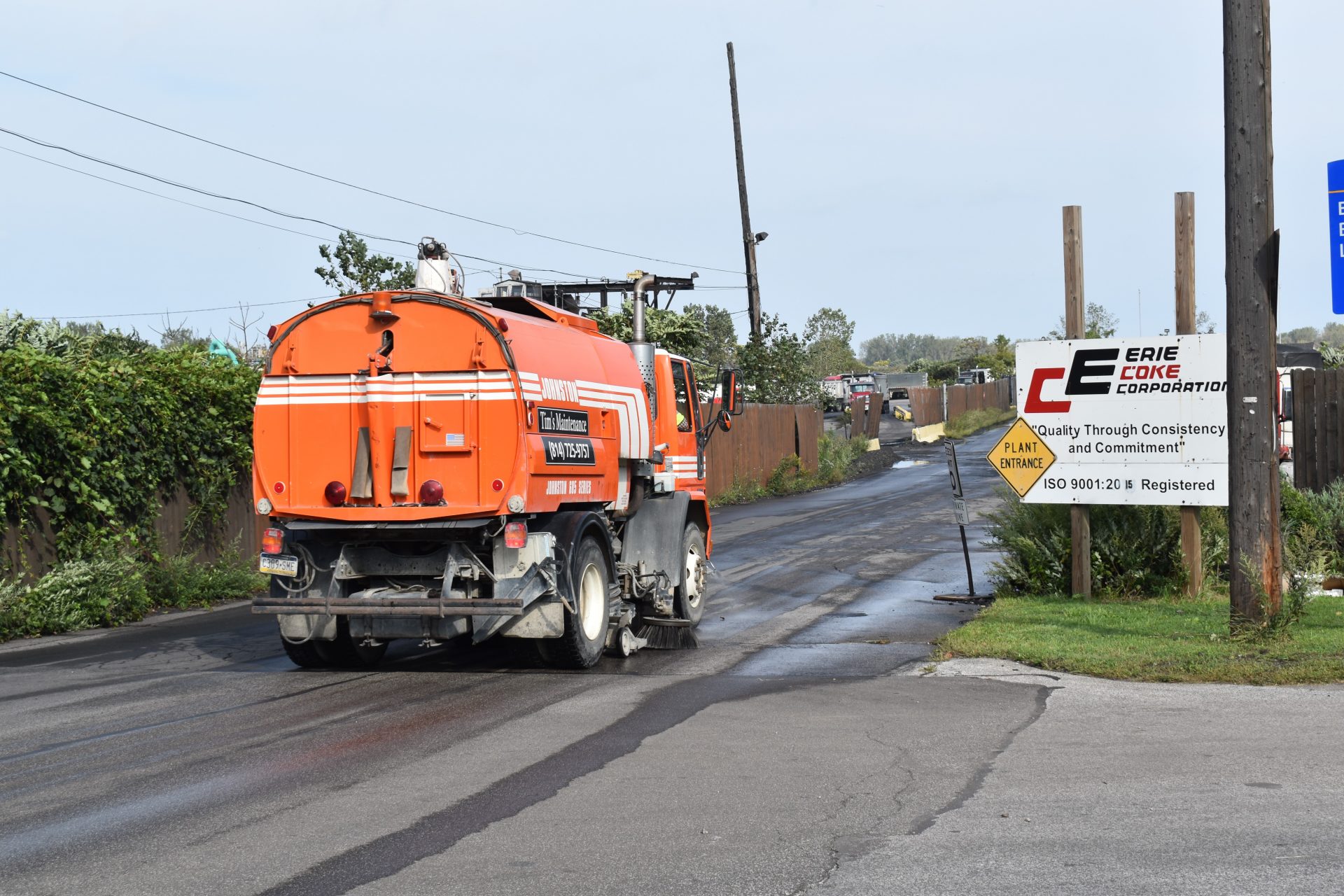 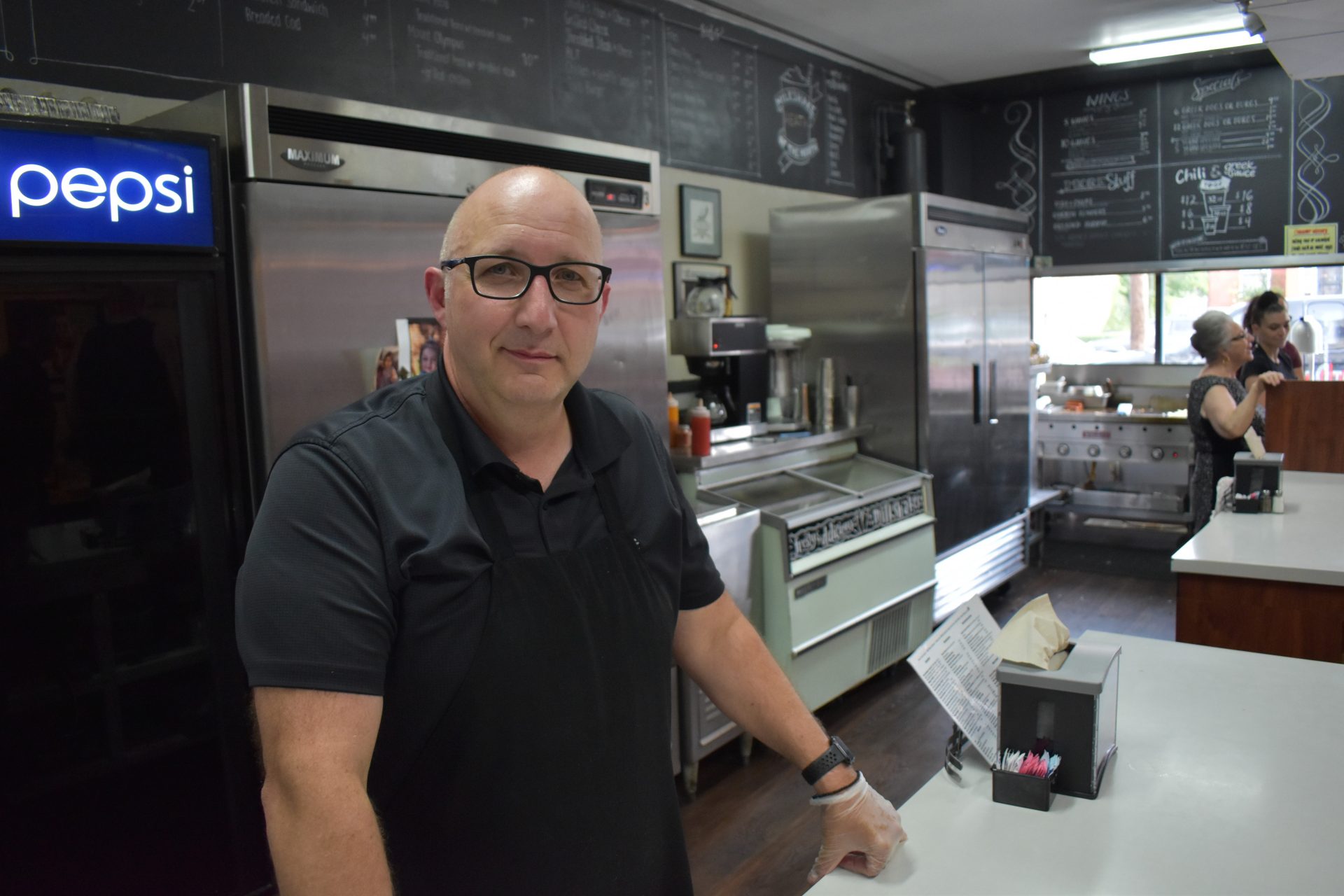 Gus Paliouras’ family’s restaurant, New York Lunch, on the 900 block of East Avenue in Erie is less than a mile from Erie Coke and used to be open about 150 hours a week — now it’s open about 47 hours. As more manufacturing plants have closed, the restaurant has cut back its hours. Erie Coke closing would have a relatively small impact on his business. “But … when you have a series of small impacts, it ends up being a big impact,” he said.

Separately, DEP estimates that over 30,000 gallons of wastewater from the plant was improperly released at the end of March. DEP suspects that wastewater included several harmful chemicals, including benzene and cyanide.

Then, on July 1, DEP took what it called a “rare” step of attempting to shut down the plant.

It is tough to say just how influential Hold Erie Coke Accountable was in DEP’s decision to act against the plant.

Patrick McDonnell, secretary for the DEP, says the department’s decisions are about the law and science. But people can help it investigate problems by making complaints.

“We’re not going to be out there, anywhere, 24/7,” McDonnell said. “So having people within communities aware and communicating with the department is absolutely essential.”

That’s where Campbell and Hold Erie Coke Accountable come in.

Campbell grew up in the Harrisburg area and went to graduate school in Texas.

After he and his wife had their first child, they decided to move closer to family. Erie County, about a five-hour drive from Harrisburg, was close enough.But for his work as an aquatic biologist, Erie turned out to be perfect.

In April 2017, Campbell attended a climate change march — it started at a boat launch near the Erie Coke plant. Protesters yelled “Erie Coke is a joke!” and “Where’s our home? Earth. How do we want it? Safe.”

That experience helped renew Campbell’s interest in the plant. He was already feeling frustrated by environmental deregulation efforts by President Donald Trump’s administration at the federal level.

“Me personally, you know, I felt like I can’t control what’s happening in Washington,” Campbell said. “But I can definitely get involved in my own community.”

‘Any kind of pressure’

In late 2017, Campbell joined a stakeholders group created by the DEP as part of a permit renewal process for Erie Coke.

Campbell joined. So did Pat Lupo, a Benedctine sister.

Lupo didn’t think enough people from the Erie Coke neighborhood were represented in the group.

“If we were going to really try to put any kind of pressure on DEP or Erie Coke … we needed to have a group that was separate from the stakeholders group,” Lupo said. 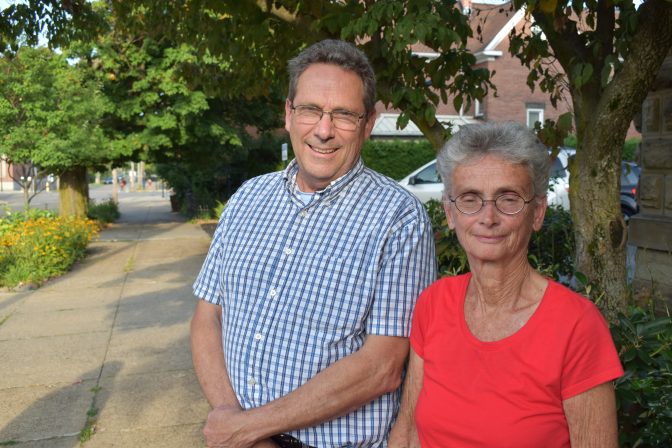 Hold Erie Coke Accountable leaders Mike Campbell and Sister Pat Lupo have helped the group put pressure on the plant and on regulators.

So Lupo and Cambell became leaders of Hold Erie Coke Accountable in the summer of 2018.

Group members created a website and Facebook page. They raised about $15,000 from environmental groups, an Erie-based foundation and some other donors they haven’t identified publicly.

Some of that money helped pay for legal and consulting work GASP provided, and some of it went to create a video about the plant.

Members showed up to community meetings and hosted their own.

“The HECA group definitely … brought it to my heart,” Schaaf said. 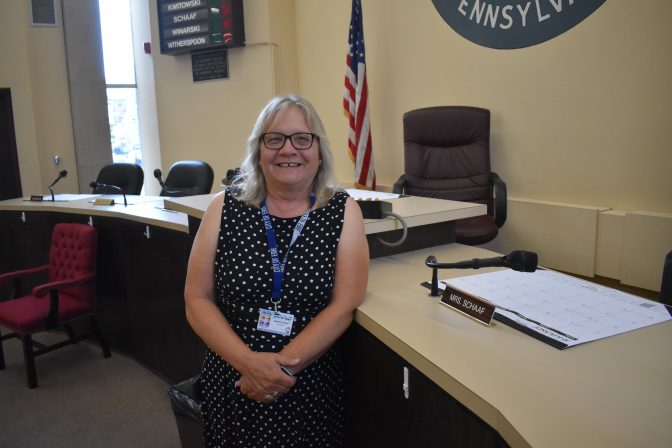 One issue that looms large in the debate over Erie Coke is jobs.

Erie’s mayor, Joe Schember, wrote a letter to Democratic Gov. Tom Wolf, saying that, while he would hate to lose the jobs at Erie Coke, “if the plant is polluting the air and water at dangerous levels that adversely affect the health of our residents, we cannot permit them to continue.”

Erie County Council passed its own resolution in April. Most of it focused on environmental violations and health risks.

But Kyle Foust, an Erie County Council member, sees an economic downside to the plant’s violations.

Erie County still has more manufacturing jobs, on average, than the rest of Pennsylvania. But its economy is less reliant on them than it used to be, Foust said, and the community has worked to make its waterfront more of an attraction for residents and tourists.

Erie Insurance is the county’s largest employer, and the Fortune 500 company is working on expanding. Foust said hospitals, higher education and technology are all important to Erie’s future.

“As those jobs come in, they’re attracting the type of people that want to be able to live in clean communities,” Foust said.

Nesselbeck, environmental director for Erie Coke, says coke plants are important for the local and national economies. He said the United States shouldn’t just rely on other countries for manufacturing.

“I can see, you know, someone raising a fuss if all of a sudden the nice little field behind their house — someone comes in to build the coke plant,” Nesselbeck said. “But you got to have industry somewhere. So why not have it where it has been sitting for the last 100 years?”

Over the summer, Erie Coke and the state DEP fought over the plant’s future.

At a hearing, Steve Narusewicz testified that whenever a strong wind blows from the direction of the plant, he and his family feel the effect in their home about 200-300 yards away.

“When this occurs, he and his family are forced inside the house and shut all of their windows to keep the cloud of dust, and the odors associated with it, from coming into their home,” DEP attorneys wrote in a post-hearing brief.

Erie Coke attorneys countered that DEP failed to prove it was the sources of smells people complained about, and wrote that “the citizen accounts, while undoubtedly sincere, do not establish that Erie Coke emissions threaten public health or welfare.”

In August, a judge ruled that the plant can stay open until at least February if it meets certain conditions. The DEP challenged the ruling, but lost.

In the meantime, DEP, which installed air monitors outside Erie Coke in July based on community feedback, said on Sept. 18 that benzene levels were higher than allowed. The department is investigating whether the benzene came from the plant or other sources.

Nesselbeck, who was hired as environmental director earlier this year, said the plant is working on changes to comply with environmental regulations.

Campbell, Lupo and their group are working to gain more support in the medical and business communities. And they’re going to continue watching for dark clouds or odd smells from the plant. 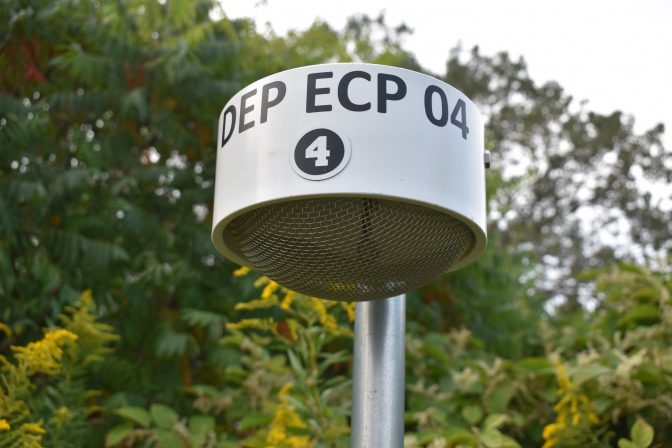