A crowd gathered to hear discussion about climate change adaptation, resilience, and social equity at the University of Pennsylvania’s Kleinman Center for Energy Policy on Thursday, Sept. 12 in Philadelphia. The event was produced by StateImpact Pennsylvania, WHYY and the Kleinman Center.

What we learned from StateImpact Pennsylvania’s forum in Philadelphia on climate change adaptation, resilience, and social equity 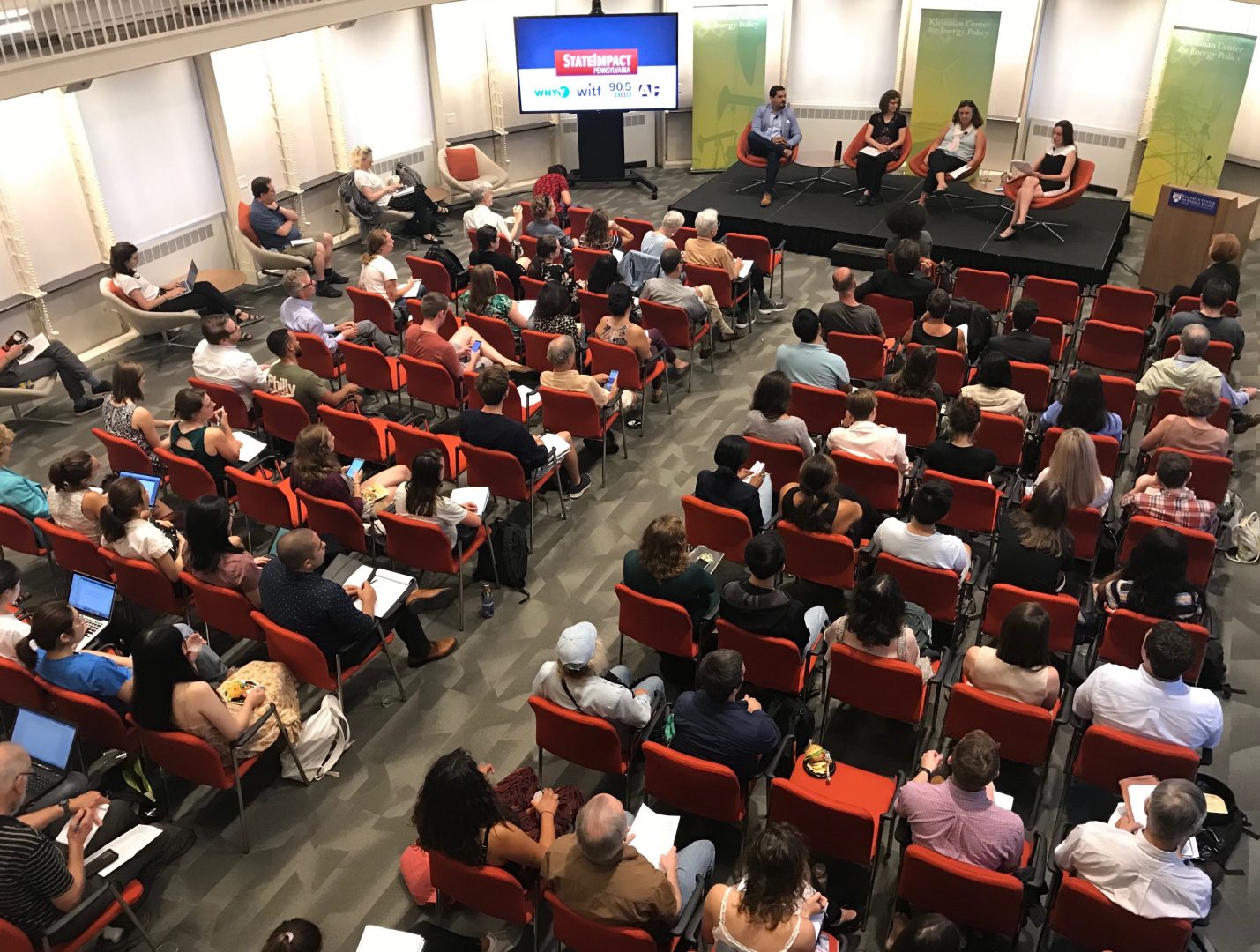 A crowd gathered to hear discussion about climate change adaptation, resilience, and social equity at the University of Pennsylvania’s Kleinman Center for Energy Policy on Thursday, Sept. 12 in Philadelphia. The event was produced by StateImpact Pennsylvania, WHYY and the Kleinman Center.

Three panelists with expertise in research, policy, city planning, and communications discussed their successes working on local climate change issues, as well as the challenges and shortcomings of climate action, during an event Thursday at the University of Pennsylvania’s Kleinman Center for Energy Policy in Philadelphia.

The event was produced by StateImpact Pennsylvania, WHYY and the Kleinman Center and moderated by Susan Phillips, reporter for StateImpact and WHYY.

Herb called climate change an “exacerbator” of social inequities. She said that the effects of climate change — like an increase in the number of hot days and routine flooding — will have the most effect on people who already live in overcrowded, unsafe housing conditions, or neighborhoods without shade, or who don’t have access to social services or transportation, and will make those problems worse.

“So, think about it. If you work an hourly wage job, and you can’t get to it because of flooding, you just don’t get paid,”  Herb said.

Another example she gave: If you can’t afford to buy an air conditioner, and you have a respiratory condition, increased ground level ozone on really hot days could send you to the ER. And maybe you don’t have insurance.

Addressing these underlying social inequities will create more resilient communities that will be able to bounce back more quickly from a major disruption, like a heatwave or storm, she said.

To achieve this, Herb said the most important thing for policymakers is to listen to communities. She recommended that groups working on climate change spend time asking community members about their lives, their fears, their homes, and their ability to stay or leave first, rather than coming in to a community and immediately making suggestions for adaptation strategies.

“The communications aspect of this is the most critical aspect. Take that seriously.”

As the host of a show on the only black-owned talk radio station in Pennsylvania, Ellison is intimately familiar with the challenges of communicating climate change to audiences outside of traditional environmental circles.

Ellison said when he first started talking about the environment on his show, he used to get made fun of. He said the response was, “Why are we talking about this? It’s a white people issue.” But the more Ellison started to talk about the connection between things like heat, pollution, and air quality, and the high rates of asthma and cancer in black and brown communities, the more his audience got it. 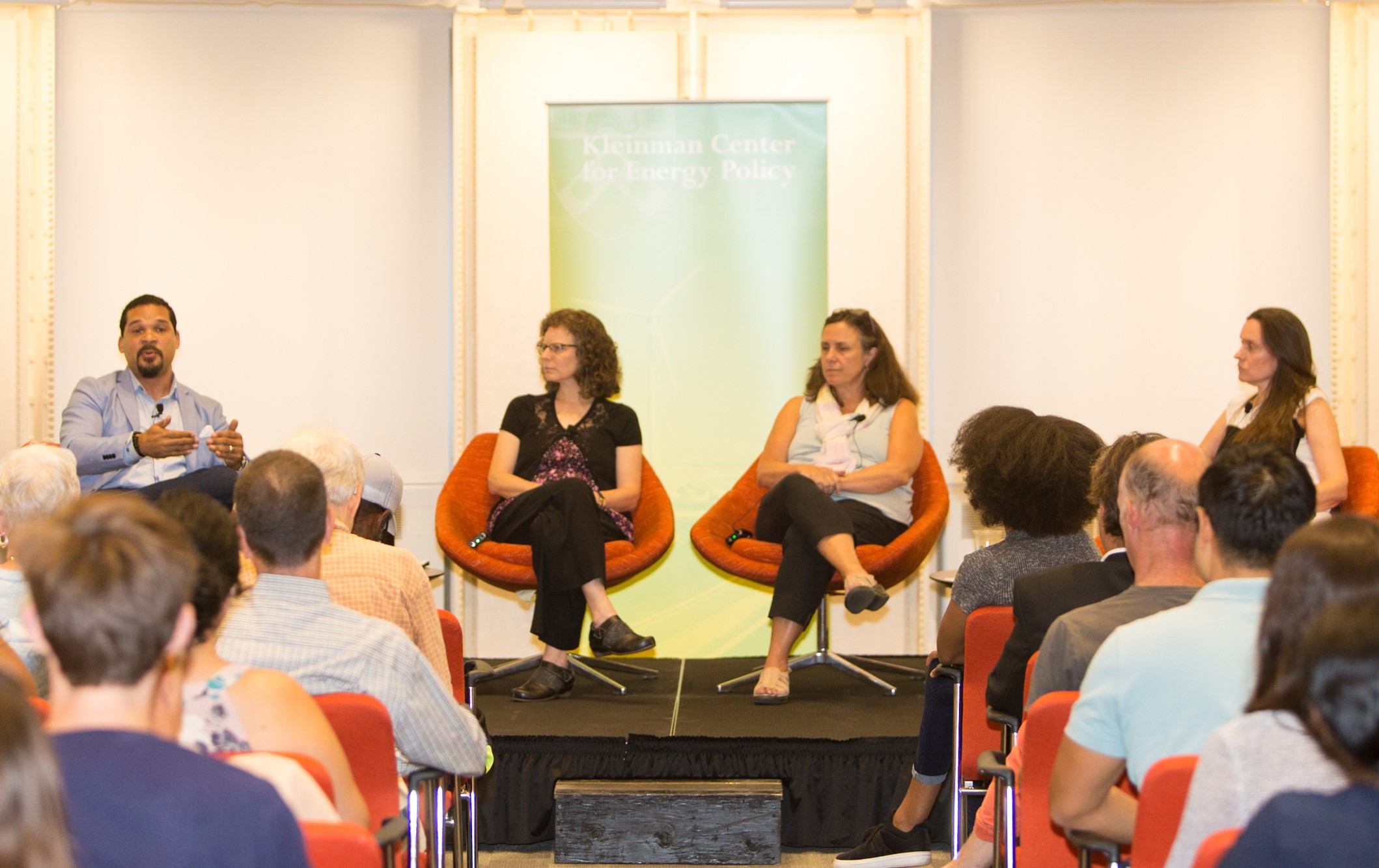 Paul Papier / For the Kleinman Center for Energy Policy

Ellison sees gaps in communication all over the place. He said, for example, that on the city of Philadelphia’s website, it can be difficult for people to find the resources the city offers. “When I go to Phila.gov, I want a place on the homepage that shows the 1,000+ places you can get free food in the city,” he said. That lack of accessibility trickles down to things like public meetings that aren’t adequately advertised but where policies important to communities are discussed.

Ellison also said there is a lack of public dialogue about climate change from cultural icons like black filmmakers Ava DuVernay and Tyler Perry, and talk-show host Steve Harvey.

But he said famous people aren’t the only ones who need to get on the mic. Because so many people start their morning by checking the weather on TV, Ellison encouraged the audience to call local TV news affiliates and demand that weather forecasters start acknowledging climate change in their reports.

“The harder it is to park your car, the less likely it is for you to use your car.”

Seaman spoke about several ways that policy and design can nudge people toward lower-carbon lifestyles.

She said the Philly CarShare program helped 25,000 people either give up their car or forego car ownership.

When people gave up their personal vehicles and used Philly CarShare instead, they started evaluating whether they really needed to drive before they just got in the car to go somewhere. She said they surveyed participants throughout the program, and saw an increase in people choosing to bike, walk, or take public transportation.

Similarly, when asked what the most impactful thing individuals can do to tackle climate change locally, Seaman suggested supporting dense development in zoning law. She said there’s always a lot of pushback to dense housing projects, but noted it tends to create more walkable, bikeable environments that do not require cars.

Seaman said she plans to bring a climate action platform to the Philadelphia city council that she says addresses many of the underlying inequities that Herb spoke about. One policy proposal is a new city department focused on planting and taking care of trees. Tree-filled streets solve several equity concerns, she said, and that type of policy would create jobs and would have health benefits by encouraging people to go outside more, walk more, bike more.

The StateImpact Pennsylvania event followed a Kleinman Center forum with Vox’s David Roberts and Rafe Pomerance about national climate action efforts. Pomerance is chairman of Arctic 21, which describes itself as a network of organizations focused on communicating the unraveling of the Arctic as a result of climate change to policy makers and the public. Watch a video of that conversation here.